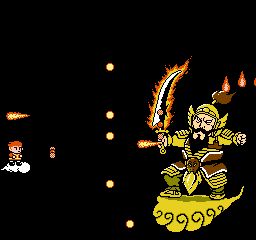 Cloudmaster was one of the last Sega Master System games I ever played and it was kind of a bittersweet send off for the little system that could. It wasn’t an especially good game but it certainly stood out due to its setting. While it isn’t based on Journey to the West it certainly has that vibe. While it was released in the US for Sega’s console its Famicom port was left behind. Honestly with the wealth of quality shooters available in America we weren’t missing anything as it shares the same flaws as its arcade parent; it’s boring.

While Chuuka Taisen isn’t based on any particular story its influences are pretty clear to see. You control Michael Chen (right), a Monkey King style character who rides a flying cloud through ancient China defeating ever so racist enemies such as flying ramen bowls and a few bucktoothed, slanted eyed enemies that are a callback to the types of propaganda used to demonize China during World War II.

There are a few sparse power-ups dropped by enemies that will increase your speed and change your shots to a double shot or a wider shot. Neither one pack any real punch so you’ll end up relying on the secondary weapons more. Every level has two shops that offer your choice of four weapons that have a variety of effects, from bombs to bouncing grenades, wave beams, and even a four way shot. These all have unlimited ammo so you can spam them infinitely however they are slower than your default shots. Each shop also has a rotating set of weapons making it worthwhile to check out each one regardless of how much you like your current selection.

Chuuka Taisen’s problem is pacing and the lack of any real excitement. It never becomes as bad as something like Blaze On but there are periods where little to nothing is happening before suddenly exploding into a ballet of bullets. Each level follows the same general flow, with a few waves of enemies and ground targets and at about the 50% and 75% mark a stronger demon will appear who will grant access to the shop once defeated. The level design does very little to make use of its setting with the same background elements repeated ad nauseam to stretch out each stage. They don’t even try to hide it cleverly either; if it weren’t for the different enemies you’d think something was wrong and the levels repeated infinitely.

Despite the odd pacing this is a pretty tough shooter. When the enemies do attack its always in packs that move in odd formations that are hard to judge. Power-ups drop pretty frequently but it is easy to develop tunnel vision and fly head first into a group of bullets. Your standard shots are weak and even when powered up still don’t feel as though they pack the necessary punch they should. The bosses have easily identifiable patterns yet you’ll probably still die in the execution of their demise. Death kicks you back to a checkpoint sans power-ups but your chances of survival aren’t as dire as something like R-Type.

Whether it was intentional or not the Famicom version of Chuuka Taisen is interesting. While the Master System version is definitely superior it still holds its own visually. Due to the console’s limitations the overall color palette has been reduced. Most of the background details are still there but a bit washed out and it gives the graphic direction a Sumi-E vibe that is fairly distinct. While it does give the graphics a unique flair they are also let down by repetitive architecture. The bosses are all fairly large sprites that look impressive but are barely animated, which is disappointing.

This is pretty short even by shooter standards and even though it puts up a fight most will have it beat in one afternoon. At the end of the day Chuuka Taisen isn’t so much a bad game as it is disappointing and just average. But considering its arcade counterpart was the same you could make the argument that they were aiming for accuracy when porting it but that still doesn’t make it worth playing. Regardless it was popular enough to end up ported to numerous platforms and while I find this Famicom edition mediocre its PC Engine counterpart is a legitimately good game. Go for that if you are genuinely interested in this game.