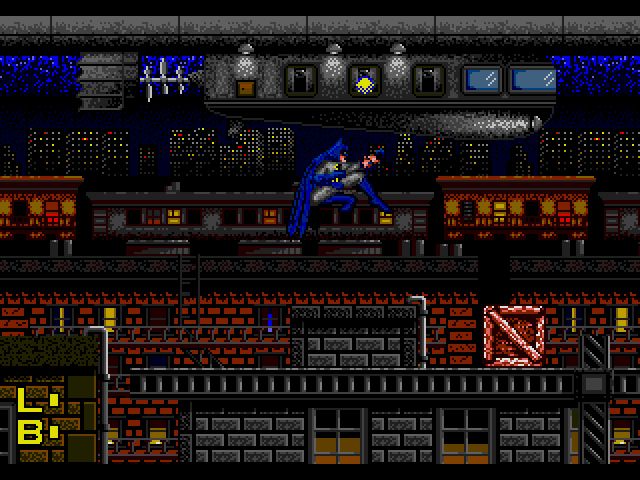 Of all the publishers entering the 16-market I’m sure many like myself were anticipating what Sunsoft would cook up on the new platforms. As one of the most technically proficient developers during the 8-bit era many of their releases would go on to become videogame classics. While they would create many a fine game during the 90s something was lost as they seemed to rely heavily on that Looney Tunes license. One of their first releases was a port of the stunning Batman Return of the Joker which should have been cause for celebration but was so terrible the SNES version was cancelled.

The NES incarnation of this game is easily in the top ten best looking games for that console and could pass for an early 16-bit title outside of its limited color palette. Sunsoft pulled off some real technical magic to produce those visuals with large sprites, many layers of parallax scrolling, and blazing fast shooting segments. It had its problems to be fair but was a solid title nonetheless.

The Sega version, produced by Ringler Studios, has very little of that and is somehow worse. The visual style of the game is all over the place and seems to pull from numerous sources and as a result comes across unfocused. The sprites are the same size as the Nintendo game but sport more detail except they now look silly, like midgets wearing costumes. Due to the system’s limitations the original game was highly stylized and it worked; the darker color palette really suited a game starring Batman. The color palette is brighter and cheerier here and just doesn’t fit. The increase in resolution really amplifies the game’s flaws; the NES game was visually consistent in its presentation and is why it worked so well.

The only visual highlight comes from the game’s backgrounds which when divorced from the color palette have definitely been spruced up. There are many more layers of parallax scrolling which is always a visual delight. There are a few that are simply ugly though. There are some levels that use a gradient for the skyline that are absolutely hideous to see in motion.

Gameplay wise Revenge of the Joker differed from Sunsoft’s first Batman game in that it focused on projectile combat rather than melee attacks. Batman is permanently armed with a Batarang launcher on his arm that can be upgraded with new armaments such as a homing batarang, a cluster that explodes on contact and heavy batarangs that fire in an arc. You could also charge them up to produce different effects. A new melee kick has also been added for some god forsaken reason and is completely useless. It was a bold design decision and one that didn’t entirely work since each weapon felt wholly inadequate to deal with the opposition. They are either too slow or too weak and unfortunately you’ll need pick one as the default weapon is doesn’t quite cut it.

What brought the game down originally was its frustrating level design and spotty collision detection, both elements that are actually even worse this time out. Every level is filled with cheap attacks that you will never see coming, from the spiked balls in stage 1-1 to the sudden missile strikes at the start of stage 3-1. It forces rote memorization of every inch of each stage just to survive since there are no health power-ups or checkpoints. Due to the way the backgrounds have been redesigned important platforms tend to blend into the surroundings making the platforming a chore. There were a few shooting segments that were (relatively fast) and a welcome change of pace that are now so slow paced that are long gaps in between enemy attacks.

The hit detection is simply atrocious. If you can figure when and how to destroy the gargoyle statues in in the first level without getting hit you are a better man than I. Watching your attacks completely pass through the bosses is astounding to see in action. The boss battles themselves take on a fighting game tone and were already hard to begin with; the spotty hit detection makes them a nightmare to complete. There are unlimited continues and passwords but considering all of the issues I’ve outlined why would you even be playing this game?

Less sometimes truly is more. Sunsoft worked within the NES technical confines to produce a visually stunning game that had is flaws but was still solid. Ringler Studios completely lost sight of that and have produced a sad update on better hardware that is worse in every way that matters and should be avoided.