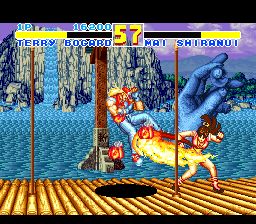 I think we can all agree that some of the first Neo Geo to SNES and Genesis ports were pretty dire. Fatal Fury suffered heavily in the transition from SNK’s beast of a console, to the point where I’m sure many wondered if faithful conversions of some of the biggest arcade games of the time were possible. Then Street Fighter 2 happened and showed that with larger cartridges (ROM not physical carts) you could produce ports that not only looked and sounded the part but felt the same in terms of gameplay. Takara’s second round of 16-bit conversions were far better and worthy of attention starting with Fatal Fury 2.

With Geese Howard dead a new shadowy benefactor has stepped up to sponsor the King of Fighters tournament except this time it has been taken worldwide. No one knows who the organizer of this year’s tournament is but he has been slowly working his way through the participants of the first tournament in search of Geese Howard’s killer……

Fatal Fury 2 takes many cues from Street Fighter 2 whether it was intentional or not. The heroic trio of Terry and Andy Bogard and Joe Higashi are joined by five new fighters from around the globe, bringing the roster to an even eight. In addition the game has four bosses who aren’t selectable without a cheat code. Sound familiar? You can’t blame them for following in Capcom’s footsteps of course and in my opinion moving beyond the confines of Southtown has done wonders for the game’s roster.

While certain characters do fall into the standard fighting game tropes such as Big Bear (your typical strong but slow big man) and Cheng Sinzan (Blanka stand in) the rest of the cast has a feel all their own. Kim Kaphwan and Mai Shiranui both made their videogame debuts here and for anyone who has perused some version of King of Fighters their move sets are fully intact. As the lone female of the cast Mai plays nothing like Chun Li aside from her speed. Kim Kaphwan is my favorite of the new crew. His attacks all focus on kicks which were highly original at the time. Jubei Yamada is a grappling expert who heavily focuses on his various throwing moves.

While I’ve made many comparisons to Street Fighter 2 Fatal Fury has a number of elements that are uniquely its own. The two plane system has returned but seen a number of tweaks to make it a more active part of gameplay. Rather than randomly switching you can manually switch planes by pressing light punch + kick or hitting an opponent with a heavy attack. You can launch an attack while changing lanes as well and it’s hilarious when both combatants knock each other in the midst of a shift. Some battlegrounds have destructible elements or even hazards you can use to your advantage. The running bulls in Laurence Blood’s arena and the gears of Billy Kane’s clocktower are examples. I’ll admit that the dual plane system is not my cup of tea (and only got worse in Fatal Fury 3) but I will give SNK credit for making it an attractive option to use during a match. There are desperation moves that you can unleash when at 25% health or lower but seriously once you see the necessary controller inputs you’ll think someone at SNK lost their god damn mind.

The overall gameplay has been sped up but the game noticeably lags behind Street Fighter 2 Turbo in speed. A dash has been added for quick escapes or to put pressure on players who like to turtle up. For those that unfortunately bought or rented the 16-bit ports of the first game you can rest easy; the special moves are easy to pull off thanks to the improved recognition of your button input. This isn’t the most combo heavy fighting game in the world but now at least you can string together 2 in 1’s and three hit combos at will. The AI is a tough opponent and even on the easiest setting puts up a fight but let’s be honest you buy fighting games for the multiplayer (at least back then).

Comparing the two 16-bit ports reveals some stark differences between the two. The SNES version has a larger color palette but can look a bit washed out on certain stages such Chen Sinzan’s floating barge. The Genesis version seems to be running at a lower resolution than normal which is instantly noticeable. The low resolution means that most of the backgrounds have suffered a loss in detail; Fatal Fury 2 was a beautiful game in the arcade and to see its stunning backdrops reduced to this was sad.

The music also has its share of quirks. The SNES version has better music overall but is missing many of the arcade’s voices. The music in the Genesis version is terrible but it has nearly all of the voice samples although they suffer from the usual Genesis defects in that regard. As bad as the music is in the Sega version it at least doesn’t sound muffled like its Nintendo counterpart. It kind of sucks that the sound of both games lags behind its Neo Geo counterpart; the game has a fantastic OST and I loved to just watch the brief demos if I happened to be in the store that had the arcade cab just to hear the music.

Defects aside both ports are solid conversions of the arcade original and made an otherwise super expensive game available to cash strapped gamers at the time.  Solid game but far from the cream of the crop in terms of fighting games on the SNES.