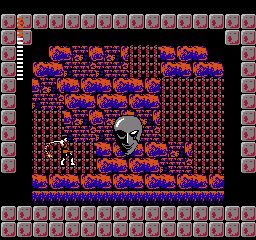 Though it was popularized by Symphony of the Night that wasn’t the first time the Castlevania series had flirted with RPG mechanics.  That distinction belongs to Castlevania II, a game with a very storied history among gamers for a variety of reasons.  It would continue the streak among NES games in which the 2nd game in the series is a radical departure from its predecessor.  While it is enjoyable at times Simon’s Quest buckles under the weight of its flaws.

Castlevania II: Simon’s Quest was released in 1987 for the Famicom disk system in Japan and as a cartridge in America the following year.  There are some differences between the two: the disk version had battery backup while we were saddled with passwords.  On the other hand the music was improved thanks to the increased cartridge size.  The game takes place a number of years after the original game with Simon now suffering from a curse placed on him by Dracula before dying.  After being informed of this Simon sets out to recover the 5 scattered pieces of Dracula to resurrect him in order to undo the curse.  Time is of the essence as he does not have long to live; that element plays out during the course of the game in numerous ways.

This would be the first game to experiment with the now famous “Metroidvania” formula.  Rather than a linear set of stages capped off with a boss fight you are free to explore the entire world as you hunt down Dracula’s parts.  There are numerous towns to visit and people to speak to for varying obtuse clues (more on that later) as you build up an inventory of items you’ll need to progress.   Not every item you find is absolutely necessary for progression but they do have benefits you can exploit.  Experience is gained from the hearts you collect which also double as currency.  Your secondary weapons can be used an infinite number of times now with a few exceptions but have to be found first.

As you travel from point to point your journey will be interrupted as the curse will take effect at night.  During night fall all enemies become stronger and the towns are occupied by monsters.  Any business you had is put on hold until the sun comes up which takes awhile.  There probably is a set period of time that needs to pass for these changes to occur but I’ve never been able to confirm what that is.  Your gameplay time is tracked in game and depending on how long it took to kill Dracula you’ll receive one of 3 endings, the worst of which has Simon dying after the final battle.

Seriously WTF?  Prossess?  You mean to tell me no one noticed that?

This sure as hell isn’t English

All of the pieces are there but the execution is flawed due in large part to the shoddy localization.  I mentioned the “clues” you are given throughout the course of the game but that is being generous.  Calling them clues is being polite.  The translation was completely botched and worse you are often given false information on purpose.  Areas of the game are name dropped but with the exception of the towns are never named in game.  This is confusing as you’ll be told to go to a graveyard to meet someone but its never specified which one.  The information that you absolutely do need for progress is often never given within the game.  As an example: to find the second mansion you need to equip the blue crystal and kneel before the lake for a few seconds, revealing the passageway.  Who the hell would have thought to do that?  If it were not for my next door neighbor’s hint book I would have been screwed when I played this in 1989.  While the curse makes for interesting gameplay moments in reality it’s just infuriating.  There’s nothing worse than rushing to meet a particular person in town only to be cock blocked for 10 minutes when the curse rears its ugly head.

The mansions where Dracula’s body parts reside are where a large chunk of the game takes place.  Here the objective is the same every time: find the merchant selling an oak stake somewhere in the building and then locate the orb it’s encased in.  The stake is necessary to smash it for your prize so it can’t be avoided.  In a clever move if you buy another stake and bring it to another mansion there is usually a path that will take you to the body part right away.

Unfortunately these parts have their own problems on top of the rest of the game.  There are an endless supply of false floors and walls, most of which are necessary to pass through. These are never obvious and as a result see you throwing holy water at every step and wall to uncover them.  This becomes incredibly tedious and honestly is dumb.  Oftentimes you’ll have to make blind leaps of faith at a wall and hope you can walk through it.  It wouldn’t be a problem if it wasn’t mandatory or at least communicated to you in some shape or form.  When you buy a stake, it can be very easy to screw up and use it by accident, forcing you to backtrack to buy another one.  Castlevania was known for its punishing bosses but disappointingly ( or maybe thankfully) there are only 3 in this game.  The game ends with the most anticlimactic Dracula fight ever, which is pitiful considering the amount of trouble you go through to just to reach him.  It is entirely possible to kill Dracula before he ever has a chance to fully spawn and move which is lame.

Yet somehow the game is still fun; I know hard to believe.  Graphically this is a step up from the first game and even though it’s more in the style of Metroid still retains its Castlevania roots.  If ever there were a game that needed a remake Simon’s Quest is a prime candidate.  Play the game with a walk through to save yourself the inevitable headache.  While not as great as it could have been it did lay the groundwork for the direction the series would later take.