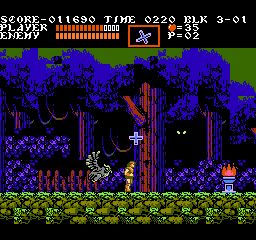 They say the third time is the charm and on the NES that definitely seemed to be the case.  A very weird trend emerged on the system where the second game in each series was a departure from what made the first game popular.  You can see this in Super Mario Brothers 2, Zelda 2, and even Castlevania 2.  Some games benefited from this but while they were appreciated fans still clamored for a return to what made them fall in love with the franchise to begin.  In each case the resulting games were absolutely stellar and Castlevania 3 is among that crowd.

Castlevania 3: Dracula’s Curse was released in 1990.  Ditching the action RPG style of Simon’s Quest it harkens back to the slow paced gameplay of the series roots.  Set in the 1400s this is actually a prequel to the original Castlevania.  Dracula is on the loose with no one to stop him.  Although the people fear them they call upon the Belmont family to help rid them of this menace.   This task falls on Trevor Belmont and with Vampire Killer in hand the journey begins.

Those familiar with the first game can jump right in.  Trevor plays exactly like Simon, hell he even looks just like him.  You still collect various sub weapons and hearts to power them.  The level designs have undergone an overhaul, with many more featuring vertical scrolling sections along with the traditional left to right gameplay.  The years working on the hardware definitely show as the game as a whole is more adventurous in terms of design.  That manifests itself in its non linearity.

At the end of most levels you are presented with a choice of 2 paths.  There are a grand total of 15 stages overall and it’s impossible to play through all of them in a single run, assuring that no two gamers will take the same route all the time.  The choices are more than just cosmetic; the levels vary in difficulty and lead to 1 of the 3 assistant characters you can partner up with.  That’s right, Trevor is not facing Dracula alone although you have that option if you’re stupid.

Grant, Sypha, and Alucard can join you after defeating them with each possessing a different power that can sometimes make the more challenging sections of the game trivial.  Grant can climb on walls and in a weird twist control his jump in midair, something that doesn’t seem mind blowing at first but when taken in context is damn near revolutionary within this series.  Do you know how badly everyone on planet Earth wished all of the Belmont’s controlled like him? Alucard is weak but can change into a bat and completely bypass almost everything provided you have enough hearts.  I’m going to go out on a limb here and say nearly everyone goes for Alucard.  Why waste time lining up your jumps only to have a fucking Medusa head knock you into a pit when you can fly over it?  Yeah, exactly.  Sypha has elemental spells that can also affect the environment to supplement her weak physical attacks.  The spells are powerful but to counterbalance that she takes extra damage when hit and her path also leads to some of the hardest levels in the game.

The series legendary difficulty is here in full swing.  You still move at a leisurely pace and have to stop and line up your jumps properly but now there are far more enemies nipping at your heels, forcing you to take action sooner.  The pace is a bit more frantic; well as frantic as the game can be considering how slow you move.  The bosses are crushingly hard, sometimes forcing you into a gauntlet of 3 in a row with no breaks.  Pray to god you reach them with full health; otherwise you’ll have to be a gaming ninja to beat them.  Tempering this are passwords to record progress. 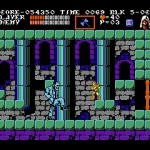 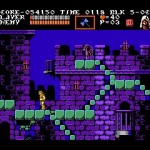 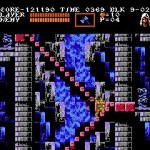 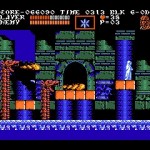 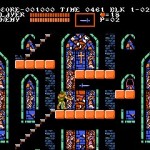 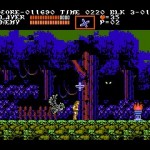 The art style is simply impeccable.

And the production values don’t hurt either.  Without a doubt Castlevania 3 is among the top 10 NES games in terms of graphics and sound, no question.  Konami stretched the NES color limitations to the breaking point with insane detail in the backgrounds.  The bosses as well exhibit the same attention to detail.  The soundtrack likewise is fantastic, with many of the familiar themes from the series remixed for the better.  It should be noted that the US version is slightly gimped compared to the Japanese version.  In Japan the game made use of a custom chip that added two sound channels to the console’s five as well as allowing for smoother animation.   But even despite that this is indicative of the heights developers were able to eventually reach on the platform after so many years.

What more needs to be said?  This is one of the best games for the system and one of the greatest in the series.  It rarely gets much better than this.