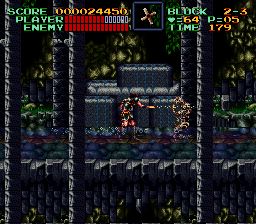 The early years of the SNES life were a pretty magical time.   Many beloved franchises received new installments, usually with the Super moniker to remind you that now you’re playing with power.  Super power.  While the vast majority of those games were good, one game that was truly exceptional and deserving of the Super moniker was Castlevania IV.

Super Castlevania IV was released in 1991, not too long after the console’s launch.  There is some debate as to whether it is a remake of the original game or not.  The only things they have in common are the protagonist and the setting and truth be told it doesn’t matter.  Dracula is back for the umpteenth time and Simon returns to deal with his eternal foe once again.  Comprised of eleven levels, the journey begins as you make your way to Dracula’s castle rather than starting at the castle gates as usual.  If you think about it why the hell would Dracula wait until the Belmont clan was knocking on his door to try and take them out?

The multiple paths and optional characters of the third installment do not make a return for this game unfortunately.  Although a slight regression what you do get instead is a much more nimble protagonist.  It seems Konami took the criticism of the series to heart as Simon is just as athletic as the best platform stars.  You have free movement when you jump and can even jump on stairs; two additions fans prayed would be added for years.  Simon moves a lot faster in general thankfully, erasing all memories of the rigid pacing of the original 3 games.  The whip is far more versatile, allowing you to swing in 8 directions, use it as a grappling hook, and even as a shield.  In truth the whip mechanics weren’t necessary and can even be game breaking as you’ll kill enemies above or below long before meeting them face to face.  That’s not to say the game is devoid of challenge as the levels will definitely test your skills toward the end.

The stages run the gamut from forests to misty caves to the various floors of Dracula’s castle.  While some levels are reminiscent of prior installments there are a wide assortment of new enemies and contraptions to contend with.  Stages such as level 4’s rotating room or the constant swinging of level 9 are fine exhibits of the new whip mechanics.  Although the multiple paths are sorely missed by focusing on a linear adventure the levels are much stronger for it.  Though Castlevania IV starts off easy by the end it definitely starts to veer in the direction of prior installments in terms of challenge. I distinctly remember spending the better portion of a few days working on the last few levels; for those of you seeking a challenge its there.

Every graphical trick in the book is exploited with nearly every level featuring some manner of graphical spectacle.  Beyond the quality of the art judicious use of Mode 7 is sprinkled throughout the game.  The fourth stage alone serves as a carnival of tricks the SNES can produce from the rotating room to the shrinking boss himself.  It is a bit gratuitous at times but can you blame them?  It was new hardware, everyone showed off.  Large sprites, monstrous bosses and a cornucopia of special effects combine to create a visual feast for the eyes.  Despite being an early entrant in the system’s library it still holds up admirably today.

The Castlevania series is well known for having some of the finest soundtracks in the industry and this sits near the top.  Going beyond their work on the NES the soundtrack featured a rich amount of ambiance when called for but can switch to a symphonic arrangement at the drop of a dime.  The breadth of instruments used also increased with organs, drums, pianos, and flutes all making an appearance. There are a fair amount of remixes of popular tracks from previous games, most notably Bloody Tears and Vampire Killer.  I distinctly remember my first time seeing the game on the Gamepro TV show (remember that?).  Beyond just the graphics the music floored me, and even the sound effects were excellent.  I would easily place this in the top 5 best Castlevania soundtracks of all time.

Remake or not, this is one of the finest action games ever made and one of the best games in the traditional Castlevania mold.  The fact that it was released early in the console’s life and still bests later games released in 1996 or 1997 is a testament to its gameplay.  Games this good do not come along very often. Don’t miss this.