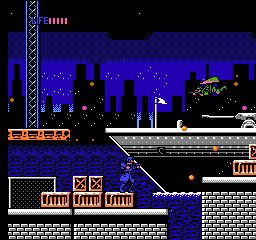 Looking back it is surprising that there weren’t more games released in the style of Contra for the NES. There is no question that Contra is one of the most popular games for the system and while there were plenty of character action games such as Mega Man and Shatterhand most run and gun action titles were of the top down variety. In Japan there were a number of action games just as good as Contra and Journey to Silius that never left the country. Cross Fire is one such game whose worldwide release was cancelled at the last second. Once you get past the undoubtedly bad first impression the game leaves this is a solid action romp.

I imagine the game gets its name from the fact that you have to deal with enemies in the foreground and the background at the same time. It’s cheesy but the name fits. There is rarely a moment where you aren’t dealing with enemies who want to fill you with lead or stab you and some form of attack from the background, be it a turret, grenades, or even random lasers from seemingly nowhere. It isn’t the most original feature but it certainly makes the game far more intense and distinct from similar titles. Dealing with these dual threats is a bit of an issue however, at least initially.

Cross Fire unfortunately starts off on a bad note that will leave a negative impression on everyone who boots it up. You are dropped in with nothing but your bare fists and grenades to deal with turrets, tanks, and armed soldiers and it flat out does not work. Closing the gap to punch someone in the face means you’ll almost always take a hit or two. Aiming at background enemies with the grenades is frustrating since they move in an arc and you need to be precise to register a hit. Once you find the machine gun (or die at which point it is given to you) thankfully it becomes the game it should have always been at that point.

I call it a run and gun when in actuality you’ll slowly work your way towards the exit if you are smart. There is simply too much going on at times to try and blitz your way through. Your weapon selection is light with only a three way shot and spread like missiles as upgrades. Luckily they are all you need as they work extremely well. The three way shot leaves wide gaps between its bullets but is perfect for hitting targets behind cover. The missiles are a little slow but you can send out a large batch in a few quick shots to make up for it.

This is a worldwide journey as you are dropped off at hotspots all around the world such as Afghanistan, Vietnam, and Vladivo (more than likely Vladivostok). There’s a decent amount of variety from one level to the next as you move from the jungle to a shipyard in Russia and even a moving train. While the game has its feet firmly planted in reality it does make one very strange detour in Afghanistan. Here you’ll face bullet shooting Buddhist statues among the halls of a mosque and the end level boss is a floating god like deity. Not that it isn’t cool but it comes out of left field with no explanation. At least in Contra you know it is an alien invasion so when you see the dick monster in stage eight there is some context.

Despite the strength of your weapons this is a pretty daunting game. Bullets are flying everywhere at all times it seems and you can’t even linger in one spot too long without barrels falling on top of you, as if to force you to move on. Your life bar will drop pretty fast, regrettably due to bullets that blend into the backgrounds. The boss battles present an imposing challenge if you are not appropriately equipped. Oddly enough most of these encounters take place in the middle of the levels, making that last sprint to the level’s end pretty harrowing. I found this a lot more difficult than beating Contra with the 30 man code honestly but it isn’t impossible as long as you take your time.

In a day and age where we expect instant gratification Cross Fire, with its stupid hand to hand combat will turn many off. However if you stick with it you’ll see the good game underneath. This is a solid action game that would have fit in with the rest of the NES library worldwide. The game is entirely in English anyway so its lack of a US release doesn’t matter. Cross Fire can be found for under five bucks, at that price I say go for it.