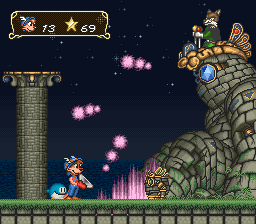 If you were a third party during the 16-bit era it was a prerequisite that you needed some kind of furry mascot to be taken seriously. It’s a silly concept in retrospect but back then a smarmy farm animal in a t-shirt could help your business thrive. Some resisted like Sunsoft but even they eventually gave in and created Aero the Acrobat. One of the last companies I would have expected to jump on that trend was Ascii, the one-time maker of numerous third party controllers and peripherals turned video game publisher. Their entrant in the mascot wars is as obscure as they come but deserves better. Ardy Lightfoot does not break new ground but is still far better than many of its contemporaries.

Ardy Lightfoot is an explorer of ruins and together with his friend Pec they seek treasure and help people in need. One day he uncovers a stone table that tells of seven colored jewels that when found will grant one wish. That sounds really familiar……! Anyway the evil Visconti and his horde have also learned of these jewels and the race is on to see who will have their wish granted.

The plot in a platformer is almost always superfluous but in this case the developers tried to make the game a little more story driven and failed spectacularly. The game has no dialogue and so you are left to infer what is happening based on the character’s gestures and such. Plenty of games have done it but here you are left confused as to what the hell just happened. Why does Gilson the pirate owl decide to help you? The game doesn’t say. It’s also funny to see the game flashback to something that just happened 10 seconds ago. But that’s neither here nor there.

Story aside the game has a simple set of mechanics at its base. Pec can devour nearly any enemy you come across and also functions as a one hit shield. If you take a hit Pec disappears leaving you vulnerable. Ardy’s only means of offense is a tail that is basically the standard platforming butt bounce. It also doubles as a spring but its use can be imprecise at times. This is where the game’s main source of frustration comes from; it’s manageable but annoying enough that it is worth mentioning. Two special items allow Pec to munch on concrete walls and inflate like a balloon for Ardy to ride on.

The game’s level design seems to draw heavy inspiration from a number of sources. You’ve got inclines and hills to build speed like Sonic, simple block pushing puzzles like Monster World IV, and the kinds of precision platform hopping most platformers are known for. While it comes across as generic there are times when the game shows genuine inspiration. There’s a level late in the game where you must watch both the top and bottom of a mirrored surface in order to dodge electrified lances; it’s very creative. Most of the boss battles have some unique element that make them incredibly fun rather than the same repetitive fights so typical of the genre. When the game tries to do something interesting with its mechanics it is incredibly fun. However these rare moments are spread out over the course of this lengthy adventure rather than being a matter of course.

Behind the game’s cute façade lies a game with some teeth behind it. It is not an exaggeration to say this is one of the more difficult platformers of that era although it does not give that impression at first glance. Ardy has a steep difficulty curve and can be pretty punishing. You can only suffer two hits before death and whenever you are without Pec you are walking on egg shells, terrified of any enemy big or small. Although the temptation to try and run through the levels is present that will only result in a swift death. There is no time limit anyway so it will behoove you to take your time. Boss battles are especially difficult as there is little margin for error but also rewarding. The game isn’t impossible as extra lives are doled out regularly and there are passwords to chart progress. I just don’t think most will be expecting the monster that lies under the bright graphics.

Speaking of the graphics Ardy Lightfoot looks great. The game’s seventeen levels cover a lot of ground as you’ll visit most of the platforming staples such as a forest, an underground mine (completely with an auto scrolling mine cart segment), and even a pirate ship. However they all still manage to look unique to an extent thanks to the game’s big and bright style. There’s a decent amount of scrolling in its backdrops and most sprites are pretty large and well animated. Although it doesn’t compare to most of the other platformers released in 1994 in terms of presentation overall the game is solid.

Solid best describes Ardy Lightfoot. By 1994 there were a glut of platformers for almost every console with many of them being generic. Ardy Lightfoot does not deserve to be lumped in that category and is simply a good game that will provide hours of entertainment to fans of the genre.