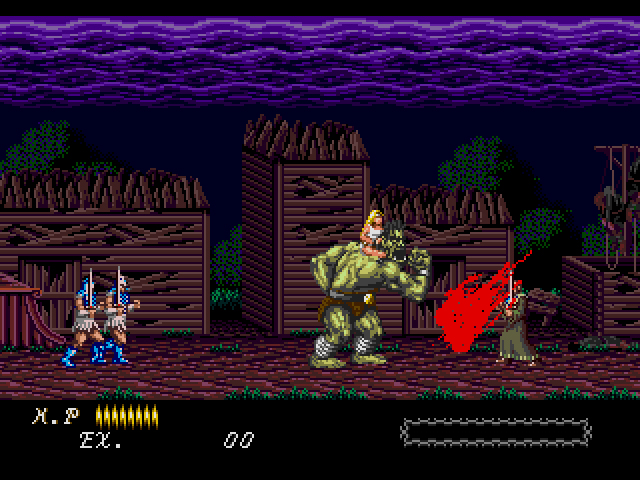 One thing I absolutely love about the Sega Genesis library is the fact that the vast majority of worthwhile games released in Japan were brought overseas. Thanks to Sega of America’s aggressive support of the system future classics like Gunstar Heroes, Landstalker, and Beyond Oasis all found homes in a smart gamer’s system. It does however make you wonder about the games that were left behind. While games like Alien Soldier and Battlemania were released late there were others like Dahna: Megami Tanjō that were curiously left stranded. After playing I can see why. There’s good gameplay buried underneath a bunch of flaws that unfortunately ruin the game.

From its protagonist to its use of magic Dahna reminds me of Golden Axe. Dahna could very easily have been Tyris Flare as she is quick with a sword and can also use magic. There are only 3 spells and depending on how much MP you have a different spell is used. Unlike Golden Axe however the strongest magic doesn’t use up all of your MP. There aren’t any enemy steeds to commandeer but at various points in the game you’ll ride a horse, a dragon or even the back of an ogre. That last one sounds pretty cool but the slow bastard will die in short order.

For all of its similarities to Golden Axe though you’ll immediately notice the janky controls. Your sword slashes come out pretty rapidly but anytime you switch from performing one action to another there is an annoying delay. Turning around to swipe quick footed enemies isn’t as easy as it should be which leads to many cheap hits. Even ducking down has to be done and getting up has to be done in a three step process. This isn’t a fast paced game but the enemies do move pretty fast and in groups so the chances of dealing with them without taking a hit is slim. The platforming has its share of frustrations as the high jump doesn’t always execute on command. Considering you’ll spend a good portion of your time doing just that it sucks that you can’t even rely on the controls to get that part right.

Of the game’s many faults though the most egregious is the insane difficulty. You have one life and five continues to complete this short quest and I’ll tell you right now it isn’t enough. Bottomless pits are everywhere and the stiff controls mean you’ll fall into them more than once. Life restoring items are incredibly rare and are dropped in such paltry amounts it is insulting. And to further insult you they don’t even refill your life bar after every level! Every 100,000 experience points will refill your health but that only applies the first few times. What more could they possibly do to screw you over?

The sad point of all this is that with a few simple tweaks this could have been a decent game. It sure as hell wouldn’t make any best of lists but for those who really liked Golden Axe (like me) it could have been a worthwhile alternative. There’s a decent amount of variety to the game such as the times you ride on the back of a dragon or horseback but at every turn the shoddy execution undermines that. It’s these titles that frustrate me the most. The ones that have good ideas or even just a setting you like and are on the precipice of being good but needed a little more play testing to iron out the kinks.

From a visual standpoint the game definitely has the look of an early Genesis title. The color palette is very dark which fits the tone of the game but does nothing for the game’s visual variety. The sprites are about medium sized but are blurred and sometimes lack detail. This is an incredibly bloody game for the period with enemies leaking blood when cut. One boss in particular losses his extra arms as the fight progresses and returns later in the game sans limbs with blood gushing where they should be. Occasionally there is a pretty background but it can’t make up for the rest of the lackluster presentation or weak music.

I really wanted to like Dahna but the insane difficulty completely ruins the game. I like a good challenge as much as the next man but not when it is done so cheaply. I guess you can see why no one bothered to release it worldwide, which is notable because the Genesis wasn’t exactly overflowing with software in 1991. The game is cheap for a reason and even with that in mind I can’t recommend it.