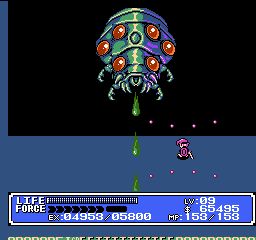 Looking back, for all of the Legend of Zelda’s popularity in the US there were not as many action RPGs available that were worth a damn to follow in its footsteps.  At least in America.  The Hydlides and Deadly Towers of the world far outnumbered quality games like Willow and the Magic of Scheherezade.  Before SNK caught fighting game fever they crafted a number of original titles for the NES such as the Baseball Stars series and Iron Tank.  The last thing anyone would expect to see in their gameography is an RPG but Crystalis showed how versatile they truly were.  In many ways similar to Zelda Crystalis manages to surpass it in a few categories to become one of the best NES titles of all time.

In the year 1997 (considering this was released in 1990 the developers sure were cynical about the future) Earth has been ravaged by war, causing the planet’s axis to shift and cause mutations in the populace.  After mutants have run amok across the world for years the survivors create a tower to watch over the world with enough power to protect or destroy it to prevent future chaos.  100 years later a hero awakens from cryogenic sleep to find the world teetering in the balance and must save it.

Crystalis is a game that benefitted from years of game design refinement.  By 1990 developers had made their mistakes and discovered what did and did not work for each genre and pumped out quality titles left and right with hindsight in mind.  The adventure isn’t as free form as Zelda but moves at a faster pace, is less obtuse in its clues for progress, and in many ways is the game Zelda II should have been.

For an NES title the game’s story is fleshed out pretty well.  During the course of the journey you will meet a large stable of recurring characters such as the four sages who teach you magic, the hero Stom, and another hero who was frozen like you were.  The motivations of the people fighting against the Draygon Empire are examined and there’s even a little bit of backstory regarding the protagonist thrown in.  Throughout the game’s ten or eleven towns you will meet many NPCs that you will have to revisit from time to time.  There are even a few touching moments regarding deaths in the game which wasn’t all too common back then.  It’s nice to play a game where the townspeople serve as more than just a means to get from point A to B, especially in an 8-bit title.

The game shares the same top down view as Zelda but veers off from there.  There are a full complement of items and armor to buy and you gain levels by earning experience.  The controls are kept simple one button for attack and the other for item use.  Like A Link to the Past you can move diagonally which is a god send for games of this type.  Certain items such as the rabbit boots will allow you to jump which is necessary at set points within the game although you can set aside your fears of any forced platforming.

The prime thrust of combat revolves around the five element swords you will eventually gain by the end of the game.  Each sword comes equipped with a charged attack that produces different attacks but at the cost of movement; you must stand still to charge.  These can be further upgraded by finding the corresponding orb and bracelet to produce devastating effects.  Obtaining a new sword never makes the old ones obsolete as there are many enemies that are immune to certain elements and weak against others.  Level 3 attacks use up MP, which needs to be used sparingly as magic plays a heavy role in the game.

Magic is learned at set points in the game, with each spell seeing heavy use.  The most important would be telepathy, not healing.  With telepathy the sages will guide you toward your next objective and provide clues if you are lost.  What I would have given to have that in both Zelda 1 or 2.  Some help to solve the puzzles in the game such as shape shifting and the requisite healing spells.  The change spell by itself is interesting to see how people react to you and what new information you can glean.  Even an otherwise useless spell such as paralysis has its story based uses.

This is a far more combat oriented game than in Zelda and truth be told the “puzzles” if you want to call them that rarely stray further than having the necessary item or using the appropriate spell at the right time.  The level 2 charge ability of each sword has secondary functions such as the sword of water’s ability to freeze lakes to create a bridge or the sword of thunder destroying iron walls.  The game is linear until its latter stages at which point there are optional areas to visit to find important power-ups.  The dungeons and caves continually increase in size, to the point a complete idiot such as myself can wander around the same four hallways for 30 minutes before noticing something’s wrong.

My only criticism are things boil down to the game’s interface and balancing.  Late in the game you will frequently run into groups of enemies that require specific swords to beat and the constant weapon switching becomes annoying in short order.  Granted the NES has limited buttons but design wise it could have been avoided.  The game gates its content by level; if you aren’t at a specific level at each point you won’t be able to damage the enemies, let alone bosses.  It’s great as it means you won’t face challenges you are unprepared for but it also means you have to grind at regular intervals to meet the minimum requirements of each specific area.  Crystalis can be challenging at times and it is unfortunate that they didn’t’ avoid the grinding pitfall of so many 9-bit RPGs.

In the end however they do little to keep Crystalis from excellence.  This is one of the best eight bit games of all time in spite of its low profile and one that I give one of my highest recommendations.  I would stay away from the Gameboy Color remake as it changes enough of the content to feel like a different game.