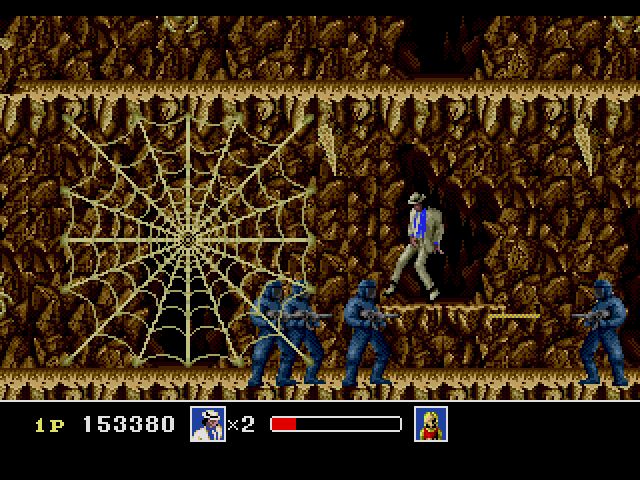 Of all the major stars Sega signed licensing deals with in the early 90s to support the Genesis Michael Jackson was undoubtedly the biggest name possible.  This was MJ near his absolute peak in popularity; Bad was stilling enjoying success years after its release and Moonwalker had hit theaters and enjoyed success, although honestly I don’t know why.  Signing him to star in a game is one thing but how do you go about creating a game based around Michael Jackson?  Though it bears the name of the movie it’s not as if the film had an actual narrative that lent itself to awesome gameplay. Yet somehow Sega did it and while the game certainly isn’t a classic it is still enjoyable yet bizarre.

Mr. Big (who was played by Joe Pesci, ironic I guess) has kidnapped children and hidden them all around the city, leaving Michael Jackson to find them and try to catch him in the end.  Curiously all the children are girls who resemble Katie from the movie; I’m sure certain legal troubles had something to do with that but I digress.

If Michael were alive today and the game made now I’m sure it would be a generic rhythm game.  But Sega had no such luck and would have to go along a different tact.  Sega’s solution was to take the basic framework from the “movie” and a pinch of Shinobi to the proceedings.  Seriously this is Shinobi with a dancing Michael Jackson instead of a bad ass ninja.  It’s a bit shameless to copy your own work but hell why not?  This was the equivalent of a killer app and I’m sure they wanted to get something out on store shelves as soon as possible.

Decked out in his smooth criminal garb the thought of Michael Jackson flashing a gun is so silly that I can’t imagine it.  Rather than flashy weapons you’ll take on the bad guys using what MJ is best known for; his dance moves.  Your primary offense is a kick or punch that gives off a little fairy dust as long as your life bar is 80% full.  The dance button performs a number of functions; when tapped lightly you’ll spin which can take out enemies.  Hold it down longer and you’ll spin and throw your fedora like a boomerang.  Keep it held even further and you’ll perform an ensemble dance number with all on screen enemies joining in and dying at its climax.  Using these moves takes up life but all it takes is rescuing one child to nearly refill it.

While some of the children are in plain sight most are hidden in some pretty fucked locations.  The children can be almost anywhere, behind doors, windows, in the trunks of cars (!) and even behind gravestones.  The levels are relatively compact in the early going but start to become larger in scope as you progress making it harder and harder to find the children.  The empty doors of the initial stages give way to bombs and other such oddities that will take away health, this time like Revenge of Shinobi.

Comparisons to Shinobi aside you have to admit Moonwalker is a strange game when you step back and look at its constituent parts.  Dancing around and flinging fairy dust at gangsters, zombies (yes zombies) and spiders is as silly as it gets.  There’s only one power-up, a shooting star that will appear under set conditions and will transform you into mecha Michael Jackson, able to fly around and shoot lasers.  Granted it’s useless since you can’t save kids in that form and the enemies will respawn anyway but you can at least get a feel for the levels.  Once you’ve found all the kids Bubbles will sit on your shoulder and guide you to the exit of the level where you’ll face an onslaught of thugs before continuing onward.  And in the final level you turn into a spaceship at which point the game becomes a shooter. Yes, seriously.

As solid as the controls are the game cannot overcome its repetition.  The enemy AI is beyond dumb with soldiers who have you dead to rights instead simply staring.  Because the AI lacks intelligence each level is filled with tons of them and it becomes tiring to fight the same bad guys repeatedly and it only becomes worse by the midpoint.  Even the music, and I love Michael Jackson’s hits, repeats on an endless loop.

Speaking of the music, it’s pretty fantastic.  Each level, which is split into three parts, features one song off the Bad album and the Genesis does a pretty good job replicating each song minus the lyrics.  It’s a pretty nice audio treat for fans of the movie and album.  The backgrounds might not be all that great but the animation is spectacular, replicating Michael’s dance moves to the letter.  Unlike Atari with ET Sega spare no expense when it came to the game’s production values.

Weirdness aside Moonwalker turned out better than it probably should have given the game’s source of inspiration.  It’s still not a title that I would recommend over the platform’s best but you could certainly do worse.