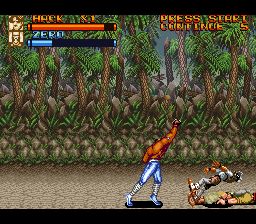 1993 proved to be a huge year for the side scrolling beat em up as the genre seemed to flourish both in the arcade and on home consoles. SNK’s Sengoku 2, Konami’s lesser known Gaiaopolis, and more importantly Capcom’s the Punisher and Dungeons & Dragons: Tower of Doom were either kick ass games or brought some much needed innovation to the genre.  On the home front Final Fight saw an exclusive SNES sequel and Sega’s Streets of Rage 2 would be the top game in the eyes of fighting pugilists for quite some time.  Jaleco’s Rival Turf was an average game and so the sequel seeks to rectify that and is a marked improvement but comes up short in a few categories.

Hack and Slash, the titular Brawl Brothers in the title run a local self-defense gym in Bayside City with their three best pupils, Kazan, Wendy and Lord J.  It’s a bit silly that a ninja, wrestler, and Karate master are taking classes to learn how to protect themselves but whatever.  The mad scientist Dieter has unleashed his army of clones on Bayside City and captured three of the group, prompting the remaining duo to spring into action.

Jaleco’s three beat em ups (Rival Turf, Brawl Brothers and the Peacekeepers) are all part of one series of games known as Rushing Beat in Japan.  The games were all localized but aside from the two main protagonists all references and story beats that connect the games have been removed.  There’s no silly American names like Jack Flak and Oozie Nelson this time out at the very least although Hack and Slash is just as hammy.

You are able to choose two of the five characters at the start with the remaining three being captured per the game’s story.  These characters serve as the end level bosses, adding a random element to the game since it changes depending on how you’ve chosen.  It is a bit unfair that as bosses they sport techniques that you do not have access to but I have to admit it makes the battle against them more exciting.

From a gameplay perspective Brawl Brothers is significantly improved over its predecessor.  While all five characters have the same basic array of punches, kicks, and throws there are techniques unique to all of them that make a large difference aside from their differences in strength and speed.  Kazan can triple jump and has a slide kick, Hack has a power uppercut akin to Axel’s Grand Upper, and Lord J has a larger arsenal of throws compared to everyone else.  Angry mode makes its return and is probably even more overpowered than before.  With the increased abundance of food it’s possible to activate it multiple times without dying if so inclined. In an odd twist it’s preferable to avoid all weapons aside from the shotgun as their reach and hit box is too finicky to deal with.

There are only four stages in the game however each is extremely long and comprised of multiple locations separate from one another.  The first level begins on a highway overpass before descending down into the sewers.  Stage 2 starts off in the jungle before leading to a mobile lift you can conveniently toss enemies off of.  The American version saw a few changes regarding the levels to make the game less linear.  The sewer has been changed to a maze of corridors that you have to navigate through to find the exit.  The abandoned gym leads to an elevator that will take you to a number of floors with items or enemies lying in wait before the finale.

There’s a diverse amount of scenery considering the brevity of the game including the boss battles.  Each boss has their own unique arena (sometimes literally) and some like Kazan’s have external factors to deal with such as the room rotating as you fight.  Once you’ve beaten one of the bosses they become playable on the following levels.

Because there are only four levels and they are so long the repetition in the game becomes far more noticeable.  There’s very little enemy variety in the game and in fact by the end of the first stage you’ll have fought all of them aside from one new addition half way through the game.  Fighting the same three of four generic bad guys in groups of 4-5 continuously on every 15-20 minute stage gets tiring quickly.  I get the feeling even the designers realize this as there are multiple segments where you can toss them off screen for an instant kill.

Aside from fighting the same bastards over and over there are some quirks you’ll have to adjust to with the fighting system in place.  I don’t know if it’s a collision issue but there were far too many instances where I should have grabbed an enemy but instead walked through them repeatedly.  Trying to grab them from behind does not always work.  If you are knocked down its possible to become trapped as some enemies will repeatedly knock you over before getting up, resulting in a cheap death.  Some enemies (Butch and his variants in particular) seem to be able to grab and throw you at will which is frustrating to deal with in the second half of the game. As cheap as some of the enemies are they’re also extremely dumb and will often jump off a building or into a hole of their own volition which is hilarious to see in action.

Despite the game’s repetition and cheap tactics I doubt anyone will have trouble finishing the game, especially since you can always press start on controller two once you’ve exhausted all of your continues.  Brawl Brothers is an improvement over Rival Turf and had the potential to be more and falters in its execution.  It’s still a solid sequel but could have been an excellent game with more polish.