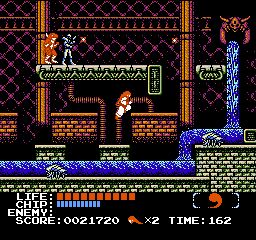 This right here is one of the strangest games in the NES library.  You’re probably looking at the box art and wondering what does a Kabuki actor have to do with demons and computers.  The answer? Absolutely nothing.  Ignore that aspect of the game however and what is left is one of the strongest platformers in the console’s collection, one that is relatively unknown due to everyone going “WTF” at the name.

In the distant future a rogue computer virus has installed itself into the main defensive system of planet Earth.  With no other alternatives Colonel Scott O’Connor agrees to use an experimental device to convert himself into data and possibly shut down the virus from the inside.  So why is he a Kabuki actor?  Well his ancestors were so the computer makes him one as well.  Pretty anticlimactic eh?  Although it bears a strong resemblance to certain other games there is enough unique territory explored to set it apart from its contemporaries plus the game is so well executed you won’t care.

If you’ve played Sunsoft’s Batman you’re on familiar ground.  As a Kabuki your primary attack is your hair.  With about medium range you’ll have to get up close and personal in most cases.  After every level you’ll receive a new secondary weapon governed by chips.  The more powerful the weapon the more chips required.  Generally you can save these for the tough as nails bosses because the levels themselves aren’t too cluttered with enemies.  The majority focus is on the platforming, which is done exceedingly well.

Taking full advantage of your ability to hang and swing from ledges the levels are built to put your skill at this to the test.  Easy in the beginning where it isn’t mandatory you can practice to an extent and learn how to time your swings correctly.  The level design is truly excellent and has a perfect difficulty curve.  By the middle of the game there are fewer enemies, shifting the focus to the platforming.  At Round 3 onwards you’ll need to have some semblance of skill because it becomes a no holds barred free for all with enemy placement factoring in as well.  It’s all done very well thankfully and when you get into a rhythm of sorts you’ll fly through even the toughest segments like a ninja.

Speaking of ninjas, the graphics are a cross between Batman and Ninja Gaiden.  The computer virus has mutated everything in its wake, explaining the presence of demons and other bio hazards.  The demons and background elements are a strong match for Tecmo’s classic while the color design is taken straight from Sunsoft.  Its derivative, no doubt, but very well done.  The animation as well is excellent with the bosses as well as Scott exhibiting a range of character.  The music unfortunately limps along in the background.  It isn’t terrible but I certainly don’t remember any of the tracks.

It might be derivative but what’s there is polished and enjoyable.  After you’re done with the Ninja Gaidens, Castlevanias, and Megamans pay a visit to Kabuki Quantum Fighter, you won’t regret it.  Personally I’d have left out the Kabuki in the title, seriously did the average kid even know what the hell Kabuki is?