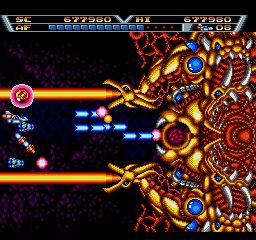 Shmups were a dime a dozen during the 16-bit era, with every console getting their fare share.  God, there were so many you could almost use them as currency (1 Lightening Force=$50. 1 Divine Sealing=-$20, yeah shame on you if you bought it).  With as many choices within the genre a game would have to do its best to stand out from the pack lest they be swallowed by the sharks of the genre.  Some excelled, like Axelay, but then you have mediocre games like Arrow Flash.

Arrow Flash was developed by Sega of Japan and released in the US by Renovation.  You control Zana Keene as she pilots the transformable mech left by her grandfather against the alien forces attacking mankind.  Primarily a horizontal shooter, Arrow Flash’s lone distinction was an early Genesis title and it shows.  While some titles from those early years still hold up today, this isn’t one of them.   This is as bog standard as you can get, with very little excitement found during the course of the game.

Arrow Flash’s lone claim to fame is its transformable ship.  In jet mode you are smaller, can easily avoid enemy bullets, plus you’re weapons are fired in a straight line for concentrated power.  In mecha mode you are a bigger target, however you’re weapons fire diagonally and behind you, with the options (well that’s what I call them) following suit.  This also affects the Arrow Flash attack that is the inspiration for the game’s title.  You can choose either Stock or Charge, both of which are self explanatory and are tailored to different play styles.  There is a robust selection of weapons to choose from and its fun to switch forms to see how they are affected.  Your attack options overall are pretty robust, but in the grand scheme largely irrelevant.

The game does not create any situations in which you’ll ever need to take advantage of any of these attack options because it is far too easy.  You can fully power up in short order and at that point the game becomes a cake walk.  Regardless of the ship’s mode your attack range will cover over ¾ of the screen, destroying most enemies before you even see them.   The action never becomes hectic at any point, with large stretches of empty space or just 1 to 2 enemies attacking at a time.  Lame.

Even the bosses fall to your superior firepower quickly and the game is generous enough to let you respawn exactly where you die.  You know, now that I think about it, this does borrow pretty heavily from Thunderforce 3, however it lacks even a fraction of that classic’s intensity, from the lackluster graphics to the challenge.

I suppose in 1990 there wasn’t exactly a surplus of quality games for the Genesis; I should know I lived through it.  But even taking that into account Arrow Flash is not worth anyone’s time.   There are legions of far better shmups available that you can sink your teeth into unless you’re weak sauce and need an ego boost.  But that would be desperate and pathetic.  And you’re not either of those are you?