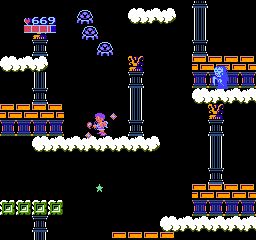 Among the opening salvo of first party Nintendo games Kid Icarus has always been the red headed stepchild of the bunch (literally).  I’ve never been able to figure out why it never achieved the same level of popularity that classics such as Metroid or the Legend of Zelda did.  This is a shame because even though it has its issues it is still among the best games released early on in the system’s life.

Pit is on a quest to find the 3 sacred treasures necessary to save Angel Land from Medusa and free its Goddess, Palutena.  Released in 1987 Kid Icarus was part of the second wave of NES games from Nintendo that were far more advanced in scope than earlier fare such as Ice Climbers and Mach Rider.  Its ambitious nature is cause for frustration at points but at its heart Kid Icarus is an excellent action platformer that is finally getting another sequel after 20 years.

As Pit you travel through 13 levels broken up into 3 worlds: the Underworld, Surface World, and Sky World.  The bow and arrow are your primary means of attack as you collect various weapons and items along the way.  The gameplay varies from horizontal to vertical platforming, each with its own set of challenges.  The vertical segments provide numerous obstacles, such as platforming straight out of Super Mario Brothers and enemies that need to be dealt with in certain ways, such as Death.   The horizontal levels are more straightforward, with less focus on the jumps and more enemy heavy.  The 4th level of every world is a massive fortress maze that culminates in a boss fight.  In many ways it draws from several different genres such as RPGS and strangely shmups and has surface similarities to other games.

The role playing elements come in the form of using the hearts collected to buy items and the points received to boost strength and health.   There are numerous paths to becoming stronger; the trial rooms challenge you to endurance tests that will award you with new weapons or the God rooms, where all of your actions are tallied and your attack power increased.  The hammers collected can be used to free stone soldiers to aid you during the boss battles as well.  The fortresses are a side scrolling version of a Zelda dungeon, with massive maps and items to collect.  The final level which finally allows you to use the treasures you’ve collected is a departure from everything else: scrolling shooter.  It’s a very strange concoction of elements that somehow works when put together.

You will dread every encounter with the Eggplant Wizards, trust me.

But it isn’t perfect.  Far from it in fact.  The main offenders are the slippery controls and ball busting difficulty.  The first thing you need to accept is that Kid Icarus hates you.  From the very beginning the odds are stacked against you.  You are extremely weak, have a puny life bar and have to make precision jumps on the first level.  Speaking of which that first level truly isn’t representative of the rest of the game and I feel is a far too hard, giving a bad impression right off the bat.  To a certain extent it becomes easier as you progress but the challenge then comes from other sources.  It becomes mandatory to kill enemies in large numbers because you need the hearts and the points to “level up” so to speak.  Items are far too expensive and if you don’t increase in strength the latter portions of the game are near impossible.  And even worse there’s even an asshole who steals your hard earned items, forcing you to buy them back at exorbitant prices.  The fortresses are brutal, you need to spend money to buy the items just to see what room you are currently in and have been to.  Imagine if Zelda was like that?  Christ.  It’s admirable that they even attempted to combine so many of these elements but there is a distinct lack of polish overall.

Sad but this is probably what most people who remember Kid Icarus from back in the day think of.

Yes, Captain N was a bit cheesy but I don’t care I still love it!

In the end these problems do drag Kid Icarus down a notch.  I guess you can say that is the main reason it isn’t held in high esteem.  And you know, his appearance in Captain N probably didn’t help either.  But they don’t diminish the experience as a whole once you stick with it.  Now is the perfect time to experience Pit’s first adventure in preparation for his upcoming 3DS outing.