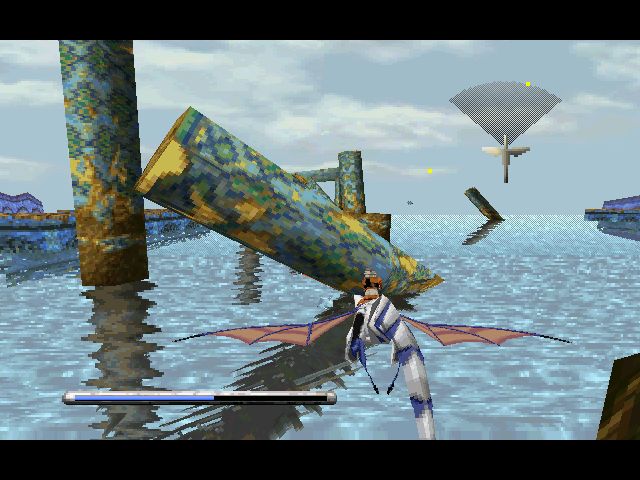 Of the Saturn’s early lineup one game garnered more attention than everything else; no not Virtua Fighter, I’m talking about Panzer Dragoon.  With its distinctive art style and world it dazzled gamers on both sides of the Pacific.  Luckily it also had the gameplay to back up its pretty graphics and was one of the system’s few bright stars in the console’s early life.

Set many years in the future after an unnamed war has ravaged the planet, Panzer Dragoon tells the tale of an unnamed youth who through circumstance becomes the rider of a blue dragon. This dragon and its previous rider were on a quest to stop the ruling Imperial government from accessing a Black Tower and unleashing a power that could destroy the world.  The world and back story of Panzer Dragoon is incredibly detailed, unnaturally so for a shooter.  But that attention to detail pays off since you’ll become immersed in the lore which provides impetus and context for your actions.

Released in America in 1995 Panzer Dragoon was the strongest title available at the Saturn’s surprise launch and as such gave gamers a reason to consider taking the plunge in spite of the system’s high price due to its gameplay and graphics.  If anyone seriously considered buying a 32X to experience what 32-bit hardware was capable of I’m sure they changed their mind once they caught a glimpse of Panzer Dragoon.  The game was that good.

A rail shooter like Star Fox except on steroids, the forced scrolling allows you to focus on the many enemies that want you dead.  Although you have no control of your forward movement you can move freely within your viewing area as well as switch the camera to look to the left, right and behind you.  The bio mechanical creatures come from all sides and taking quick action to see where the hits are coming from will save your life.  To prevent death from cheap hits your radar will show which direction the enemies are coming from.  The boss battles really ratchet the intensity with mechanical behemoths that will bombard you from all sides and attempt to catch you unaware by switching sides.

Your primary form of attack is your blaster but you can also use the targeting reticule to mark up to 8 enemies to kill with the dragon’s homing lasers.  There are no power-ups, just the careful balance of power between your two weapons.  Firing shots individually is extremely effective since you can shoot rapidly.  Manual targeting is reserved for groups of weaker enemies or hitting specific weak spots effectively.  There are very few enemies that stay stationery for long periods of time so alternating between the two is mandatory for survival.

It’s a testament to Sega’s designers that the game is so compelling considering how simplistic it is at first glance.  But between the way the game effortlessly weaves in packs of smaller fodder to distract you from the large warships and beasts and the rhythm you develop to control the chaos it is most of all fun.  At 6 levels it is a bit short but you will almost certainly work to get to the end.

The beautiful graphics that were the game’s selling point haven’t aged well unfortunately.  The inconsistent frame rate takes some getting used to as well as the overall heavily pixelated look.  What does stand the test of time is the art direction.  Sega hired French artist Moebius (R.I.P)to provide artwork for the game and also drew inspiration from Hayao Miyazaki’s Nausica of the Valley of Wind, creating a dystopian future different from most interpretations of the past.  The mix of science and fantasy in the game’s universe is still unique in this day and age.  The levels range from ancient temples submerged in the ocean to sweeping desert expanses full of prehistoric beasts waiting to make you their next meal.

And I can’t forget the atmospheric soundtrack and the made up language all of Panzer’s natives speak.  They really went all out in terms of production values and seeing as how 3 sequels were eventually released the world building paid off.

It isn’t easy to play this classic of the past these days.  There’s always the original Saturn version its just a matter of finding a working system.  It was released for the PC around 97 or so but that version is hard to come by and can be a bitch to get working on modern versions of Windows.  The PS2 port was only released in Japan but that remains an option.   Panzer Dragoon Orta for Xbox includes a port of the PC game but you have to finish the game first to access it.  However you come across Panzer Dragoon it is more than worth your time.