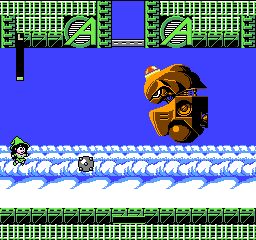 Krion Conquest is one of the most blatant rip-offs you’ll more than likely ever come across.  That’s a strong statement but one only has to take a cursory glance at the game for a few minutes to see the rampant similarities to Mega Man.  There’s nothing wrong with, ahem, taking inspiration from a popular source but Vik Tokai went a step too far in my opinion.  Although Krion Conquest has the look and feel of Capcom’s venerable platformer it isn’t as polished and when combined with the brutal difficulty I’m sure most won’t have the will to see it through to the end.

Originally released in Japan as Magical Doropie there’s a bit of an elaborate back story to the game that was all but stripped out of the game.  In the year 1999 war breaks out between the Krion Empire and the Planet Earth.  The robots of Krion are completely immune to all convention weaponry but magic.  With this in mind the witch Francesca is drafted to end this threat and save the world.  It’s not completely original but there was consistent plot development with frequent cutscenes in between levels that at least gave context to the war.  Aside from the intro it was all removed, leaving a hollow shell of a game in its place.

It can’t be stated enough just how blatantly Vik Tokai have stolen from Capcom.  Replace Mega Man’s helmet with a witch’s cap and his mega buster with a magic wand and you’d be left with Francesca.  Even the way she extends the wand to fire shots is the same!  It should be noted however that Krion Conquest debuted the ability to charge shots and duck years before the blue bomber would gain those powers.

Pausing the game will bring up a familiar weapon menu except in this case you start off with all of your powers rather than earning them gradually.  Four of these spells can be used freely (Normal, Freeze, Ball, and Shield) with the Fire spell being the only one that drains precious health.  As if they hadn’t gone far enough Francesca even changes color when you switch spells!  That note aside, each spell has its share of situational uses but it is the broom you’ll lean on the heaviest.

The broom is this game’s equivalent to Rush and while that might conjure up images of well nuanced platforming sequences you’ll get none of that here, just a ton of frustration.  Controlling the broom is more trouble than its worth; you have to press in the desired direction and attack to move which has its share of problems.  If you stray too close to the edge you’ll fall.  If you jump to avoid an enemy chances are it will keep going, leaving you to fall to your death.

Playing through Krion Conquest is an exercise in frustration but not the way you’re expecting.  For every good idea it has there is usually some element that is ruined in its execution.  Stage three takes place underground in the sewers, with Francesca having to surface every so often for air.  It’s a neat concept but in practice falls apart.  Due to bad enemy placement you’ll often barely make it by the skin of your teeth unless you decide to zerg rush.  The second half of the game is nearly focused entirely on flying with the broom, specifically all of stage 4 and it shines a light on just how bad the flying controls really are.  It sucks that the controls are more of a hassle than they should be as the level design, though derivative, is pretty sound.

Krion Conquest was already difficult in its original form and unfortunately that has only worsened for its American debut.  Most enemies require multiple hits regardless of the spell equipped and the game loves to put you in situations where cheap hits are unavoidable, namely anytime you are riding the broom for an extended period.  Health items are inhumanly rare and the game doesn’t even have the courtesy to refill your life bar after every stage.  The ultimate slap in the face comes with no continues.  With extra lives in short supply you’ll have little opportunity to practice the game’s harder segments before seeing the title screen once again.

Oddly enough as cruel as the individual levels can be the few boss battles in the game are relatively simple in comparison.  Their patterns are easily identifiable within minutes of each encounter (at least for me but I admit I’m not normal) and it merely comes down to execution.  Even the final stage and its three phase fight comes down to sheer perseverance rather than an excruciating finger exercise.

It’s not enough that the game plays near identically to any of Mega Man’s various adventures but it looks like it as well.  The tiles used to compose the levels sometimes look as though they were ripped from those games and wouldn’t look out of place at all.  There are plenty of enemies that are merely palette swaps of Capcom’s creations and bad ones at that.  I don’t mean to point out the similarities so much but when they are this blatant it can’t be helped.  The few times the designers decided to be original are the game’s best elements; many of the backgrounds are highly detailed and the bosses are creative both in looks and attack patterns.  I just wish there were more of this and less copy and pasting.

Ultimately Krion Conquest has its heart in the right place but fumbles it in the execution.  While it does a decent job of trying to separate itself from the series it draws inspiration from in reality its flaws will make you reach for those games instead.