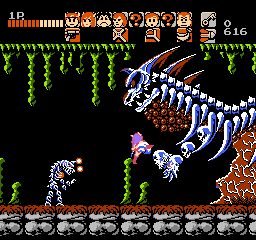 I know I can’t be the only who has thought of how awesome it would be if Nintendo or Sega were to create a game starring all of their mascot characters.  Of course Smash Bros. came along and wasn’t what I was expecting but still turned out pretty damn awesome.  Late in the NES era Konami picked my brain and decided my idea of the ultimate platformer was too good to pass up and so created Wai Wai World.  All right that’s not true but Wai Wai World does exist.  Never released in the US the game was fan translated and despite its faults is still a pretty awesome crossover.

Dr. Cinnamon has tasked Konami Man with saving six captured heroes and restoring order to Konami World.  To aid him in this endeavor he has created Konami Lady to be his female counterpart.  The story isn’t going to win any awards but it does provide impetus for the adventure ahead.  This is simply an excuse to create one big fan service adventure and in that regard Wai Wai World succeeds.

The cast of characters is a rundown of many Konami favorites with a few unexpected surprises thrown in that will be unfamiliar to US gamers.  Konami Man made many infamous cameos throughout the 8-bit era however it is here where he is actually playable along with his cyborg counterpart Konami Lady.  Simon Belmont makes an appearance along with Goemon from Legend of the Mystical Ninja and Mikey from the Goonies.  King Kong may seem a dubious addition to the cast however Konami did put out a Famicom only game based on the failed sequel to King Kong so it counts.  The one the majority will have no awareness of is Fuma from Getsu Fuma Den, a Famicom only action adventure that is awesome.  They’ve even tossed in a Moai head with legs who only carries his weight with the rest of the heroes.

Once you’ve rescued each hero you can switch between your assembled party members at any time like TMNT.  Everyone has their own life bar, weapons, and differences in terms of strength and reach making them optimal for certain situations.  Once you’ve gathered everyone it’s off to the final confrontation.  Though Wai Wai World is level based it has more in common with Metroid.  You are free to tackle the levels in any order and can leave when you feel like it.  Each world is massive in size and has optional sub weapons to collect that are sometimes mandatory to reaching the other heroes.  Don’t let the initial stage select fool you; this is one lengthy quest and with all the back tracking necessary to find items it will last close to 10 hours or more before you see the end.

Despite the ability to choose your own path through the game in reality you are only presented with the illusion of choice.  The game never outright states it but there is a set order to completing the levels by their design.  Konami Man/Girl are both limited in their abilities and so certain stages like the Pirate Ship are pretty much impossible to complete initially (the tentacle monsters on the platforms require ranged attacks).  Because you can’t rescue Mikey from said level you also can’t progress past the first segment of New York City.  Had both of the Konami pair been equipped with their guns from the start their versatility would allow them to overcome this.

One aspect that most will find hard to adjust to is the need to be at the outer edge of the screen to let the levels scroll.  Considering the high volume of enemies that come rocketing in off screen you won’t have much time to react and will suffer far too many cheap hits. The hit detection is also suspect with many of the enemies that require multiple hits before death completely ignoring your attacks.  To the game’s credit life restoring hearts drop frequently but this kind of bad balance seems a bit odd coming from Konami.

With these flaws in mind it isn’t a stretch to say that this might be one of Konami’s most difficult titles for the NES.  The price of death is pretty steep; if a character dies it costs one hundred bullets to revive them.  If everyone dies you’ll only have the Konami twins and half of your remaining bullets left to try and pick up the pieces.  At that point it is better to simply reenter your last password than try to grind out bullets to revive your party.  Each hero has a separate life bar like TMNT which you will definitely make extensive use of in order to survive.

The presentation in Wai Wai World is simply stellar, drawing upon elements from each of the game’s characters while avoiding being a simple retread.  Despite being released in 1988 this could easily pass for a late generation title with its large sprites and highly detailed backgrounds.  The game’s premise allows it to cover a swath of video gaming classics while still feeling like a cohesive whole and all of the individual characters have been redrawn rather than lifted wholesale from their respective games.  It’s a fan service overload and I like it.

The music and sound effects follow along the same lines with each hero sporting their own theme music when selected.  It’s actually pretty cool and the tunes have been recreated perfectly if not taken directly from each title though it does suck that it resets when you switch.  The sound effects have been taken straight from Castlevania II and it is a bit weird to shoot enemies with Mikey’s slingshot or Goemon’s pipe and hear the sound of Simon whipping skeletons.

Regardless of its flaws Wai Wai World is still a solid title that is entertaining and will last quite a while before you see the end credits.  It isn’t the crossover we dreamed of but it doesn’t have to be to provide many hours of fun.