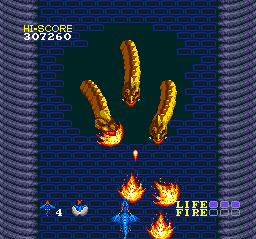 Looking back Dragon Spirit was one of the first arcade games I can remember playing and it isn’t a stretch to say that it left an indelible impression on me.  The NES was a significant step up from the bare Atari 2600 and games like Dragon Spirit and Double Dragon made me aware that the arcade was a step above that.  The NES port/sequel was well done considering the technical gap but it was the TurboGrafx-16 version that really caught my eye.  This near identical conversion was one of the system’s early highlights and an excellent game altogether.

When comparing the two I have to say Namco did a stellar job.  The resolution is naturally lower and some of the sprites have seen a slight reduction in size but other than that you could easily mistake this version for the arcade.  The color palette is a bit brighter but that makes little difference.  For its time Dragon Spirit was visually impressive in light of the fact that it doesn’t use any special effects, instead relying on good art.  That element has been preserved perfectly here and like R-Type made this the best port money could buy until recently.  The one dubious omission here is the game’s intro; come on!  Even the NES game managed to replicate it somewhat!

As the knight Amul (who transforms into a dragon) you utilize your fiery breath and bombs for ground targets to annihilate everything in your path to save the Princess Alicia.    It never occurred to me before now that Namco essentially took Xevious and put it in a fantasy setting.  Maybe it’s because I was never fond of Xevious and pretend it doesn’t exist.  Phelios is also the same with a Greek setting.  Wow I think I’m dumb.

As a big ass dragon you’ll have to approach this game a little differently than your average shooter.  Your size makes you a large target and the game’s unforgiving hit box means even the tip of a wing grazing an enemy or bullet counts as a hit.  Any dreams you may have had of darting around bullets and running sorties like Maverick in Top Gun will have to be saved for another game as it’s even more imperative that you take care in what you fly over.  That three hit life bar barely makes any difference as it gets drained fairly quickly with no way to restore health; the bastards don’t even do you the courtesy of topping you off after a boss battle!  The tough challenge is the one element of the arcade game I wish wasn’t carried over.

There aren’t many power-ups in the game but the few that exist significantly upgrade your firepower.  Blue orbs cause you to sprout another head, up to a maximum of three for triple the fiery breath.  Red orbs will increase your attack power when collected in groups of three.  These are the main power-ups you’ll see the majority of the time so luckily they are effective but do come with an added risk. Three heads make you an even easier target to hit but it’s a problem you’ll have to deal with as the added firepower is necessary.  It’s all part of the fun I say.

There are a few other weapons that only last a short period and grant new Dragon forms, one of which you’ll wish was the default.  There’s a golden dragon with a homing flame, a silver dragon with a three way wide shot, and a mini dragon form that makes it easier to dodge bullets.  That last one is potentially game breaking so I can see why it’s rare.  It would have done the game a world of good to have these weapons show up more frequently as it would have helped with the brutal difficulty.

At nine levels long this is a pretty massive undertaking by shooter standards.  When combined with the brutal difficulty you’ll certainly get your money’s worth.  The levels cover most of the standard video game tropes such as ice, fire, and jungle yet somehow they still feel fresh.  Possibly due to Hucard limitations the seventh and eighth levels have been replaced by 2 stages that reuse the castle assets for the game’s climax to save memory.  There’s a new boss to fight at least to make up for it but a new theme for these levels would have been appreciated.  One element that I feel doesn’t get enough attention is the soundtrack.  Dragon Spirit has a rising score that can change from upbeat and adventurous to dark and foreboding without missing a beat.

While I do praise Namco for producing such a faithful port I will admit that Dragon Spirit in its NES incarnation is a much more playable game.  Technically it’s a sequel but the majority of its levels are based off the arcade but that is beside the point.  The hit box was made more forgiving since the sprites are smaller and that right there makes it less frustrating.  There are additional weapons such as mini dragons that function like options and all of its weapons appear more frequently.  Regardless of its near arcade perfection it does feel a bit…dry in comparison.

Frustration with the punishing difficulty aside Dragon Spirit is an excellent conversion of a pretty good game from 1987 that still holds up today.  It’s not in the same class as the Star Soldier series but it’s certainly better than generic tripe such as Ordyne and Dead Moon.