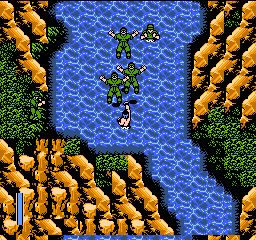 I have a love hate relationship with the Ikari Warriors series; I liked them in the arcade to a degree but absolutely cannot stand them in their NES forms.  Both Ikari Warriors and Victory Road are two of the worst games in the system’s library and I’ve more than made my disdain for them public.  So it is reasonable to see how I could have had low expectations going into this third installment.  It’s nice to be pleasantly surprised.  Ikari III: the Rescue completely throws out nearly everything established in the first two games and is better for it.  There are still a few niggling issues of course but this is still a solid title in the end.

First on the agenda is bringing it back down to reality.  The game wisely ignores the fact that Vince and Paul took an intergalactic detour (seriously what the fuck was up with that?) and pits them against an organization named Crime Ghost.  These evildoers have kidnapped the President’s daughter, prompting the best soldiers in the world to be drafted to save her, namely you.

Rather than a scrolling shooter the action has switched to a beat ‘em up.  Things are kept simple as you can only punch, kick, and jump kick.  The kick in particular is a bit weird as it is a full roundhouse kick that I’m sure was designed to be able to take out a group of enemies in one go but that ain’t happening here.  The jump kick is trickier to land but can be abused as you are invincible while airborne.  Secondary weapons are scarce; there are occasional items in the environment you can pick up and throw and you can get a rare machine gun with limited ammo but the focus is squarely on fisticuffs.

What the hell are they doing?

Considering you are up against an international crime organization who seem to employ nothing but soldiers in camo gear it’s really odd that no one seems to have a gun.  This has to be the poorest army I’ve ever seen in a videogame as they have apparently invested their money in kung fu lessons rather than weapons.  If there is one criticism I have of the game it’s the lack of varied enemies.  You are going to see the same generic green guys about 90% of the time which gets old fast.  To its credit it doles out new enemies in each level but you can probably count the entire rogues gallery on two hands.

The pacing in the game is really odd.  Most of the time you’ll be swarmed by groups of 3-6 soldiers who all go down in one hit or seem more interested in their own acrobatics than attacking you.  The collision detection is suspect with the roundhouse kick being the most glaring example.  When you’re surrounded and use you should clearly take out everyone within a 360 degree radius however it completely misses most of the time.  Punches that should clearly land have no effect and it is at its most infuriating dealing with the twin bosses in the third stage.  It’s apparent someone realized this as there are life restoring hearts every few feet.  It helps but if they realized their mistake maybe someone should have fixed it rather than offering a band aid fix.

The constant hearts don’t help avoid cheap deaths however.  The game has a bad habit of throwing in tougher enemies that require more hits among the fodder; these bad asses are indistinguishable from everyone else and chances are you are going to take a few punches as a result.  If you are hit with a projectile or any other thrown object it equals instant death.  As you can imagine these instances usually happen to come out of left field.  It certainly makes most boss battles more interesting that’s for sure.

Even in light of these issues however the game still isn’t overly difficult, mostly due to infinite continues.  As a bonus you begin exactly where you left off, meaning you can simply force your way eventually with some perseverance.  The NES port has an exclusive undersea level that is basically a shooter and a highly competent one at that.  Overall this isn’t the longest adventure at just six levels but it’s fun while it lasts.

In the arcade Ikari III was pretty stunning with large sprites and plenty of background animation in its world.  The NES port obviously can’t match it but does a decent job replicating the look of the game.  It helps that SNK did the port themselves instead of hiring god damn Micronics so it at least runs at a double digit frame rate.  It has a similar look to Guerilla War except more vibrant and with more varied environments.  Next to the solid gameplay the graphics are probably the second area I’m the most surprised by.  Both of its prequels were flickering, slowdown filled messes that seemed as though they were programmed by a team with broken fingers.  It is a bit uneven however as the earlier stages are artistically sound before the game devolves into a series of warehouses and such that all look the same.

There you have it.  Ikari III is better than I could possibly have imagined which is a miracle all things considered.  It isn’t the first action game I would go for but at the end of the day it is a solid title with a few rough spots.