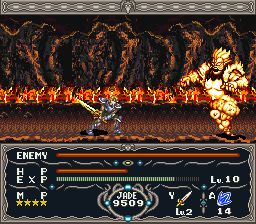 Drakkhen was the first SNES RPG I had the misfortune of experiencing.  As a PC game ported to console it was certainly unique but its interface and gameplay were more suited to a mouse and keyboard than a controller.  Yet I somehow still found it compelling but not enough that I would ever recommend it to someone else.  It remains a curiosity within the SNES library as there weren’t many games like it.

You wouldn’t know it just by looking at it but Dragon View is actually a sequel to Drakkhen.  This little known sequel throws out nearly everything associated with that game for a more refined experience.  Dragon view is a sequel by association only and though it is better for it I do question why it is considered part of the series and not its own IP when it shares so little with its predecessor.  Regardless this is a solid yet overlooked action RPG that is uniquely different from its contemporaries and has plenty to offer fans of the genre.

Alex is a young warrior in training who lives in the village of Rysis with his girlfriend Katarina.  Life is simple for the two but all that changes when a mysterious sorcerer appears, overpowering everyone in the village and whisking Katarina away to parts unknown.  Alex grabs his sword to embark on a grand adventure to rescue the love of his life and save the world.

The story isn’t the most original but how it’s told is certainly interesting.  The game uses a first person narrative style for all of its text, as if you are reading a storybook.  It’s definitely weird to see and I can guarantee no other game during that time experimented with such a localization choice.  Its unique, I’ll give it that, but it makes nearly every conversation needlessly verbose and some of the game’s heavier moments more dramatic than they really are.  I wouldn’t say it is bad, just not to my tastes.

A lot has changed in the years between games, most of it for the better.  You still navigate the world map in first person however enemies are represented as clouds of smoke rather than attacking randomly, giving you the option to completely bypass combat if you like.  The auto battles of the past have been replaced with side view action along the lines of an old school beat em up like Double Dragon.  I for one welcome the change as battles are faster and more active rather than sitting on the sidelines as an innocent bystander as your party is slaughtered beyond your control.  Though you venture alone enemies can now attack in groups of up to four.  It sounds unfair but they are easily dispatched as it boils down to your skill rather than a roll of the die.

Exploration of towns and dungeons are also done using a similar view.  The fact that there are actually towns this time is a nice shift, with shops to buy items and folk to converse with.  It’s a lot like Zelda 2 except you know, not as obtuse.  This is a fairly large world, with progress blocked off until you meet certain criteria.  There are plenty of optional locations off the beaten path for the exploratory type, mostly to power up your two primary weapons and magic rings.

The one element that has not changed unfortunately is the first person overworld.  Navigation is just as difficult in spite of the on screen compass and map.  It also doesn’t help that turning is excruciatingly slow due to the long viewing distance and presence of sprites on the field.  At the very least you can avoid random battles if you so choose but traveling twenty feet is far more laborious than it should be.  I can appreciate what they were going for but it barely worked the first time and was only more frustrating in light of the many RPGs with sensible overworld maps.

Speaking of maps, you might need to draw up your own for the dungeons by the game’s midpoint as they expand in size pretty quickly.  The dungeon design can be fairly complex as they usually span multiple floors with plenty of one way doors and trap floors to make you retrace your steps.  These have the side benefit of making you face respawning enemies and in turn becoming overpowered by the time you reach the bosses.

In terms of presentation Dragon View is pretty accomplished.   Despite my disdain for the map it is technically impressive what they were able to accomplish using sprite scaling techniques to present a pseudo 3d world without the Super FX chip.  The day/night cycle is sorely missed however in its place is a wider variety of terrain.  The side view towns and dungeons are incredibly detailed but are a step back in terms of monster design.  The unique creatures that permeated the world have been replaced with generic demons and other creatures you can find in other games.

Despite that one black spot Dragon View is a quality title and one that has no close comparisons to its game play.  Don’t let any negative impressions of its predecessor color your perception as the two games share very little; trust me it’s for the better.  It has a low profile so it is probably dirt cheap and worth the price.