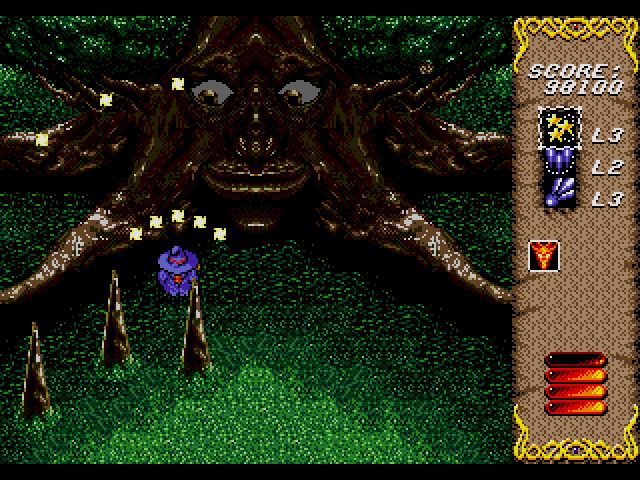 Much like platformers starring cavemen (RIP Chuck Rock, Bonk, Bignose the Caveman, Dino Riki, etc.) shooters starring witches seemed to undergo their own renaissance in the 16-bit era and would last up until the PlayStation 2’s release.  Gamers in America were completely oblivious to this as 90% of these games never came over with the rare exception such as Magical Chase and Cotton: Fantastic Night Dreams.  It’s too bad as many of these games were simply fantastic such as Twinkle Tale, a Genesis shooter that was oddly never picked up for release.  It’s an amazing game in an underserved genre and one that definitely would have stood out had someone released it here.

Though it bears a strong resemblance to Phelios and Elemental Master Twinkle Tale has more in common with Mercs as an overhead shooter.  Think of it as the Sega equivalent of Pocky & Rocky.  This is not an auto scrolling shooter however and in fact you move at your own pace although there is no backwards movement.  While the general gameplay is different the fantasy theme is the same as the aforementioned games, which was not typical of this genre.  It definitely helps the game stand out from the likes of Red Zone and Skeleton Krew (whew, that’s a lot of name dropping).

Saria is armed with 3 interchangeable spells that all have their uses throughout the game.  The Diamond Arrow is your wide beam; the Shooting Star is the most powerful but only fires straight forward, and the Silver Comet is the weakest but homes in on enemies.  Aside from the three spells are 2 bombs, a weaker homing projectile and a more powerful fire dragon that has gaps in its offense, ensuring that they aren’t too overpowered.  Even using a full stock of all three the bosses were still able to smile in my face (figuratively) and keep coming back for more.

Each spell can be leveled up three times and as an added bonus any potions collected while using a max level spell will go toward another one.  Maxing out your spells can be done within minutes of starting any level but keeping them that way is the challenge.  Any hits will knock them back a level which is terrifying in the most hectic moments.  It’s never a good idea to try and rely on just one particular spell as they all have their drawbacks.  In fact I would even say the game is near impossible if you try to play it that way.

There’s a great deal of variety from one level to the next as you explore a fantastical array of settings.  You’ll visit an icy temple, the inside of a living tree, ancient ruins and even the underworld, all while being accosted by magical beasts.  The level design is never straightforward and makes the game feel like an adventure title as you’ll explore the numerous rooms in a castle or stop to converse with the few locals.  Later in the game there are a few shooting segments that are a nice change of pace and are well executed.

Speaking of, the pacing is perfect; for every large group of enemies you’ll encounter there is usually a brief period of rest before the next set, allowing you time to pick up a few items if necessary to press on.  Nearly every level has branching paths that ultimately lead to the same end goal but do provide a nice degree of choice as you plod along.

Twinkle Tale can be tough at times but above all else it is fair.  Early on when you are limited by your three hit life bar any mistakes can be devastating.  There are frequent life restoring potions at every turn early on to balance this out.  But after the second level your hit points will increase by one after each stage up to an eventual max of 9.  It is at this point that the difficulty curve gradually increases and the game holds your hand less.  Still, one life and only three continues is a bit of a steep mountain to climb with extra credits through scoring being crucial.  The game is so fun thought that it actually works.

Although it was released in 1992 Twinkle Tale still compares favorably to many late era Genesis titles based purely on its strong art direction.  The entire world takes place on a floating island and the frequent outdoor areas give a beautiful glimpse at the world below.  The darker color palette places a heavy emphasis on lighting and shadows and produces some pretty striking areas, most notably exploring the insides of the World Tree of stage four.  It’s a fantasy thrill ride that looks progressively better with every level right up until the game’s final moments.  The massive bosses are insanely detailed and are a joy to watch in motion as they are to fight.  The music doesn’t reach the same heights unfortunately but I found it unobtrusive in the grand scheme; that’s about the only compliment I can give.

Unfortunately Twinkle Tale only had a small print run leaving it incredibly rare.  It was never ported to any other system or re-released digitally so chances are you’re going to pay out the nose for it.  There is a little bit of story and the game has received a fan translation which is sadly the only way to play it in English.  Despite its likely high price the game is truly fantastic and arguably the best overhead action game for the system.