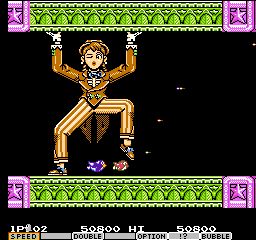 I’ve always been fascinated by Japanese games that were released in Europe and not the US.  Cultural differences are usually the culprit most of the time however there are many cases that are baffling upon closer inspection.  The Parodius series is one of these; a good number of the games were released by Konami in the UK however the series completely skipped the US.  To be fair there is some questionable content in some of the games yet in the case of Parodius Da! Most of it was edited out.  I’d hate to assume Stinger didn’t light the sales charts on fire and was the reason we missed out, especially as this NES port, released as simply Parodius in Europe is one of the best NES shooters America missed out on.

Parodiusu Da! Shinwa kara Owarai e was ported to a number of platforms, from the Famicom, SNES, PC Engine and even the PlayStation and Saturn.  All of these ports were fantastic, with some, especially the Super Famicom version being almost perfect.  Obviously both 32-bit editions are arcade perfect but that is to be expected.

The NES edition is the most interesting.  Clearly any fool would know that a perfect match to the arcade machine isn’t possible but despite the technological gap it turned out much better than should have been expected.  And as a bonus it has a number of exclusive and hidden levels that make it worthwhile for fans of the game to seek out.  There are definitely flaws but those only slightly hamper what is otherwise an excellent shmup.

Though Parodius is primarily a parody of Gradius and its ilk it also serves as a celebration of the various spin offs Konami has created over the years.  Of the four available weapon sets each is representative of a Konami IP.  The Vic Viper is from Gradius and uses the basic weapon set from that series and probably the go to for those unfamiliar with the rest.  The Octopus represents Salamander, with its incredibly useful two-way missiles and expanding Ripple laser.  This is my personal favorite but you’ll have to adjust to playing as an octopi.  Pentarou’s weapons come from Gradius III with a different laser.  The photon torpedoes are powerful but only travel below you.  Its lasers are actually spread shots that expand on impact but are slower to fire.  Twin Bee is from Twin Bee minus the bell juggling non-sense.

Speaking of the bells they are here but easier to manage due to the side scrolling viewpoint.  The number of effects has been reduced somewhat but the few that made the jump are potentially game breaking.  The red bell’s laser wall can be a quick last minute life saver however the flashing bell’s enlarging invincibility can make any boss encounter trivial provided you can juggle a bell long enough to reach that point.  It’s easier said than done due to the shifting environment but worth it as it lasts longer than it reasonably should.

Parodius is a slower paced game than most shooters but its lackadaisical pace shouldn’t be taken lightly.  Its tight hallways and corridors are densely packed making it easy to get lost in the ensuing chaos.  It’s amusing that a game that tries so hard to be lighthearted is in actuality pretty vicious but I prefer it that way.  While the game’s slow pace works for the most part there are a few annoying areas where it slows to a crawl, mostly involving invincible bosses that are more about surviving for a few minutes rather than getting into a heated exchange.  The game does pick up towards the end where I’m sure many will probably fling the controller in rage at the number of deaths they’ll experience as the challenge ramps up significantly.

At seven levels this is shorter than the arcade game but makes up for it in a few ways.  There’s an all new level that takes place in a circus during the main quest; it fits in with the game’s overall wacky vibe perfectly and is probably the best looking in the entire game with unique art and bosses.  For the more astute gamers there are two hidden levels, one of which actually takes place inside a Moai head’s mouth!  This can be a pretty difficult game so the seven main levels will probably last most gamers quite a while before they see the end.  The hidden levels add some incentive to go through it all over again on top of it just being a fun game overall.

Konami did an excellent job squeezing the majority of the arcade game’s fantastic art into the NES’s confines and I daresay this is easily one of the best looking shooters for the platform.  The absurd art design and wacky enemies made the jump nearly fully intact.  The background detail is pretty amazing all things considered; I can probably count on one hand the number of shooters that looked better on the platform.  There is some light censorship, with the Vegas dancer being replaced by a fully clothed galactic dancer and the female Moai head that shot out questionable smaller Moai in a manner resembling a blowjob blowing hearts instead.  Thematically I think they did a good job replacing those elements in a sensible manner.

As much as I like the graphics it is immediately apparent that the game is pushing the system especially hard with the rampant slowdown.  Much like Gradius II once you have a full complement of options and unleash a spread of weapons fire the game slows to a crawl.  Unlike that game Parodius is full of tight corridors with plenty of turrets and bullets which makes this even worse.  It’s egregiously bad in the fourth level, which might as well be a slide show at times.  Honestly this is the only flaw in the game and one that I feel can be adjusted to considering how much fun you’ll have overall.

I have nothing more to say other than why the hell did this not come out in America?  Parodius in any form is a rocking good time and the NES version is just as amazing as its more advanced cousins and worth a purchase.