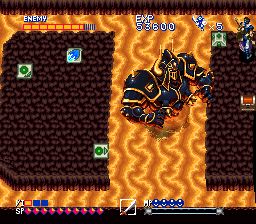 Hal Laboratory has been an indispensable partner to Nintendo dating as far back as the Famicom era.  A diverse developer able to create titles in nearly any genre they have been a Nintendo first party for almost 20 years.  But prior to achieving that status they published their own titles as well as developed for other companies.  One such title was Alcahest, a Square published action RPG that sadly stayed in Japan.  I question why as it isn’t story heavy and could have been localized in a week at most.  Anyway thanks to the work of fan translators this excellent title is available for the English speaking world to experience.

Long ago the God of Destruction Alcahest came to the world and ended the era of peace until a lone warrior (who looks like way to close to Simon Belmont with a sword and shield) with the aid of four Guardian spirits sealed him away.  It is said that when Alcahest returns a new hero will appear to stop him. Evil forces lead by Babilom conspire to kill the unaware hero Alen before this can occur, setting him on the path to awaken the Guardians and save the world.

This would be Hal’s second attempt at an RPG after Arcana and one that is far removed from that earlier effort.  Though technically an action RPG Alcahest leans more heavy on the action side and has the structure of title like Valis IV rather than Soulblazer.  The game is chapter based with only one or two towns to explore and no form of currency as new weapons are given at chapter’s end.  The experience gained is used to earn continues to restart in the same room rather than the beginning of each chapter.  All stat growth such as HP and MP is gained through found items, meaning you can possibly miss these important items and end up screwed.

Though you start off alone throughout the quest you will have the aid of the Guardians associated with each sword as well as temporary party members.  The Guardians once summoned will fight by your side and provide support in different ways for a few seconds.  The rotating cast of partners provide backup with some heavily overpowered; both Sirius and Garstein’s attacks are long range meaning they will actually do most of the work for you.

In many ways Alcahest is what a 16-bit sequel to Crystalis might have been.  Many of its mechanics are the same with four interchangeable elemental swords and numerous charge attacks for each.  Thanks to the SNES controller you won’t have to fumble about in the menus constantly to switch as it is accomplished with the L+R buttons.  It avoids the annoying elemental resistances of enemies but does promote switching weapons by giving each sword different attacks when charged that prove more effective against certain bosses and obstacles.

This is a fast paced game and I don’t simply mean Alen’s walking speed.  Events occur at a brisk pace and there are very few items needed to solve the game’s few “puzzles” if you can call them that.  There are usually only three quest items per chapter which you’ll come across naturally as you progress.  You’ll almost never have to enter the game’s menu to use items as they are used automatically when necessary, allowing you to stay on the go at all times.  Combat is aided by jump pads that will either send you rocketing forth or careening around each level.

Due to the game’s pace most of the generic fodder enemies pose little threat leaving the game incredibly easy.  Chests that refill your vitality and magic lurk around every corner meaning even the sloppiest players will still manage to survive.  The frequent boss encounters are the game’s biggest challenge however between the Guardian’s magic and whichever partner you might have along for the ride most will go down pretty quickly.  The few that you face alone such as the Dark Dragon and the Gaza duo are the rare tests of skill that I would have liked to see the game provide more of.

Alcahest isn’t the most striking SNES title but it does have its moments.  The artwork and character design are generally well done and there are a few pretty backdrops every now and then.  There’s a great deal of variety from one chapter to the next and it’s hard to pin down what age the game takes place in as there are air ships and cyborgs alongside knights and demons.  Special effects such as the pouring rain of Chapter 3 and the mode 7 platforms of Chapter 2 are used sparingly to great effect.  The massive bosses are the one area that the game excels with a few screen filling bad asses are as much a challenge to face as well as sight to behold.  The music is solid yet unspectacular with few memorable tracks and at the very least does not detract from the action.

Alcahest is a title that I would recommend to both action gamers as well as fans of action RPGs.  It has enough story driven content to please RPG fans and is well paced to keep the attention of those who like twitch action games.  It sucks that there isn’t an official localized version of the game but you can muddle through it without any knowledge of Japanese with some difficulty, not that I would recommend doing so.