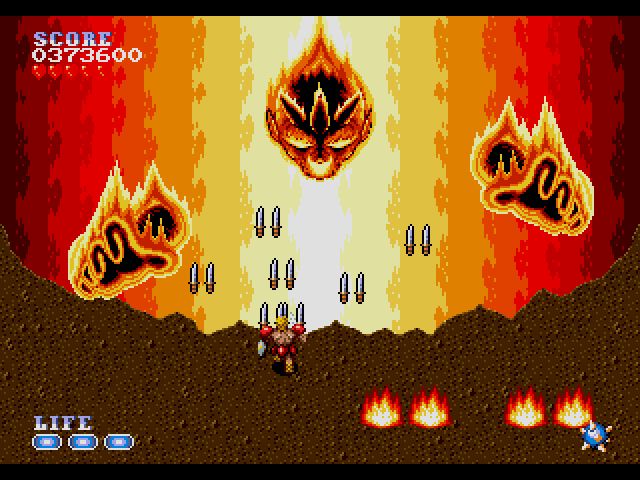 As varied as the Sega Genesis shooter library is the vertical shooter is strangely underrepresented.  There were a few stand out titles such as M.U.S.H.A, Zenon 2, and the infamous Zero Wing but nothing on the level of Lightening Force or Gaiares.  Oddly enough the vast majority of its vertical catalog never left Japan.  Undeadline is one such endeavor, a game that would have immediately stood out from its shmup contemporaries thanks to its undead theme.  It’s also one of the most difficult games for the platform.

Before the dawn of man the world was inhabited by gods and giants who vied for complete rule over the planet.  The giants created four living weapons too powerful to control that in the end wiped them out and were lost.  Now a new war is brewing between demons, led by Count Brahzen and humans under the rule of King Fahrenheit.  With rumors of Brahzen attempting to revive one of the weapons it falls to a fighter named Leon to awaken an equal power and stop him.

Originally created for the MSX2 and then remade for the X68000 PC before finally landing on the Megadrive something was lost and gained in each incarnation.  The cool intro of the original is missing from both ports but they also have an extra level as compensation.  The biggest blow to the Genesis version is the loss of the wizard and ninja, leaving only the fighter as the playable character.  Each class specialized in a specific category and also were better with certain weapons.  By raising your stats the effectiveness of those weapons increased; it was good strategy to use a particular character on a given level and the game suffers because of it.  At least the fighter is somewhat well rounded to make up for it.

There are a host of weapons and items in the game with treasure chests at every turn that allow you to cycle through each one.  Each weapon can be powered up to three times with some changing dramatically at their peak.  I’m not even going to bullshit, of the seven weapons the spread shot is the absolute best choice.  Once fully powered it covers a wide spread in front and even covers your backside.  The others have their situational uses such as the fire but come with far too many drawbacks to be effective.  The axe only increases in speed and power, the sickle’s arcing attack is too unpredictable and the bombs just plain suck.  In any other game having options is mandatory; here they default you back to the dagger.  Three extra drones throwing daggers is still a bunch of crummy daggers.

There are a few defensive measures at your disposal to mitigate damage and brother you’ll need em.  At any time you can put up your shield to block most projectiles in the game.  You’ll be amazed at some of the attacks your shield can deflect and on certain bosses (such as the cemeteries’ Grim Reaper) it is an absolute must.  You have a rotating shield that will protect you from most forms of damage, the only caveat being you can only use it three times.  Other optional items exist such as a force field and invincibility but these only last a short duration.  If you truly want to make any progress in the game you need to use everything at your disposal.

You have the option to complete the six initial stages in any order before the finale but it doesn’t matter where you start; you are going to die frequently.  I’ve played many a hard game and Undeadline ranks near the top.  New enemies pop in at a never ending pace from all corners from the opening moments right up to the end level boss.  It’s so bad that you’ll rarely have a chance to cycle through the weapons and items in each chest at your leisure before taking a hit.  The right weapon (spread shot) can alleviate this somewhat but the attacks are still relentless.  Until you’ve played each level a few times (and you will) and memorize enemy placement and where chests are located it will seem impossible but the chaos can be managed.  They just could have been more reasonable about it.  I mean Christ there are even items that take away health and default you back to the stupid dagger.

Part of what makes the difficulty so extreme were the changes made from the MSX original.  In that game you had a lengthy life bar and could take many hits.  Here you can only sustain three hits which is woefully inadequate.  You could also hold three items at any given time which would have been a god send.  That game was much slower paced so I can see how the developers might have wanted to create some tension but I feel they went a bit too far.  2 continues and no checkpoints during each level (meaning you start from the beginning every time) is a tough pill to swallow.

My feelings concerning Undeadline vary wildly.  During its best moments Undead Line is as enjoyable as Pocky & Rocky, a game that it shares a few gameplay similarities with.  But those are all too brief as the game seemingly tries to suck all the fun out of the proceedings in an effort to send you to the game over screen.  If you can stomach some of the most vicious shooting action from that era than there is a solid game underneath its flaws.