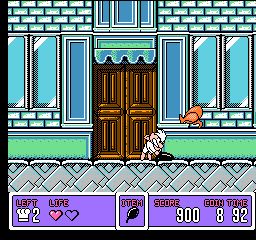 Jumping to conclusions and making assumptions about video games is common nature when there are so many to choose from.  This was especially prominent in the 8-bit era where there were few video game magazines aside from Nintendo Power and EGM providing coverage of the games released.  By the latter years of the generation as the 16-bit war was ignited NES titles slipped through the cracks, which sucked as some of the best platformers conceived were hitting left and right.

Panic Restaurant is a game I’m sure I passed over at Blockbuster Video and the flea market due to its ghastly cover.  As a late 1992 release it received very little coverage; I only remember Nintendo Power giving it the time of day but this was after the fact.  I wrote it off as a Burgertime clone when in reality it was exactly what I imagined that game to be when I first heard of it.  In reality Panic Restaurant is one of the best NES titles of all time, only limited by its brevity.

Cookie, the owner of the restaurant Eaten is dealt a harsh blow from falling fruit by his rival Ohdove (obviously it should be Hors D’Oeuvre in keeping with the food motif), who knocks him out and takes over his business.  Now it is up to Cookie to battle Ohdove’s army of foodstuffs to win back his restaurant.

As the name suggests the game is based wholly around food.  Each level is named after a dish on a menu such as Appetizer, Meat, Fish, and Dessert.  The stage titles give somewhat of an idea of what to expect in terms of enemies and such but that is only half the tale.  The food motif permeates not just the enemies but the environments themselves with the locations you’ll visit taking place in a freezer, an upscale restaurant, a kitchen, and even the sewers for some god forsaken reason.  At least they’ve largely avoided the standard platforming tropes.  Admittedly the game doesn’t break any new ground within the genre but its central conceit of a chef in a mad world full of living food stuffs is so well realized that it rises above that.

You are armed with a frying pan that is quick but suffers from short range.  There are four additional weapons that radically alter your attack but are immediately lost upon taking a hit.  The spoon is the least exciting but functionally the best as it is essentially a longer range frying pan.  The fork is used like a pogo and turns cookie into Scrooge McDuck.  Permanently, as you no longer walk but hop around.  It is situationally useful but makes any precision platforming near impossible.  Dishes are your only long range option however they are thrown in an arc.  The rare cooking pot turns you into an invincible whirling dervish for a few seconds.  There are other items, such as food to refill health, chef hats for extra lives but the most important are the coins dropped by enemies.  These coins are used in the slot machine for a chance to win various prizes, extra lives, points (which grant lives), but the best are extra hearts to extend your life bar.

The game resembles a giant food fight gone badly as skating ice cream, headless chickens, exploding apples and machine gun like boxes of fries run rampant.  The bosses are even wackier. Witness a microwave oven that opens up to release fried chickens in rapid succession or a frying pan full of popcorn which loses its marbles when hit too many times and releases its contents.  Some of these battles are entirely unique, such as stage five’s massive ice cream cone which devolves into a race against time as it seeks to destroy the floor from under you.  The final battle against Ohdove throw out everything for a

Panic Restaurant is a bit on the easy side due to its near perfect difficulty curve.  Initially you only have two hearts but chances are if you’ve been picking up every coin dropped you’ll have enough to gain at least one or two more on the slot machine between levels.  This allows some leeway for sloppy mistakes but that ends at about the fifth stage.  Here the challenge ramps up considerably with devious enemy placement and more of a focus on carefully timed jumps.  The last two levels also suffer from heavy slowdown which is also confounding but nothing you won’t be able to deal with.

Really the only negative patch on the game is its length.  The six levels fly by in the blink of an eye and because of its steady ramp in challenge plus infinite continues most will have it licked in an hour or so.  But in that time you’ll have an insane amount of fun.  There are a few bonus levels in not so hidden areas that only makes it easier; if the game had two more levels it would have been near perfect.

Panic Restaurant differs slightly from its Japanese counterpart with a redesigned protagonist.  In its Asian incarnation Kokkun is a young chef who attacks with a mean headbutt.  For its American debut he was redesigned and now looks like the love child of the KFC Colonel and the Chef Boyardee, uh, chef.  The change had to be deliberate but has very little impact on the gameplay.  The game was made easier by having fewer enemies and more power-ups.  We definitely won out in this regard.

Man Taito were truly on a roll in 1992, with the likes of Kick Master, the phenomenal Little Samson, Power Blade 2, and now Panic Restaurant under their belt.  These were all gems that deserve a higher profile.  Panic Restaurant in particular is hard to find as it suffered from a low print run and I say if you are a fan of platformers and can find it at a reasonable price go for it.