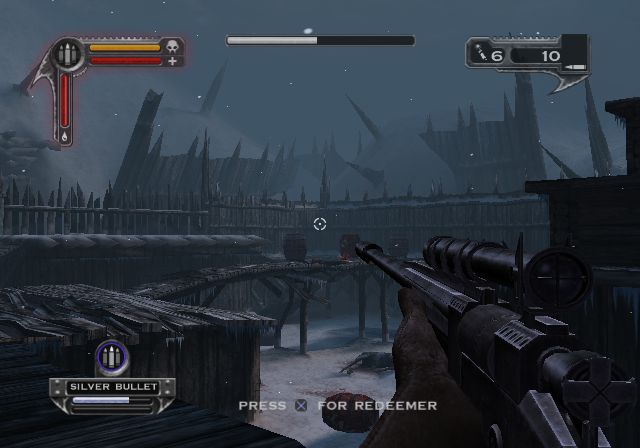 Halo hit the industry pretty hard in 2001 and is largely responsible for sparking the console first person shooter market along with Goldeneye.  It also legitimized Microsoft as a participant in the console war and was the best launch title for the Xbox.  Actually it might have been the only worthwhile game available but I digress.  Although the PS2 was the dominant system at the time it had no fps even remotely of the same quality which was a notable gap in its library.  In 2004 Capcom and High Moon Studios teamed to release the long delayed Darkwatch, a game that draws no small amount of inspiration from Microsoft’s series and would be the only worthwhile Halo alternative for PS2 owners until Killzone.

Jericho Cross is an outlaw in the old west whose only obligation is numero uno.  Unfortunately his selfish ways unwittingly unleash the ancient vampire lord Lazarus during his train robbery.  For his part in this disaster Lazarus turns Jericho into a vampire but he is conscripted into the Darkwatch, an ancient order before fully turning.

This is heavily story driven which is surprising since the entire cast of the game boils down to just 6 or 7 characters.    Once again the Halo touch rears its head as Cassidy fills the role of Cortana and occasionally other operatives fight alongside you and provide chatter and mission updates.  There are a large volume of cut scenes, actually a bit too many if you ask me.  The voice acting is top notch however the story isn’t as great as it should be considering how much effort was dedicated to it.  Your morality choices throughout the game will send you down two paths towards the end with separate final boss battles and endings.  They aren’t so different that you would want to go back and play through the game again despite its medium length however.

If you threw Halo a few hundred years into the past Darkwatch is what you would end up with.  To be frank there isn’t an original bone in its body however the game manages to pull together all of its disparate elements to form a competent and most of all fun first person shooter in a setting that wasn’t too common at the time.  The PS2 version lagged behind its Xbox counterpart in frame rate and online multiplayer but was still a pretty damn good game with an enjoyable single player campaign now that that is no longer an option anymore.

Morality plays a large role in Jericho’s development as you are presented with good and evil choices throughout the length of the adventure.  These usually involve killing or offering salvation to innocent bystanders bitten by Lazarus, with the results usually being immediately apparent.  Your decisions will send your vampiric powers down two paths and you are free to mix and match to an extent although you’ll reap the greatest rewards by sticking to one side.  The advantage is tilted toward the good side as the evil powers that sound cool aren’t very useful such as turn undead.  Sadly it doesn’t have any impact on the story’s outcome save one choice that will decide which ending you’ll receive.  Knights of the Old Republic this is not.

There’s a decent array of weapons indicative of the era such as shotguns, crossbows, and the standard redeemer that all double as highly effective melee weapons.  I actually used melee attacks far more often than regular shots, partly because I suck at dual analog first person shooters but also because its easy to behead enemies in one shot.  Though you start as a regular human it isn’t long before you are bitten and your vampire powers begin to emerge.  Darkwatch uses the regenerating shield mechanic made popular in Halo, which means as long as you can find cover your life bar is protected from damage while your blood shield absorbs hits.  The game differs in that most enemies will drop blood orbs that will replenish health and considering the number of waves you’ll deal with chances are you’ll spend most of the time at full health.  The combination of the two isn’t as game breaking as you would expect however; it only takes a few seconds for most fodder enemies to tear both to shreds if you aren’t careful.

The now standard dual analog controls have been adapted meaning fps fans can immediately jump right in.  Nearly every button on the controller is used which is slightly overwhelming at first but the controls can be fully adjusted to suit your needs.  Response is quick and targeting is accurate, which is important as enemies take location specific damage.  It is an effective tactic when dealing with a particularly tough crowd but can also backfire, as Banshees become more aggressive and attack from a distance exclusively if their arms are blown off.

The single player campaign lasts around 10 hours or so which sadly is double the length of most games today.  You won’t necessarily visit too many locales during that period as the game leans a bit too heavily on its wild west setting, with most levels taking place in abandoned mines, caverns, and the open desert.  There are a few horseback riding sessions for some variety but more could have been done.  What does keep the game exciting in light of this is the intelligent enemy AI.  Basic zombies are stupid but will almost always attack in groups which is especially dangerous in tight corridors. Gunslingers smartly attack from a distance and actively avoid your gun fire and melee attacks.  Banshees coordinate attacks with one another, making them some of the most difficult enemies to deal with.  Almost every encounter is exciting though I do wish there were more enemy variety.

While the Xbox version had online multiplayer through Xbox live this PS2 edition only offered a cop mode instead.  At the time it wasn’t a fair trade off but now in light of the servers for the original Xbox no longer being available it evens the playing field.  Two players makes the game a lot easier to manage and cuts down the game’s length since it isn’t rebalanced for multiple players.

Darkwatch is a highly competent shooter on a platform that strangely did not excel at the genre.  While it isn’t original its setting and solid gameplay more than make up for it to create a compelling adventure fans of the genre should seek out.