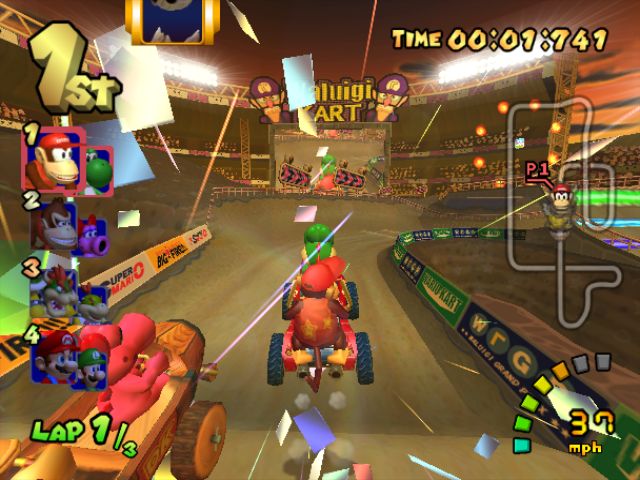 Mario Kart Double Dash is often looked on as the black sheep of the series as it introduced many new elements that were not fully embraced by the fans.  Let’s face it, innovating within the kart racing genre (or racing games in general) is damn near impossible as their mechanics are pretty well set.  Which is why it isn’t needed so long as the core mechanics are well done, which in the case of Double Dash fully applies.  Mario Kart Double Dash is an excellent racing game and one that is still fun even in light of superior games in the series.

The roster of characters has significantly expanded from 8 to 20 with plenty of new faces to the series.  Baby Mario and Luigi, Diddy Kong, Wario and Waluigi, Bowser Jr, Birdo, Daisy, and Toadette join the cast.  As big as the Mario universe is it seems kind of stupid that they would simply resort to chibi versions of the main cast to expand the playable roster.  Unfortunately many of these additions seem redundant although they do tie in with the game’s big new feature that of tag team kart racing.

The big new feature presented in DD are two man teams for every kart.  Players choose two characters, one for driving and one for using items that can be switched off at any time.  Depending on the pairing of characters you’ll have access to three different karts rated in three categories: speed, acceleration, and weight.  It’s isn’t as deep as you would expect as they generally fall into three groups; high top speed but low acceleration (heavy kart), fast acceleration but middling speed (light kart) and your typical average racer.  There’s no bonus from trying to match up Donkey Kong with Baby Mario for instance or other similar matchups which would have been cool.

The real interesting perk of character choice comes in item usage.  The list of items has nearly tripled since there character specific power-ups for everyone on the roster.  The Mario Brothers pick up a row of fireballs that bounce along the length of the track while Bowser has a gigantic turtle shell that is hard to avoid.  It’s fun to mix and match characters based on what items you’ll potentially have access to.  It also prompts you to take advantage of switching positions since both characters can hold one item but only the one riding Dutch can pick them up.

The track design is both interesting and more of the same.  There’s a nice mix of longer and shorter tracks that experiment with the number of laps.  A track such as Baby Park is a simple circle that lasts all of 30 seconds but is 7 laps long with a heavy emphasis on weapon usage to earn your position.  Mushroom City is reminiscent of Toad’s Turnpike except fully realized, with more traffic and multiple pathways to the exit.  But for every one of these there is a Dry Dry Desert that feels far too plain and more like rehash than something new.  There’s nothing inherently wrong that of course, but it swings from some wild extremes. All of the Special Cup tracks are excellent and will require plenty of practice before you’ll earn that gold cup.

The intolerable rubberband AI from Mario Kart 64 has been toned down significantly, if not outright removed.  That was the one element that ruined the single player mode of that game and now it’s satisfying to gain the lead and actually keep it using skill.  You’ll still have to deal with the fact that items weigh in favor of the ones in the lowest positions but I’ll gladly take that over artificial bullshit.  The improved handling also helps make the campaign more enjoyable.  The power slide is more integral to winning on the higher classes and the game does a good job of easing you into its use.

Battle mode has been the series biggest draw suffers from the same highs and lows as the single player.  Here the wealth of new items truly begins to shine with a few creative game modes like Bob Bomb Blast but the game is slowed down considerably to accommodate the smaller arenas.  Which is also the other let down, the arenas are completely lacking in exciting design and are mostly relegated to generic square boxes.  They could have done more with the system’s power to create some elaborate battlegrounds that could have added a strategic element.

In light of the insane amount of unlockables Super Smash Bros. Melee was packed with this installment of Mario Kart feels lacking in comparison.  After you’ve earned gold in the first three cups you’ll unlock the Special Cup, which houses four of the most difficult courses in the game.  Beyond that there are a few karts, characters, and battle mode tracks to earn.  Beyond 150cc class is Mirror Mode, which reverses the course layouts.  I’ve never been too big on mirrored tracks in racing games but will admit that for certain games it really does feel like a new set of tracks.  The most extensive end game addition is the All-Cup Tour.  This puts you in one long grand prix featuring all 16 tracks in the game, with all but the first and last tracks randomized.

The blurry textures and ugly rendered character sprites of Mario kart 64 have given way to a vibrant full 3d world that is absolutely beautiful to see in motion.  There’s a level of bustle and activity to each course that is pretty exciting to watch and at the time of its release there were no other games that could match its vivid color palette and sense of design.  It also ran at a perfect 60 frames per second in both single player and four player split screen mode, a technical feat to be sure.  There were some sacrifices made to achieve that level of performance; if you look closely you can see some average texture work and low poly count buildings and objects.  However when it all comes together those elements are easy to ignore.

The soundtrack is full of bright and cheery midi tunes that are adequate but not all that memorable.  It’s doubly disappointing considering Mario Kart 64 had numerous tracks that are all time favorites, and that was a cartridge game.  The one area of the game’s overall aural package that is annoying are the character voices, especially the baby characters.  It’s obvious they were going for cute but veered off into the irritating zone somewhere along the way.  At least there isn’t that much of it.

While most of its additions fall short of being worthwhile the fundamentals of Mario Kart Double Dash are still sound and make for a great kart racer.  There are some missed opportunities here and there, especially in regards to multiplayer as LAN support is no substitute for full online play but what can you do?