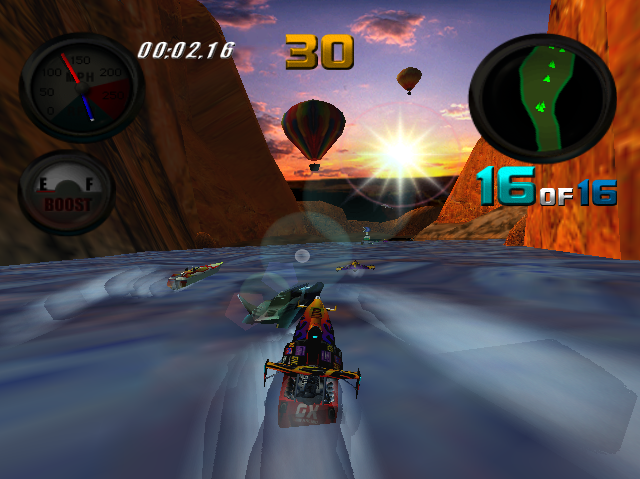 When Sega reentered the home console market with the Dreamcast no one knew what to expect.  After all the Saturn had a pretty miserable exit and its handling in the US left a bad taste in gamer’s mouths.  However the Dreamcast launch would go down in history as one of the most successful of all time due to a wide range of killer software.  One third party who offered up the strongest support was Midway, who had Mortal Kombat Gold, Ready to Rumble and the excellent Hydro Thunder available on launch day.  Hydro Thunder was not only one of the best launch games but an excellent game in general.

Remember the early prototypes of Wave Race 64?  That is basically what you are getting with Hydro Thunder.  Originally released in the arcade in 1998 Hydro Thunder was ported to the PlayStation and Nintendo 64 however this Dreamcast port would actually turn out the best.  Though missing some of the features of those versions (the career mode exclusive to the PS and the four player split screen of the N64) the stable frame rate and beautiful graphics more than make up for it.

The best way to sum up HT is Midway’s own San Francisco Rush except with speedboats.  Much like that game you’ll fight the other racers just as much as the “tracks” themselves as you jockey for position.  With few exceptions most races are only one lap meaning you only have a limited window to hustle up to first place.  Each individual track has loads of shortcuts and out of the way boost items to pick up and are massive in scope.  It’s entirely possible to go through each three or four times and still discover something new each go round which is an accomplishment in itself.

The gameplay is heavily focused around managing your boost and mastering this skill is absolutely crucial to success.  Boost is measured in seconds with blue granting 4 and red granting an incredible 9 seconds.  More than just for going faster the boost can be used for a variety of purposes.  You can catch some serious air (literally 5-6 seconds) if you hit a ramp at the right speed but more importantly at full speed your depending on how heavy your boat is you can send rival racers flying.  Hell you don’t even need to limit yourself to that, innocent passersby can also get it to and it’s hilarious to see a fully loaded cruise ship sent careening into the sky.  You do have to be careful as you can unwittingly knock your opponents ahead of you at the worst possible moments.

There is no career mode with the game instead broken down into tiers with steeper requirements needed for progression.  The easy courses offer 3 tracks and 3 simplified boats to choose from with your successful placement in the top three opening up the Medium difficulty.  Here the boats on offer are faster but have their own handling quirks and second place is needed to advance to Hard mode.  The boats available have some of the highest top speeds but are a bitch to control, presenting the toughest challenge yet.  If you can come in first (a tall order) the beyond awesome bonus tracks are yours to peruse.

The boats themselves come in a variety of shapes and sizes and all have their individual quirks.  The easy class are the easiest to handle but lack the top speed to compete at higher levels.  The medium boats offer a nice balance and with some expert driving can be used in any situation to eke out a win.  The Hard boats are the fastest but the most difficult to control; these courses almost require them and with the first place requirement to unlock the bonus tracks makes it a tough sell.

With thirteen tracks and almost as many boats to choose from there’s a ton of content waiting to be mined.  You won’t see all the game has to offer in a single weekend as the difficulty curve is pretty steep.  While you can get away with sloppy mistakes in the easy circuit having to place second and first on the higher settings is pretty rough.  I imagine most will have trouble finishing Arctic Circle in third place, and that’s one of the easy tracks.  There’s some light rubberbanding at play and while I’ve made my hatred of this gameplay “mechanic” in the past it isn’t so bad here.

Even today Hydro Thunder is an exceptionally pretty game with some of the best water physics and animation of the time.  There’s a diverse set of environments such as a San Diego Amusement Park, a trip through the submerged ruins of Atlantis and even an imaginary look at what New York would be if a disaster were to strike.  This inspired track will take you through the city streets, through subway tunnels and culminates near the collapsed ruins of the Statue of Liberty.  The frame rate is consistently higher than in the arcade and there are some added effects here and there even in split screen multiplayer which is also a treat.  The only hitch would be the plain interface and long load times you have to endure, sometimes as long as 10 seconds.

There’s a wealth of content to explore and more importantly the game is simply fun overall.  There have been many water based racing games in the years since Hydro Thunder’s release (even a sequel on X-Box Live Arcade) however the game still remains fun in the face of stiff competition.