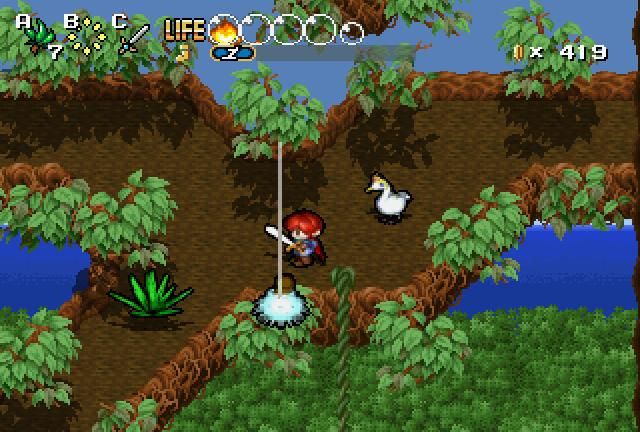 While I love the Shining Force strategy RPGs I have a love/hate relationship with the various attempts made at branching out of that genre.  Shining in the Darkness was a decent attempt at a dungeon crawler which would lead to the beyond awesome Shining the Holy Ark years later.  The Shining Soul games for GBA were decent for what they were and the less said about Shining Force Neo the better. “Hot stuff coming your way!” No, just no.  Years before those action RPGs Shining Wisdom took the series down the Zelda inspired route.  While it has some frustrating interface issues it still manages to be charming and entertaining overall.

Mars is the son of the legendary hero Sir Jiles, who saved the kingdom of Odegan once before.  Now that he has come of age Mars now has the opportunity to follow in his father’s lofty footsteps.  That chance comes very quickly as the dark elf Pazort has kidnapped the Princess Satera and plans on summoning a demon to destroy the world.  Through a series of unfortunate lies Mars ends up the only knight capable of stopping him.

The story takes place years after Shining Force 2 however this is not a direct sequel and only slightly references past events.  Unfortunately these story connections as well as other naming conventions had to be changed due to Sega refusing to allow Working Designs to use anything pertaining to localization of past games in the series.  It’s an odd decision to make but not one that affects the proceedings all that much.  Some of the character’s personalities were changed, most notably the characters Sarah and Kazin, which means nothing to those that can’t read Japanese; for “purists” the European version is closer as Sega handled that themselves.

As first impressions go Shining Wisdom does an exceptional job at dissuading you from continuing beyond the first hour.  The beginning of the game is excruciatingly slow as you are spend copious amounts of time wandering back and forth in a castle that is way too big for its own good.  The game soon picks up and consistently sends you to new locations to find equipment and items at a nice pace.  The cast of characters is actually pretty small however the story takes many turns and still manages to seem larger than it initially appears.

The similarities to Zelda can’t be denied.  It adapts the same overhead perspective and features many similar items although there are some differences.  The game’s dungeons and other locales do not follow the strict room by room structure of that game, instead opting for wide expanses that present the entire floor for you to explore.  The game is non-linear to an extent as you are only limited by the items needed to access new areas or delve further into dungeons.  That isn’t to say they don’t fall back on established tropes.  Most dungeons will have at least one new weapon that is necessary to complete it as well as simple block pushing puzzles and such.  Anyone who has played at least one entry in Nintendo’s series will be right at home here.

Since you are not gaining experience it is largely pointless to kill most enemies outside of the few random items they drop (gold, herbs, and life restoring bubbles).  Combat is actually frustrating since enemies respawn as soon as you move a few meters off screen and they can parry attacks, with no rhyme or reason as to how this is determined.  Having said that it is pretty fun to experiment later on in the game as you amass a large arsenal of weapons and items that can be combined with the various elemental orbs to create new attacks.

Shining Wisdom was originally designed for the Genesis before its last minute upgrade and it shows in its interface.   Despite the Saturn controller having six face and two shoulder buttons the game still only uses A,B, C for all of its actions, an obvious concession in case gamers did not own the Genesis six button controller.  All other buttons are simply used as secondary dash buttons.  It’s a stupid move as nearly all item use is relegated to the C button including basic attacks. As your inventory builds you’ll constantly swap items in rapid succession which gets old fast as there is a second or two of loading to leave the menu.  Even something as simple as using L+R to cycle through items would have gone a long way.

I’m not one to harp on a game’s graphics too much but it can’t be avoided: Shining Wisdom is an ugly game.  It wears its 16-bit origins a little too strongly and certainly pales in comparison to Magic Knight Rayearth, its closest relative released around the same time in Japan.  The rendered sprites are short and fat with a heavy black outline that does them no favors.   There are some pretty imaginative locations later in the game as well as a few epic boss battles but in the end this would only been a slightly above average Genesis game in terms of graphics.  The music on the other hand is generally fantastic and benefits from the Saturn’s better sound hardware.

While there was certainly more that could have been done to take advantage of the Saturn hardware Shining Wisdom manages to overcome its flaws and slow start to become an entertaining game overall.  The main quest is of medium length however there are numerous optional labyrinths and other hidden items to find.   In that time its story and gameplay will charm the hell out of you.