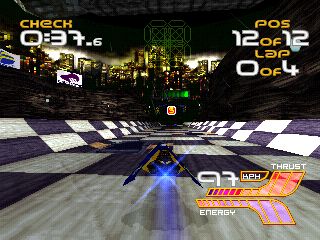 Wipeout was one of the early superstars of the PlayStation launch, earning Sony legitimacy as a platform holder and being one of the better titles available in spite of its difficulty.  The futuristic racing genre had not been firmly established yet and so alongside F-Zero Wipeout would come to define its mechanics.  While solid there was room for improvement, especially in the control and pacing department.  A year later Psygnosis would unleash Wipeout XL (Wipeout 2097 for you Brits), improving every single aspect established in the first game and creating what is still one of the best PlayStation racing titles to this day.

The same slick presentation that defined the original is even more polished as Designer’s Republic were once again brought on to handle the game’s front end menus, team logos, and weapons.  Nearly everything has been overhauled and given a sleeker appearance which is in line with the changes in gameplay in response to critic’s complaints.  Most of the weapons return but prove more satisfying to use as you can now permanently eliminate a racer from the competition.  May of the weapons now synonymous with the series such as the Quake Disruptor made their debut here.  One dubious addition is a sponsorship from Red Bull years before the drink would gain fame in the US.  Thankfully it is kept to the loading screens and the occasional billboard.

Set decades after the first game’s tournament the new AG racing league uses faster hovercars and a new antigravity propulsion system to better handle the increased speed.  What that means for gamers is a game that is much easier to control; the largest complaint lobbied against Wipeout was its unforgiving handling and steep learning curve.  The first issue is dealt with by using a turning system more in line with simulation racing games though not as strict.  By applying the air brake prior to sliding into a turn you’ll gradually ease into it and come out at full speed.  It’s tricky to get the hang of at first but once you do its highly rewarding.

The brutal difficulty has been lessened by improving the controls and also allowing you to tackle the game at your own pace.  There is no season mode, at least not at first.  Instead you can choose any of the first six tracks at your leisure and compete against 12 opponents for a gold medal.  The tracks are broken down into three classes: Vector, Venom, and Rapier which more or less correspond to easy, normal, and hard.  With no pressure to earn ranking in order to move on even novices can eventually stumble into first place if they try hard enough.

The pacing of each class is near perfect in my opinion with the top speed and number of laps rising in each.  There’s a simple track and a slightly more nuanced course to test your skill in each class.  I do think Psygnosis erred on the side of caution a bit too heavily as I was able to earn Gold medals after a little over an hour of screwing up.  The game is much more generous at providing the auto pilot item on every track eliminating the need to learn how to approach the toughest turns.  The Rapier class does prove the most difficult (at least initially) but even that boiled down to selecting the right craft.

Which isn’t to say there is no challenge; far from it.  After you’ve mastered all three classes Challenge Mode I is unlocked which pits you against Rapier class opponents in a full season with only three continues.  Only the very best will manage to ultimately triumph when your opponents are aggressive right from the start.  The truly skilled will have access to Challenge Mode II which grants access to the Phantom class tracks and the Piranha team, who have the fastest car in the game.  The game’s speed when played at the highest level is actually pretty frightening to see in motion.  If you manage to come out on top overall in Challenge II you are truly a god among men.

It’s hard to believe but in the space of a year Psygnosis were able to create a sequel so visually arresting that its predecessor seems date in comparison.  There’s a much greater sense of visual variety in each course with changing weather and uniquely themed sets.  This is a world that feels more alive than ever with passing trains, venting steam, and even wildlife flying by.  The lighting effects were beyond ridiculous for the time with each weapon lighting up the track as it passes by.  Even something as simple as the light trail behind each hovercar lends an ear to the idea that this is set in the distant future.  The slight draw-in is the only slight pox on an otherwise phenomenal visual package.

The award winning techno soundtrack returns with an all new selection of Euro hits to tap your feet to.  It isn’t all loud electronica with some ambient tracks thrown in the mix.  It matches the pace of the game perfectly and I say that as someone who isn’t a fan of the genre.

Wipeout XL was one of the highest rated games in the PlayStation library and it’s easy to see why. It remains the most accessible of the three released for the system and the one everyone looks back on fondly.  If it had two-player split screen rather than system link it would be perfect.  Guess you can’t have everything, heh.