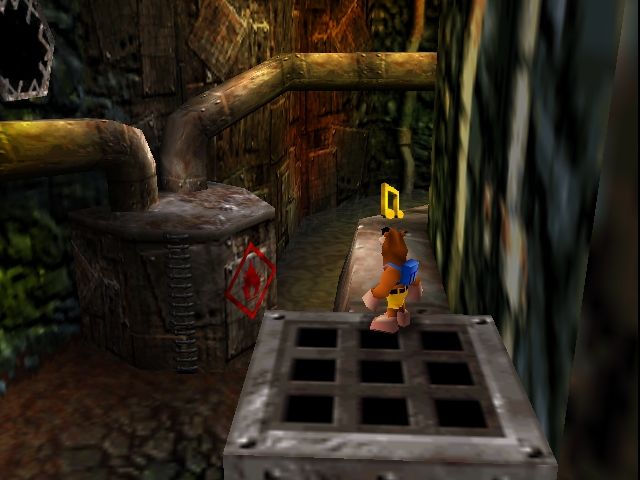 Once Super Mario 64 revolutionized the industry we all knew, it was only a matter of time until the clones came running.  And boy did they!  Collectathon 3d adventures replaced the generic 2d mascots of yesteryear and most were just as insipid as Bubsies, Zools, Awesome Possums, and every other furry animal you can imagine.  There’s nothing wrong with using the framework of a popular title so long as you put your own spin on it but they didn’t even bother going that far.  Who the hell remembers tripe like Jersey Devil or Croc?

Banjo Kazooie was announced along with Conker’s Quest in 1997 to some trepidation.  As dual platformers starring bright eyed animals they were criticized for ripping off Mario 64.  Both were delayed, with Conker undergoing a massive overhaul as an f-you to critics that actually worked.  Banjo Kazooie however stayed the course and was able to overcome its stigma as a copycat with fresh ideas and fun gameplay; it even betters Mario in many respects.  This is one of the strongest titles in the N64 library and an absolute must buy.

The evil witch Gruntilda wants to be the most beautiful in the land.  Unfortunately she learns of Tooty, Banjo’s sister who currently holds that title.  Not one for competition Gruntilda kidnaps Tooty while Banjo is sleeping, prompting him to mount a rescue with bird companion Kazooie in his backpack.

The similarities to Super Mario 64 simply can’t be denied as it is very clear Rare used that game as their template.  Banjo replaces the stars with jiggies (which are basically puzzle pieces) and coins with musical notes while also adding an assortment of other items to collect along the way.  Gruntilda’s lair acts as the hub world in much the same way Peach’s castle functions.  Both share similar themes for their levels although to be fair ice, fire, desert, etc. are simply universal video game staples.  You also don’t need to collect every jiggie in the game to reach its conclusion.

However there are just as many differences.  Although you primarily control Banjo Kazooie shares equal billing in the gameplay through the use of numerous abilities throughout the length of the game.  This team-up aspect is at the heart of the adventure and what really sets BK apart.   There’s a large selection of maneuvers that utilize either Banjo or Kazooie or sometimes both in different ways, from basic attacks to item usage.  The game’s control scheme makes use of nearly every button on the controller yet still feels intuitive.  The only control quirk that is annoying would be the camera’s tendency to move while aiming an egg shot.  Speaking of the camera you’re going to have to babysit and finesse it more than I would have liked although the addition of an auto facing button alleviates this somewhat.

There’s quite a collection of items to find and while I’m sure those that grew to hate Rare’s penchant for collectathon bullshit (I’m having nightmares of Donkey Kong 64 as we speak) are wincing they all serve a purpose and there is some restraint.  In every level are 10 jiggies gained through various means, some simply lying around while others will require a bit of thought to obtain or completion of a task.  Jiggies are used to fill in the missing pieces of each world’s painting to gain access, with each requiring more pieces.  There are 100 musical notes which are used to unlock new areas in Gruntilda’s lair.   Mumbo tokens are currency to pay for transformations.  Lastly the five jinjos are usually hard to find but will also cough up a jiggie once saved.  Any other items such as feathers and eggs are completely optional and if necessary in any parts the game will usually provide them.

Each of the nine worlds are designed in a nonlinear fashion so that you can collect the jiggies in any order you decide.  There’s so much to see and do that it is almost overwhelming as each world is simply bustling with activity.  No two jiggies are obtained the same way with variety being the name of the game. There’s a bit of everything in here, from straight platforming to action with loads of hidden areas to discover.  The various minigames are worthwhile diversions and not merely filler designed to pad out the game’s length with their added diversity being a welcome addition to the game.  The best aspect of collecting jiggies would be that you aren’t teleported out of the world upon collecting one; you are free to keep going.  And like Mario 64 if you become bored you can just as easily go visit some other stage.

To be honest the only annoying aspect of the game is accessing each level.  The paintings representing each level are not located in the same area as the world’s entrance outside of Mumbo’s Mountain.  You’ll spend just as much time finding each stage as you will collecting jiggies because the overworld is too damn big for its own good.  Whoever decided to place Freezeazy Peak toward the back of the damn hub (while its painting isn’t far off from the entrance) deserves to be shot.

Banjo Kazooie was a technical showpiece for the N64 in 1998 and is still fairly impressive even today.  Rare ditched the flat shaded polygonal look of Mario 64 for a fully textured mapped adventure, an area that the system didn’t necessarily excel do to hardware constraints.  However through some creative programming techniques Rare were able to overcome that.  Banjo Kazooie exhibits a level of texture design and variety that few games of that generation could match.  The animation is equally as brilliant in spite of Rare’s, uh, lack of creative character design.

Probably even more impressive than the seamless blending of textures is the games draw distance and frame rate.  Climb to the highest point in any given level and you can see the entirety of the map with no fog.  Seeing the whole island of Treasure Trove Cove with its numerous mountain peaks and various smaller beaches is simply magical.  The sizes of the maps are absolutely gargantuan which makes this even more impressive.  By having smaller objects such as notes and jiggies fade in as you approach they’ve managed to keep the frame rate high even in the most strenuous instances.  It’s a near perfect balance that was sadly tossed aside in its sequel for grandeur which caused the game to suffer.

The collection of tunes range from somber and moody to vibrant and happy depending on the situation as the music is dynamic, subtly blending from one track to the next.  For a cartridge title the number of instruments used in music is fairly complex, especially considering the large number of sound effects the game also employs.  Nearly every individual character, from the random NPCs down to the jiggies and items you collect has their own unique “voice” in a Charlie Brown style manner.  Considering the length of the adventure it’s a wonder that they were able to make them all distinct.

Banjo Kazooie is one of the best N64 games of all time and one that is still worth tracking down even today.  Whether it’s the cartridge or its enhanced re-release on Xbox Live fans of platformers would do well to track down one of the genre’s greatest entrants.