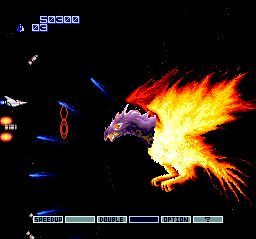 Of all the publisher’s that supported the PC Engine CD in Japan Konami was the most surprising.  Even though their output was sparse their PC Engine efforts were simply incredible but sadly stayed in Japan, which sucks as they were one of the few developers that really made that hardware sing.  Dracula X – Rondo of Blood is quite possibly the best overall game in the series and you could make a strong case for best overall PC Engine game.  Snatcher was the first enhanced port of the PC-88 original and served as the basis for the Sega CD port.  Which brings us to the phenomenal port of Gradius II we never received.  Had the Turbo CD performed better in the US (or maybe just in general) there’s no doubt in my mind someone would have brought it over as the system was a haven for shooters.  As is it’s easily one of the best on a platform that isn’t suffering from a shortage.

It has to be said that the graphics in this port are truly outstanding and compare favorably to the coin op.  The gratuitous opening launch sequence sets the tone as this is nearly identical to the arcade outside of the difference in resolution.  Gradius II was visually spectacular for its time and to see all of its graphical splendor recreated at home is still amazing even today.  The opening level with its massive flaming suns that spawn fiery dragons is still creatively incredible to this day.  The numerous bosses that made their debut here would go on to make repeat appearances in nearly every iteration of the series from this point onward.  Even the soundtrack has made it over intact but now in redbook audio thanks to the magic of CDs.

There are many flourishes that the Famicom simply couldn’t handle but the one aspect both versions share is slowdown.  Though it isn’t anywhere near as bad it does pop up here and there, primarily when you have four options and are in a zone with many destructible elements such as the Crystal World.  On a few bosses that produce heavy weapons fire it does start to crawl however it’s a far cry from the perpetual slow motion of the Famicom version.

Though this is the sequel to Gradius it borrows liberally from the Salamander series and MSX Nemesis in terms of weapons.  Of the four available weapon configurations two taken are straight from that game.  The popular Ripple laser and two-way missiles make the fourth option the all-around best choice but I’ll admit sometimes I go with number three because I like the Photon Torpedoes.  The standard Gradius laser and missiles just seem so plain in comparison.  The beyond awesome Force Shield makes an appearance and anyone without a hole in their head would do well to pick it immediately.

The arcade’s levels and stage progression have been recreated perfectly which is a bonus for the lucky fans that played the coin op.  I will say that although the Famicom game moved the levels around and even ditched a few in favor of new ones it flowed pretty well and the new levels were actually well done.  You only get one new stage here, a trip through a decaying temple partially submerged in the desert.  It kind of resembles a mix of the sand desert of Gradius III crossed with the Egyptian themed level of Lifeforce.  It is perhaps the one level where the stupid double shot actually shines due to the sheer number of enemies on the ceiling.

The difficulty has been toned down from the brutal coin op but the game still puts up a worthy challenge.  It’s tempting to grab four options for maximum firepower as soon as possible however between the four options trailing your ship and their own fire it’s very easy to lose track and fly into a wall or bullets.  Speaking of bullets although it doesn’t approach the insanity of its arcade brethren the screen can still become pretty cluttered at times. It’s possibly one of the few times where the excessive slowdown of the Famicom game was a help and not a hindrance, especially since you could actually initiate it on your own.

One change that was actually a benefit to gamers was continuing.  Plunking another quarter in the machine would start you off at the closest checkpoint which sounds convenient but also meant you were dropped into a warzone with no power-ups.  Here you start at the beginning of the level which is much better.  Weird I know.

Gradius II is one of my favorite shooters for the Turbo CD, ahead of the Star Soldier series and on the same level as Blazing Lazers.  It’s a damn shame that it was never officially released here until its Virtual Console release a few years ago but it doesn’t matter.  It’s a shooter, what little text is in English anyway meaning you can import if it’s cheaper with no setbacks.