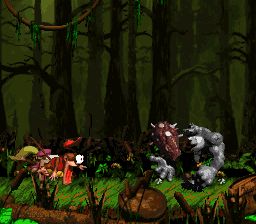 Donkey Kong Country hit the industry with a level of hype not seen since the release of Sonic the Hedgehog and Super Mario Brothers 3.  With its revival of a long forgotten gaming icon, tight gameplay, arresting visuals, and oh yeah, the insane graphics no one was prepared and it became a monster hit.  And while it is an excellent platformer it was definitely overrated at the time with many perfect scores.  Donkey Kong Country 2 however really is that good.  With more of everything that made its predecessor a hit except more refined it is the game that signified in my eyes Rare’s status as a top tier developer.  In the era where the 2d platformer ruled DKC 2 is still easily one of the best games of the 16-bit era.

After the defeat of King K. Rool Donkey Kong settles down to enjoy his recovered banana hoard but is kidnapped by the returning King, now going by the name Kaptain K. Rool to go along with his pirate attire.  Diddy Kong is joined by girlfriend Dixie and an expanded Kong family to mount a rescue from the now pirate themed Kremlings.

You might be fooled into thinking both kongs are identical since their physical characteristics are similar however Rare has done a great job of differentiating the two.  Using her ponytail Dixie can float by spinning and also use it to pick up and carry objects.  Diddy is more adept at taking out enemies with his cartwheel plus he holds his barrels in front of himself, useful for head on collisions.  He gets extra range on his jumps by tumbling off a platform first.  There are a few team up moves you can pull off such as piggy backing on your partner or using them as a projectile.  Since they’re both small the larger Kremlings still pose a threat, a nice little touch.

The list of additions is simply staggering with many more items to collect (all with a purpose), secret areas to find, and just more of everything in general.  Aside from the standard bananas and balloons for extra lives there are banana coins which function as currency around the island.  The various members of the Kong family offer many services at a cost; Funky Kong will allow you to revisit prior worlds, Wrinkly Kong gives basic tips about the game and saves, Swanky Kong hosts a game show where you can earn extra lives, and finally Cranky Kong offers cryptic clues on the whereabouts of the rare DK coins.

The Kremcoins found in the bonus areas are used to access the Lost World, the DK equivalent of Super Mario World’s Star Road.  These 5 levels are some of the toughest in the game and have the steepest requirements to access.  You’ll need to find all seventy five Kremcoins in the game (15 per level essentially) which is a task in itself.  Aside from the satisfaction of knowing you’re a truly great player to have done so you’ll also get the best ending if you can muster the skill needed to reach the true final boss and the best ending.

The main game has a pretty steep learning curve that I feel is near perfect.  It is assumed that you are familiar with the series (and the mechanics are simple enough anyway) and so the game throws you into the deep end and never lets up.  When comparing the two games Donkey Kong Country is definitely where Rare sort of established the series play mechanics but were careful not to push too far.  Here every so often a level such as Bramble Blast and Red Hot Ride are thrown in to keep you from settling into a rhythm.  Even the terribly boring boss battles of the first game have been overhauled.  Where they seemed to be included simply as a matter of course DKC2’s mayors constantly evolve in their attack patterns throughout each fight making them a worthwhile part of the game.

The pirate setting may seem limiting but it in fact has given the game far more variety than most platformers combined.  Each locale is its own separate themed world with very few themes repeated throughout the length of the game and even so there are significant changes to make them feel fresh.  Glimmer’s Galleon which you must navigate using only the light provided by Glimmer’s proboscis is wholly separate from Lava Lagoon, where Clapper the Seal must cool down the water for short periods in order for you to progress.  Amazingly the game keeps up this level of variety right up to its climax with new mechanics introduced at every turn.  Even the signature barrel blasting sees new life with the addition of new barrels.  Steerable barrels allow you free movement while inside for a limited time, while rotatable barrels allow you to choose your firing direction, once again within a limit.  My personal favorite are the plus and minus barrels which are only used a few times but each is memorable. In the Haunted Hall you must hit these barrels to increase (or if you aren’t careful, decrease) the amount of time you are invincible lest Kackles the ghost catches you.

It’s almost overwhelming just how many secrets are hidden throughout the game.  I honestly doubt most will ever complete the game 100% without the use of a guide.  The best kept secrets will require you to pay close attention to the environment for hooks or barrels slightly off screen or cleverly blended into the background.  The expanded number of animal companions also play a large role locating the game’s most well hidden trinkets.

It’s hard to believe that in the span of a year Rare were able to surpass their work on the original Donkey Kong Country but it’s true.  The more consistent theme and varied worlds produce a visual feast for the eyes that I feel is superior to its predecessor.  Crocodile Island is darker and moodier than the cheery jungles of the first game and host to a larger assortment of wonderfully designed creatures even in spite of Rare’s sometimes questionable art.  The multilayered backgrounds host a ridiculous amount of detail for a 16-bit title with some of the best character animation from that generation.  There are very few SNES games, let alone 16-bit titles that are in the same league.

The game’s orchestral soundtrack is some of the finest music produced for the SNES.  The soundtrack for DKC was largely tropical themed but that would be inappropriate tonally with this game’s setting.  The music is moodier and tense but can swing back to joyous and upbeat when necessary.  There are more instances where the music will fade to put the sound effects in focus and it works wonderfully.  Even the comical sound effects are a perfect match for the music.

Nothing more needs to be said.  Donkey Kong Country 2 is possibly Rare’s finest hour and certainly one of the best platformers ever made.  There’s no higher praise than that.