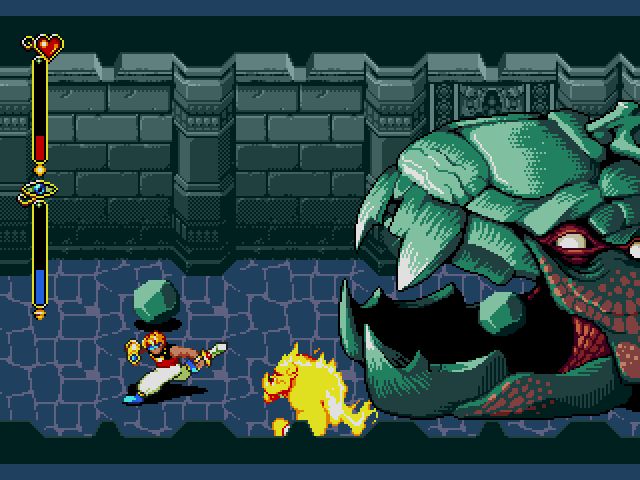 It was a well-known fact during the 16-bit era that if you were into RPGs the SNES was the system to own.  With the likes of Square and Enix dedicating their entire output to the console the SNES was graced with some of the most legendary RPGs, no, games period, of all time.  In their absence Sega were forced to supply Genesis owners with their own home grown efforts and I must say they did them proud.  The Phantasy Star and Shining Force series were true classics and in 1995 Yuzo Koshiro and Ancient studios would grace the system with Beyond Oasis.

Prince Ali of the kingdom of Oasis spends his free time treasure hunting rather than staying cooped up in a castle.  One such expedition yields the golden armlet, an artifact that belonged to a wizard who used it to protect the world from the owner of the silver armlet.  Now that both armlets have been awakened it is only a matter of time before the two will come in conflict again.

Calling Beyond Oasis an action RPG is a slight disservice.  While it has stats it completely eschews typical RPG conventions such as experience points and leveling up.  Your hit points increase by collecting hearts dropped by random enemies and food is used to restore your health and magic.  You don’t collect any kind of currency, negating the need for shops of any kind.  All of your equipment is found out in the field and dungeons.

This might be light on the RPG aspect but it’s heavy on the action.  Beyond Oasis has more in common with Streets of Rage as Ali is graced with a large arsenal of combat techniques executed fighting game style.  This is fitting as Ancient are also responsible for that series.  The various battle techniques keep the combat from becoming stale throughout the course of the adventure.  Ali is a nimble protagonist but some of his movements like jumping take some getting used to.  If you have a six button controller the controls become even more fluid since certain actions will now have their own dedicated button.

You’ll lean on certain techniques such as the dashing slash since Ali is equipped with a little dagger by default.  There are a large number of secondary weapons you can stash for later use but these degrade and disappear after a set number of uses.   Outside of a few hidden weapons the dagger is the only weapon you have that will never break.  It’s a bold move to force you to rely on an item with such short range but the expansive battle system is successful at shoring up its weaknesses.

The primary thrust of your various adventures around Oasis is to find the four elemental spirits used to defeat the Silver Armlet in the past.  The 4 spirits are probably BO’s most well-known gameplay element and each is equipped with a variety of spells to help you as you solve puzzles and fight enemies.  The four elementals, Dytto of water, Efreet of fire, Shade of Darkness, and Bow of Earth are summoned by blasting a part of the environment endemic to their element once collected.  So long as you’re magic doesn’t run out they will follow you and assist in attacking enemies.

That isn’t why you’ll keep them out however. Aside from using their powers in the typical ways you’d expect (extinguishing fire with water, lighting torches, etc.) they also have other benefits as well.  Dytto can heal you, Shade acts as an extra layer of armor as well as saving you from pits.  Efreet will aggressively attack any enemies that come to close to you while Bow…..actually sees the least amount of use since he can’t move far from where he has sprouted without teleporting first.  The gems collected throughout the game increase their power and reduce how fast they drain your magic meter, handy as later dungeons will require numerous spirit swaps for progression.

Beyond Oasis is an absolutely beautiful game, with a level of detail and art direction not many games from that era can match.  Despite the top down view the stunning animation still manages to stand out.  Every sprite is larger than in most similar games and the bosses are a true sight to behold.   There’s a level of vibrancy to the game’s graphics not common on the Genesis, with the game almost resembling an SNES title at times in terms of color.  If there is a downside to the presentation it would be the soundtrack; while it isn’t terrible it’s so ambient that you’ll barely remember any of it, a far cry from Yuzo Koshiro’s other works with this sound chip.

The stellar presentation comes at a price however in the game’s length.  Whether you’re a novice gamer or a video game wizard Beyond Oasis will last a scant 5-6 hours at most before the credits roll.  Since the game is light on story you’ll spend most of your time in dungeons and the puzzles aren’t so complex that you’ll need to consult a strategy guide to progress.  There are tons of hidden rooms that will lead to extra power-up jewels as well as infinite weapons for those willing to seek them out and extend the life of the game.  These challenges probably make more use of your Spirits than the main story dungeons so for those who want to maximize their use the extra content is worth it.

There are very few action RPGs available for the Genesis and Beyond Oasis is probably in the top 3.  Had the game been double the length this would have been an absolute classic but will have to settle for exceptional.