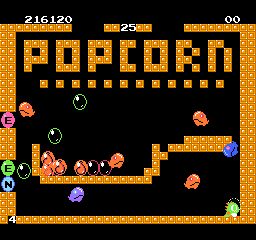 With the advent of games like Pitfall and Super Mario Brothers the days of the single screen platformer were numbered.  Popular at a point in time where consoles and arcade hardware were not equipped to handle scrolling backgrounds 1985 marked a turning point for the genre.  However even in spite of the brilliance of the previously mentioned games developers were able to find new ways to spark interest in what was once a staple of the industry.  Bubble Bobble from Taito would go on to become a phenomenon and it’s easy to see why with its pick up and play gameplay and hidden depth.  As a simple game it was ported to every format known to man but it is the NES version that I have a fondness for, and time has not diluted that one bit.

As either Bub or Bob your main weapons are the multi-functional bubbles you can blow.  Bubbles can be used to trap enemies at which point a mean head butt using your head spikes will send them flying.  Technically you can blow as many bubbles as you want but after eight or so the earliest ones will disappear.  Aside from offense you can also use a bubble as a stepping stone, bouncing on it to reach higher platforms.  This technique becomes mandatory in the second half of the game when elevated ledges become scarce.

There are a ton of special items that appear either randomly or on set levels when needed.  Special bubbles come with three elemental properties: water, lightning and fire.  Water bubbles release a stream of water that will suck in any enemies caught in its flow and defeat them, producing crystals worth massive points.  As a bonus you can get swept in and become an invincible death dealing dino!  Fire drops a single flame that will engulf the area in touches.  While you won’t die from stepping in it it does slow your movements.  The lightning bubble is the most frequent and the trickiest to time.  Popping one will send a bolt of lightning in the opposite direction you are facing.  This bubble is used to defeat the game’s lone boss so practice makes perfect.

All defeated enemies will spawn fruit (or other condiments) for points or other items that will enhance you in some way.  Food gives points which will net extra lives at set intervals.  There are numerous criteria that cause certain fruit to spawn such as the number of enemies you pop simultaneously to the order in which you do so.  They are also tied in to your score, with the type dependent on the number your score ends in.  While there are unlimited continues and passwords to save progress no one likes to start from square one so racking up extra lives by any means is the way to go.

There are a ton of items that produce a variety of effects in addition to food.  The different flavors of bubble gum will enhance your bubbles to fly farther or shoot faster.  Shoes (a dinosaur with shoes!) boost your walking speed which isn’t always a boon.  The necklaces will cause E-X-T-E-N-D bubbles to appear which award an extra life once spelled out.  The most important is the umbrella, which will skip you up to 5 levels ahead.  If it shows up do everything in your power to get it!  A sizable amount of items were removed in the transition from the arcade but there’s more than enough in the game that they aren’t missed.

As compensation the NES version has 12 additional levels for a grand total of 112.  There’s a steady progression in terms of technique needed to trap and defeat all of the enemies on each level.  The first 10 levels or so are relatively straightforward and introduce most of the enemies you’ll be dealing with, their patterns of movement and attacks if any.  Soon enough you’ll need to use your bubbles as mobile platforms to reach them or contend with environmental factors such as shifts in gravity that will affect your movement or the behavior of your bubbles.  All of this while trying to beat the invisible timer which will spawn the Bubble Bobble equivalent of the grim reaper and send every remaining enemy into overdrive.

When examining the level design it’s amazing how the addition of a single platform or element can radically shift your approach.  As an example, round 58 places all of the enemies at the top of the screen, forcing you to build a tower of bubbles to reach them.  However your bubbles are pulled toward the middle of the screen and you have to contend with invaders who drop missiles from above.  Even the type of enemies that populate the levels will cause you to change tactics.  Over 100 levels of bubble blowing action has the misfortune of becoming repetitive however the game does a good job of throwing something new in the mix at regular intervals.  Plus each round is only a minute or two long.

Aside from requiring two-players to beat the final boss to see the true ending Bubble Bobble is an NES classic deserving of that status.  Time has done nothing to tarnish the gameplay and it remains just as enjoyable today as it was back then.