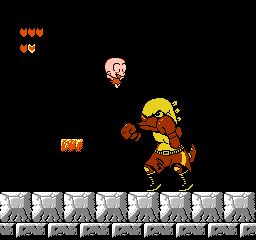 Like Mario and Nintendo Bonk was the closest the Turbo Grafx-16 ever came to having an official mascot.  While Bonk’s Adventure wasn’t the pack-in title it was the one of the first games to garner the system widespread attention.  His judiciously large noggin was also heavily used in ads trying to sell the system.  But by the end of 1993 the platform was all but dead in the US.  Hudson Soft saw an opportunity to introduce the character to a wider audience and ported it to the NES in late 1993.

The question is why?  Not that Bonk’s Adventure was a terrible game but it did have some flaws that were corrected in the amazing Bonk’s Revenge.  Though the good will that game mustered was squandered with the uninspired Bonk 3 I think a completely original game tailored for the NES would have been a better fit rather than a port of a game released in 1989.  The NES market had completely dried up by 1992 with 16-bit in full swing leaving this port ill timed.  All things considered it is good for what it is but isn’t even in the same galaxy as something like Kirby’s Adventure.

Taking into account the technological gap between the two platforms this version of Bonk’s Adventure holds up surprisingly well.  The simple art style of the original release is a perfect match for the NES’s technical constraints.  Though slightly smaller all of the character and enemy sprites are just as expressive and as a bonus Bonk is sporting his redrawn look from the sequel.  The one area that has taken the biggest hit would be the overall color palette.  16 colors max is no comparison to over 400 but Hudson has done a pretty good job compensating.

Bonk’s main method of attack is his massive head which can be used to bonk enemies, smack projectiles and even juggle enemies for more points.  While it is effective it’s better to dive bomb them like a missile which will also propel you in the air for repeat attacks.  In the Turbo version Bonk had some measure of control while airborne by spinning which was easy due to the turbo option.  Here you’ll wear out your thumb trying to perform the same maneuver so thankfully it’s rarely ever necessary.

The hit detection is still just as screwy and presents problems on numerous occasions, most specifically during boss battles.  Each boss has a very particular hit box and while the first few are easy enough to hit later ones such as the demon tank are a nightmare to target.  It isn’t always obvious how long there period of invincibility will last and so you’ll take many cheap shots as a result.  There are some standard enemies that seem to possess much longer range than it would seem as I took damage no matter how early I initiated my attack. It’s very uneven and something you’ll eventually adapt to but it should have been fixed.

All five levels have been recreated for the most part but shortened.  Bonk’s Adventure wasn’t the longest title on the market and this version almost feels like a guided tour of it.  Every level is broken up into multiple segments but some have been removed and the level order shuffled around.  Stage four in particular suffers the most as it is one straight path to the end.  While not at the same level as a Mario or Sonic Bonk was a varied adventure but you’ll only get brief snippets of that here.

The game is incredibly easy, far easier than its big brother.  With less enemies on screen you’ll spend large amounts of time alone exploring the barren environments.  Food and flowers that took to you the bonus games were in abundance but have been scaled back considerably.  The game is far too generous with meat with chunks available at every turn turning an already simplified adventure into a cakewalk.  Even with the bad hit detection I was able to zerg rush the bosses, especially since you awaken right where you left off after death.  I can’t see anyone having difficulty completing the game in less than an hour.

Bonk’s Adventure was a decent title in 1989 but better platformers were available for every console in the years following its release.  In light of stiffer competition it can’t compete, especially as it is one of the most expensive games on the market due to a limited print run.  It’s admirable that they were able to bring most of what made the game good over to the NES but it simply isn’t enough.  Trust me this is not worth the hundreds of dollars it sells for used or brand new.