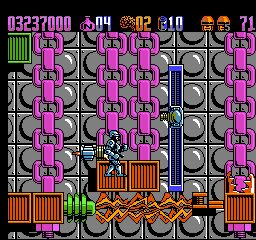 Licensed video games going as far back as ET have been terrible regardless of the quality of the product they are based on.  Movie licensed games in particular it seems have a 90% chance to suck especially if the source material is bad.  Robocop 2 falls in this category; the movie was so bad even the actors didn’t enjoy working on it.  While the first game wasn’t a video game classic by any means it at least made an attempt to incorporate many of Robocop’s unique facets into a game.  They succeeded and failed and the game was ultimately above average.  Robocop 2 ditches that and becomes a standard platformer of the era except its design fails in that regard.

Right off the bat you’ll notice Robocop is far more nimble than he realistically should be.  The lumbering pace of the original is gone leaving a Murphy who zips along as if he has roller skates soldered to his feet.  To go along with his newfound agility he can also jump (not very well but it’s something).  That right there introduces a radical shift in gameplay as the prior game was designed around using your limited energy/power to reach the end of each stage in spite of your slow gait.  With the power to leap comes a heavier emphasis on navigating platforms, a move that ultimately dooms the game in the end.

Rather than a straight left to right jaunt to the end of each level the game loosely mirrors the movie’s plot and is mission based.  You must collect 60% of the Nitro ruining the streets as well as apprehend 60% of the criminals of each level.  I use the term apprehend loosely; most of the time they’ll walk right up to you and you’ll have to resist shooting them.  Other times these “criminals” are actually people in distress.  I guess the design team was too lazy to create another end level graphic.  Failure to complete either objective will send you to a shooting range where you’re given two chances to pass otherwise its back to the beginning of the prior level.

I can’t believe I spent enough time playing the game to get this good.  I feel ashamed.

Catching crooks is easy enough but for the first half of the game it’s nearly impossible to collect enough Nuke to earn a passing grade without finding the hidden areas in each stage.  Of course there’s no indication or even a hint as to where they are; they are literally anywhere.  My second time through the third level I accidently missed a jump and fell into what I thought was sewage but turned out to be the entrance to an underground bunker.  Now if I had not stumbled across this by accident I would never have found enough Nuke.  Hell if the game even gave you some indication as to how much Nuke is needed to pass I might have been able to forgive its shortcomings in this area.

The level design leans heavily on your new leaping prowess and this is where the game fails the hardest.  Robocop controls like a brick in the air, which he should I guess, but the game’s physics and controls aren’t up to the task of navigating the many floating platforms you’ll encounter, especially in the last third of the game.  Robocop’s momentum is screwed up due to his seemingly permanent ice skates so it’s difficult to judge how far you’ll actually fly once airborne.  Near the end of the game you’ll have to execute a series of near pinpoint accurate platforming in rapid succession with no margin for error and the controls simply aren’t up to the task.  The game even has the nerve to throw in sequences where your controls are reversed, making an already laborious task that much harder.

And another thing, what the hell is up with Robocop dying anytime he comes in contact with almost any other metal object?  Riding a floating platform and come in contact with another?  Death.  Slightly graze any of the various metal contraptions and its back to the beginning of the level since there are no checkpoints.  Who thought this was a good idea?  It makes no god damn sense whatsoever and only makes an already frustrating game that much harder.  Imagine if Robocop blew up every time he tried getting in his police cruiser in the movie……..that would actually be pretty funny but you get my point.

The limited NES color palette was used surprisingly well to convey the decaying and corrupt streets of Detroit in the original game.  That has all gone out the window as it seems a mad clown was let loose on the city and spray painted everything in bright pastel colors.  The game’s overall color scheme is gaudy and a drastic mismatch with the tone the game is aiming for.  There’s an obvious increase in detail over the first game but the background tiles are reused three or four times in a row with a slight change in palette being the only difference.

Robocop 2 is just as bad as the movie and maybe even worse since you’re the one controlling it.  If you have any common sense you’ll avoid the game just like audiences should have avoided the movie.