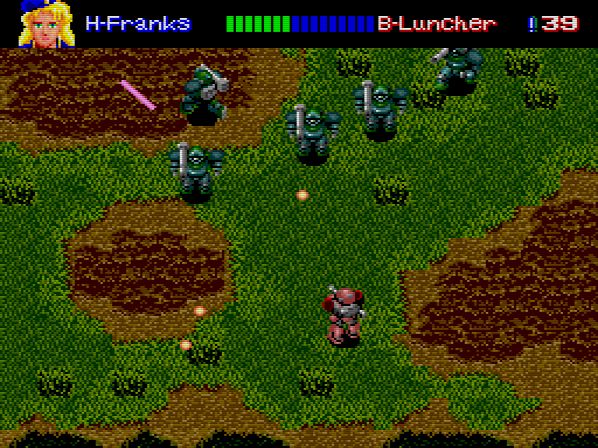 It really is a shame that the Turbo Grafx-16 and its CD add-on never achieved the level of success it deserved.  Now I’m not saying that the US library was in anyway comparable to the Genesis or SNES but it deserved better, especially from its parent company.  If even a fraction of the games released in japan came to the US the system wouldn’t be so obscure.

As is there are large gaps in its library, most prominently the side scrolling action genre.  While shmups were in ready supply gamers in the US were left with tripe such as Shockman and this travesty, Final Zone II.  This average title would normally be forgotten in history however it lives on in infamy due to its legendary English dub, one of the worst atrocities known to man.

Captain Bowie and his squadron of commandos are preparing to quell a rebellion on a remote island from space but are attacked first, leaving a hole in the hull of their ship.  Nearly everyone dies aside from a few who were lucky enough to be in their NAPS suits.  Picking up the pieces it’s up to Bowie and his comrades to piece together who is orchestrating events to try and kill him.

The story is a confusing mess that isn’t told very well despite the abundance of cut scenes.  Since the first game never saw release in America the ties between the two games are lost on us.  Even in spite of all this you can’t say they didn’t try.  There are an extensive number of cinemas in the game that, while badly animated (if at all) and lacking any context can at least be considered a reward, although not the way the developers intended.

It’s no exaggeration to say that Final Zone II has one of the top ten worst English dubs ever recorded, up there with Resident Evil and Deep Fear.  It’s apparent the cast were given no direction as there is absolutely no emotion in any of the line readings; it seems more concern was given to enunciating the words rather than emoting.  The game’s script doesn’t help of course but that is only a small part of the problem.  In addition to the lack of care in any of the performances the mouth flaps don’t match the dialogue and is worse than in any Kung Fu movie I’ve ever seen.  It isn’t all bad on the sound front however as the soundtrack is actually pretty nice but it doesn’t save the game aurally.

The game itself abandons the ill-conceived squad tactics of its predecessor for straightforward top down shooting action.  Regardless of the character chosen each moves pretty fast and can fire in eight directions.  Unlike most action games your weapons are actually fired from each arm with your main gun coming from the left side.  It’s weird and takes some getting used to as your bullets come from off center.  The few power-ups will extend your life bar, refill health or replenish your secondary ammo.  The game is fairly balanced in that these will usually appear at just the right time.

Although their general mechanics are the same what separates each member are their selection of weapons.  Everyone has a primary armament that has unlimited ammo and a secondary that is more powerful but limited.  There are pretty major differences between characters with Hansen’s spread gun working well at clearing groups but lacking range, Hannah’s’ unlimited range laser, and Velder’s short range light saber.

For the first half you are stuck controlling a given character in each stage but the second half allows you to choose from at two.  There is some strategy to choosing the right hero for a given mission but to be honest with a little bit of skill you can use anyone.  Enemies tend to attack in groups for the most part although certain stages do vary it up somewhat.  While it is typical of the genre the lack of enemy variety really becomes grating within short order.  It isn’t until the games latter half that new enemies are introduced at which point these are repeated for a few more stages.  The final level takes a weird turn into sci-fi territory which does vary it up a bit although it comes out of left field.

From all accounts issuing commands and trying to coordinate your team members in the first game was a nightmare so excising those elements makes for a more solid product.  However if they could have corrected the flaws in the system it would have really helped the game stand out because as is it is a typical run of the mill shooter.  Competent, but not very exciting.  The only detour in gameplay comes in stage three which is a forward scrolling helicopter chase.

With a little more variety in its gameplay this could have risen above its average status.  What’s here is serviceable but not something you’ll go out of your way to track down unless you want to experience its bad voice acting firsthand.  And we have youtube for that.