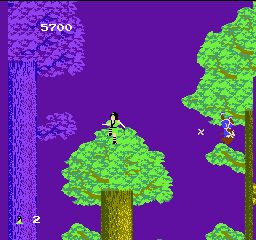 Remember those old ninja movies from the 80s?  Or if you’re part of the younger set Crouching Tiger, Hidden Dragon?  Remember how awesome it looked when the ninjas were flying through the tree tops like magic?  Of course back then I was stupid and thought ninjas were real my point still stands.  Ninjas were the epitome of everything cool for a brief period in the mid to late 80s and many games tried to capitalize on that fact.  Legend of Kage attempted to bring some of the high flying action of those old films to video games and manages to both succeed and fail at the same time.

Kage is on a mission to rescue the Princess Kiri from an evil shogun and his minions. As far as intros go Legend of Kage probably beats Double Dragon as the most awesomely bad.  As if your girlfriend getting punched in the gut and carried away like a caveman wasn’t bad, here the Princess is snatched from your arms by a ninja who probably laughed his ass off while doing so.  That’s like the most bad ass dinner party story ever in my book.

While Legend of Kage manages to replicate the feel of being a slick ninja bounding from tree to tree it has little else going for it.  Originally released in the arcade in 1985 it was ported to nearly every format imaginable.  The NES port came to the US in 1987, at which point we were getting Kid Icarus, Mega Man (god that box art), Castlevania, and the Legend of Zelda.  The simplistic gameplay and brevity of Legend of Kage simply didn’t cut it against those heavyweights.

Kage is equipped with throwing stars and a kodachi for close ranged attacks.   The short sword also doubles as a defensive mechanism as it can block some projectiles and also parry melee attacks if timed right. The few power-ups available are a crystal ball that alters your attack strength or speed, noted by a change in clothes.  It’s an important distinction since you die in a single hit without the crystal ball.  The only other weapon is a scroll that allows you to meditate and kill everything on screen for about 10 seconds.  You have the ability to leap great distances like most ninjas and it’s during the brief moments where you can fly about that you can experience some joy while playing the game.

And that’s about the extent of it.  Legend of Kage has only 4 levels that are only a minute or two long.  At least it offers some variety.  The journey will take you from the forest surrounding the shogun’s castle, to the moat, scaling the castle walls and the inside of the fortress.  Each level has a different objective, such as slaying 10 ninjas in the moat, or reaching the top of the castle alive but it does little to stave away the games brevity.

After you save the Princess the game basically resets and she is taken again.  In the arcade you had to clear the game twice to fight the final boss but in this port it was increased to 3, a lame attempt to wring more life out of the game.  The only differences in each run through are the changing seasons and 1 or 2 new enemies.   Even in spite of this the game can be finished in as little as 15 minutes, and considering its lack of depth the question then becomes why should you?

As a port the NES version is as faithful a rendition as you can expect.  But as a game Legend of Kage falls short.  This certainly isn’t a legend, it’s more like a short story.