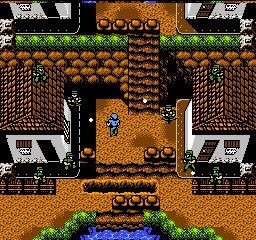 Sometimes I wonder where Japanese developers get their inspiration to create certain games.  The NES era was full of downright strange games such as Square’s Adventures of Tom Sawyer and Columbus.  Most of the weirder stuff was left behind in Japan, usually for obvious reasons but there were a few fairly inconspicuous releases that were changed to protect our innocent American eyes during localization.  At first glance Guerrilla War might seem like a standard military themed action game when in reality it is based on the exploits of revolutionary Che Guevara (in fact the game was called Guevara in Japan).

Guerrilla War tells the story of the overthrowing of Fulgencio Batista, Cuban dictator of the 1950s. According to this game Guevara and his gun toting buddy Fidel Castro cut a bloody swath through the jungles of Cuba on their way to Batista’s stronghold where all is well that ends well as you free the people.  Now of course the game doesn’t tell you all this implicitly as all references to such have been changed but there are enough references left in the game that you can easily put two and two together.

Strange subject matter aside it doesn’t take away from the fact that Guerrilla War is one of the best pure action titles for the NES, if not the most intense.  The opening moments of the game throw 5 enemy soldiers at you at once and the game rarely lets up from there.  The best way to describe Guerrilla War is Ikari Warriors done right.  Guerrilla War shares many of the same features but unlike that game doesn’t suck.

The list of weaponry is actually fairly small for a game of this type but makes up for it in power.  The standard machine gun is supplemented by an unlimited supply of grenades.  The laser is deceptive in that you’re shooting rockets instead of beams of light.  My personal favorite would the shrapnel gun, which ends your rockets in a three way burst.  Unlike in Contra the spread gun here is useless; its random bullet spray is too short to be effective.  The flame thrower is the most powerful, making up for its lack of finesse with destructive power.  All of this firepower comes in handy but also makes it easier to kill hostages with friendly fire, penalizing you 500 points.  Thank god saving them is optional.

The pace of the game is incredibly frantic to a degree rarely seen on the NES.  The game is dense with enemies and although every level is a more or less straight line to the end it they all feel like a damn war zone.  There are very few obstacles in your path leaving the focus on the action and the game does so with much fanfare.  Very rarely will you ever encounter less than 3 soldiers at once, with that number usually tipping 8-10.  If the goal was to replicate the feeling of an entire country marshaling its forces against you Guerrilla War more than succeeds.

As you can imagine all the chaos pushes the NES to the breaking point and it can’t keep up.  Guerrilla War has the NES processor in the choke hold and the game flickers worse than you’ve ever seen.  We’re talking sprites that straight up disappear for seconds at a time.   It’s understandable when there are upwards of 10 enemies, bullets, helicopters, and hostages running around and while it’s annoying it doesn’t happen so frequently that it ruins the game.

All the chaos borders on the absurd at times, a fact that the game seems to revel in.  Games like Contra share the same general premise of one man (or two) against an entire army but never take it to this extreme.  Just one level alone will see you gun down at least 100 troops, save about 20 hostages, fight a helicopter or two and culminate in a battle against a tank.  You’ll also save POWs by using a whip while riding a speeding mine cart and no I didn’t make that up.  Oddly enough shooting farm animals will net you 1000 points while saving hostages only gives 500.  If you’re an asshole who can’t control his gunfire your going to kill a few of them which deducts 500 points.

Uh, yeah, that happened far more than it should have during the course of the game.

Speaking of hostages, if there’s one thing Guerrilla War has taught me it’s that I’m the last person you should ever send on a rescue mission.  If the game kept a running tally of everyone caught in my friendly fire I’m sure it would eclipse triple digits, making me a mass murderer the likes of which planet Earth has never seen.  Considering the game can be completed in an hour or so that’s a god damn accomplishment.

Despite the seemingly insurmountable odds the game is made easier with infinite continues and frequent extra lives.  If you can actually avoid killing civilians the free 1000 points start to add up and you’ll be swimming in extra lives.  Although the weapon list is small they’re all overpowered and will make short work of nearly everything in your path provided you aren’t sloppy.

At 12 stages this is a lengthy endeavor and some of the best run and gun action available on an eight bit console.  As an arcade port its excellent, as a game its phenomenal.