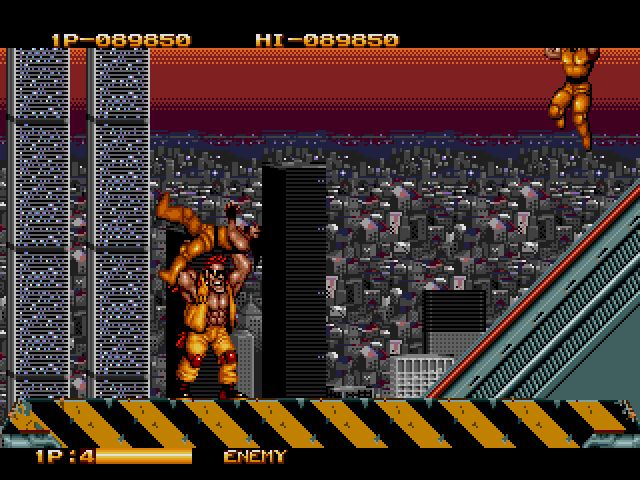 I think we can all agree that Bad Dudes was an average game overall.  Despite the game’s cheesy premise the game play was strictly average at best.  But we were able to overlook that for some gold old fashioned beat em up fun, at least for about 30 minutes.  Take away the cornball story and you’re left with Two Crude Dudes, a loose follow up that does little to bring the game play up to acceptable standards.

There are no ninjas kidnapping the President here. Taking a page out of Mad Max and Fist of the North Star nuclear weapons along with chemical warfare has ravaged the New York City, leaving it a home for mutants and the remnants of society.   An organization called Big Valley has plans to take over the city, leaving the President no choice but to rely on two crude mercenaries to clean up the mess.

As Crude Buster in the arcade the game never really took off like its predecessor.  As a home console port Two Crude Dudes is pretty comparable to the arcade machine but faced stiffer competition in the form of Streets of Rage.  While it had its frustrating moments the relative depth to its combat made Streets of Rage an enjoyable ride from start to end, not to mention the graphics and ridiculous soundtrack.  Two Crude Dudes has none of this, and is a shallow brawler that will leave you bored after the first few levels.

Two Crude Dudes commits the biggest sin of the brawler genre in that it has an extremely limited move set.  You’re armed with basic punches, kicks, a jump kick (if you can call it that) and can roll.  That jump kick is pretty lame in action as you’re overly beefy dude barely lifts off the ground.  Although restricted to a 2d plane you can still climb platforms and buildings provided you can tolerate the pathetic jump height.

Perhaps the lone feature that stands out is the ability to pick up and throw nearly everything.  If you see it and it’s not bolted down chances are you can chuck it.  Sticks, boxes, poles, enemies, cars, even mobile transports are fair game.  Hell, if you’re playing coop you can throw each other!  It seems obvious that the designers realized this as the ground is littered with objects to bat around.  It takes a second to adjust to having a separate button for throwing but it comes in handy if you want to just kick the shit out of a punk without chucking your current item.

The game’s premise is silly and that is born out through the comic book style sound effects.  The protagonists as well don’t seem to take the situation seriously either, and will flex and wink at the drop of a dime.   But all the charm in the world can’t change the fact that the game is boring.  Most enemies are taken out with one or two hits and are so brain dead they’ll simple run straight into your fists.  The game is more than generous with continues and outside of the bosses there is no challenge to be found.

Speaking of the bosses, in stark contrast to the generic mooks and mutants these bastards are a cantankerous bunch.  They have insane reach, especially the second and third boss.  One other facet I hate, after each hit they are temporarily invincible, either that or the collision detection sucks.  Regardless of the challenge posed I can guarantee that you’ll finish the game in an hour, no sweat.

I never thought highly of Bad Dudes and Two Crude Dudes does little to set it apart from that game quality wise.  There are better beat em ups on the Genesis to think about before bothering with this one.