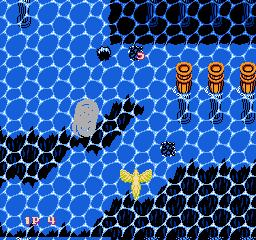 Being young and a video game fan was pretty damn rough back in the 80s and 90s.  With no job parents and relatives were the main source of new games, and I can safely say for the majority of us that only happened on birthdays, Christmas and the odd holiday.  As such amassing a large library of games was nothing but a dream for most and in my case there was a point when Legendary Wings was the only NES game I had.  Those were dark, dark days man.  It goes without saying that I played it six ways from Sunday, but was it any good?

Legendary Wings was released in arcades by Capcom in 1986 with the NES port following 2 years later.  Mankind has built a supercomputer called Dark which has assisted them in creating utopia when it suddenly goes berserk.  Two warriors are given magical wings by the Greek God Ares to save the world from the renegade supercomputer.  The game’s Greco Roman architecture meets future look was definitely unique for the time and actually still is today.  Legendary Wings was one of many in a long line of vertical shooters from Capcom and while better than early efforts like 1942 is still only slightly better than average.

A mish mash of fantasy elements combined with futuristic technology Legendary Wing’s unique setting and 2-player coop distinguished it from its arcade brethren along with its gameplay elements. The NES port is a more than admirable conversion given the disparity between the two pieces of hardware and actually improves on the arcade original in a number of ways much like Bionic Commando.  However this was a flawed game originally and as such the home conversion shares the same issues.

Both horizontal and vertical shooting are given equal parity as each level is split into 2 parts.  On the overworld you are equipped with a pistol and bombs for ground targets.  Power-ups come in the form of P icons with your pistol being upgraded up to 5 times, each more devastating than the last.  A significant change from the arcade is less icons needed to upgrade; a single one instead of two.  The weapons have also been redesigned and differ drastically in there functionality.  The twin laser is bigger and now more distinct.  The second upgrade is now an intense beam of fire which is incredibly powerful.  Unfortunately the third upgrade is a single shot with two rebounding balls accompanying it; its terrible but a necessary step towards the final upgrade which turns you into a phoenix with an almighty wave attack that kills most enemies in one shot.

These also function as a life bar of sorts since enemy bullets will downgrade your weapon rather than outright kill you.  The final power-up, the Phoenix allows you to take 3 hits before this happens, making the game incredibly easy.   Most shooters derive their intensity from 1 hit deaths but with the odd exception that rarely occurs here.  As a whole the game is a lot more manageable than the punishing coin op but does see a sharp spike in difficulty once you reach space.  Like nearly all shooters once you’ve been downgraded to the standard pistol you might as well give up but honestly you would have to be flat out terrible at the game for that to happen.

The most striking change comes from the side scrolling segments.  You are no longer forced to fight on foot and can fly freely which makes these already slow portions of the game far more tolerable.  The palaces feature side scrolling with some at times tricky level design that will kill you if you aren’t careful.  These segments are much easier because the game can’t really place turrets or enemies in any out of the way areas you can’t reach.  The lack of challenge in a genre known for its frenetic pacing is the least of the game’s problems.

The game is highly repetitive,  not just in the shooting department but the game’s entire structure.  Every level features the exact same elements at the same points too: a guardian that attempts to suck you into the underworld for a brief side scrolling stage a quarter of the way through, the same grouping of demon statues near the end, and the same two bosses on every level, with no change in look or tactics.  You have very little to look forward to aside from the change in setting on each new level.   Repetitive level design and a severe lack of challenge ultimately lead to boredom.  I still can’t believe I played it daily when it was my only game; I guess that shows how addicted I was to video games.

It’s not exactly terrible but it isn’t great either.  There are better shooters on the platform that you can spend your money and time on.  Life Force for example features everything Legendary Wings has to offer and is a superior game to boot.