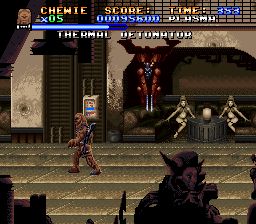 It was only a matter of time before George Lucas would bring his Star Wars licensing monster to the 16-bit consoles and the SNES was the lucky recipient of the onslaught.  Super Star Wars was the first, naturally, and would set the tone for the ones to follow.  Considered one of the best games in the series it still holds up to this day aside from some nicks and bruises.

Super Star Wars was released in 1992 by JVC.  Generally following the plot of the movie with concessions made for gameplay reasons, it hits on all of the major plot points and uses its rich source material to create an action packed thrill ride.  This could easily have gone the way of many Acclaim movie bombs but kudos to LucasArts for taking the time to make an excellent product.

Luke is armed with a blaster that can be upgraded up to 4 times with the Lightsaber coming in a bit later.  Comparing the two, the blaster is far more useful because of its range; with the Lightsaber hit tracking is incredibly iffy.  There is extensive platforming to break up the stop and go action and thankfully the controls are able to get the job done for the most part.  A Star Wars game would not be complete without vehicles and the SNES Mode 7 is put to work in 3 of the levels as you control a Land Speeder and X-Wing.

Across 11 levels you’ll revisit the best moments from the movie.  From the dusty sand dunes of Tatooine, the busy streets of Mos Eisley, and even the Death Star Trench run.  When you break it down the Star Wars movie took place in only two places for the most part and that would be boring so instead they were broken down into multiple stages.  Prior to the N64 games this was the best way to experience piloting a Land Speeder or stepping into Luke’s shoes to make that fateful shot in the Death Star.  Some of the later stages allow you to control Han Solo or Chewbacca, each with their own attributes and weapons.  This was almost the complete package.

And that is because of its two biggest flaws: the controls and the ridiculous challenge.  For the most part Luke is nimble and reacts almost instantly to commands but that falls apart anytime you hit the jump button.  You have two jumps, a short hop and a higher flip but making Luke perform either of the two is infuriating.  You can still control his descent but his body flails around so much it’s near pointless.  This makes all of the platforming a nightmare, with every leap possibly causing you to lose nearly 10 minutes of progress.  Backtracking is the last thing you want to do because the enemies are relentless with infinitely respawning enemies and plenty of cheap hits to go around. I can guarantee you’ll enter most boss battles with less than optimal health.   As long as this game is it’s a crime not to have any kind of battery backup or passwords.  At least LucasArts fixed this flaw with the sequels.

These flaws aren’t enough to completely knock the game off the hit list however.  The core action is accomplished pretty well and if you have even the slightest interest in the Star Wars universe there is no reason to miss out on one hot platformer.  This was an excellent foundation for the sequels to come.