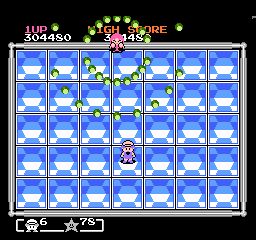 I’m pretty sure most aren’t aware how long Pokemon developer Game Freak have been in the industry.  The few who were lucky enough to have the Sega channel might have played their Megadrive title Pulseman in 1995 but their history goes back even further.  Game Freak got their start on the Famicom with Quinty, released in the US as Mendel Palace.  As a smaller release it flew under the radar however Hudson Soft did at least market the game with commercials, which worked on me as I rented the game never suspecting that it would become one of my favorite puzzle games of all time.

The story is largely irrelevant and only provides context to the proceedings.  Bon-Bon (they really couldn’t think up a better name?) must save Princess Candy from her own dreams which have become a series of nightmarish palaces.  The game’s US box art and title screen give off the impression that you’ll be facing a punks straight out of Double Dragon when they are in fact the dolls that inhabit each level.

Mendel Palace is based around a simple premise; that of flipping tiles.  Your sole means of offense is the ability to flip over adjacent tiles.  Each level is composed of a 5×7 grid of tiles with the goal of defeating every enemy present before moving on.  By flipping the tiles enemies are standing on you can send them flying into walls or blocks which is the only way to defeat them.  There’s no telling what lies underneath each square and sometimes kicking up the same tile will yield more than one item.  There is no visible clock on screen however each level is timed and once you’ve gone over the limit all enemies enrage and will aggressively hunt you down.  Chances are you’ll only last a few seconds once this occurs.

It’s a simple premise that is given further depth by numerous factors.  There are an army of different tiles you will encounter throughout the game that produce a variety of effects, some that help and some that are a hindrance.  Star tiles are basically this game’s version of coins, awarding an extra life at 100.  Spinner tiles send you careening in given direction, destroying any enemy in your path.  Shockwave tiles flip over all tiles in the direction the wave is facing.  Sun tiles will usually kill every doll present while the rare Moon tiles lead to a bonus stage.  The absolute worst is the portal tile which spawns new dolls to ensure that there are always six present until flipped.

Each palace is populated by a specific type of doll that presents different challenges based on their conduct.  Sumo dolls don’t fly that far back when flipped and in retaliation will stomp and flip the tiles around them.  Swimmer dolls actually swim through the floor and flip the tiles in their wake.  The annoying copycat dolls mimic your movements and are frustrating to deal with.  The artist dolls can render tiles immobile which you can take advantage of; if you can cause a stalemate by having all tiles unflappable you win.

The setup of 10 levels per palace occupied by one lone enemy type could have become tedious however the excellent level design and near perfect difficulty curve keep things exciting.  The first few rounds of each palace introduce each doll and their behavior and gradually introduces new mechanics to contend with.  Sometimes a room will be filled with 5 second tiles that shave time off the clock and force the dolls to enrage in seconds.  Or a nightmare scenario, a room filled with portals that can take close to 6 minutes to clear compared to the minute or less average.

The difficulty spikes closer to the end of each palace and culminates in a vicious boss fight that can be fairly cheap to clear.  Nearly all of the game’s bosses can transform you into a random doll, bestowing their strengths and especially weaknesses.  Trying to win as a Swimming doll nearly made me punch a wall as it seemed their attack method rarely worked.

As much as I do like the game there are some large flaws that weigh it down.  This game practically screams for eight way movement yet you are limited to the four cardinal directions.  Coupled with Bon Bon’s slow walking speed the late stages of the game are downright unfair as six dolls converge on your location at a hellish pace you can’ t match.  The biggest ass kicker is the lack of battery back-up or passwords.  This is a long game with over 100 levels in all.  Granted most of them can be completed in a minute or so but to have to start over to continue your progress hurts.  Since the game allows you to choose your starting palace you aren’t forced to replay the same stages you’ve previously completed in a different run so there’s at least that.

The variety in enemies and items and there effect on the game is what makes Mendel Palace such a joy to play.  Even without any means to save progress I would still recommend it.  It isn’t a classic like their later works however Mendel Palace did show that Game Freak had a knack for creativity, one that would eventually take the industry by storm.