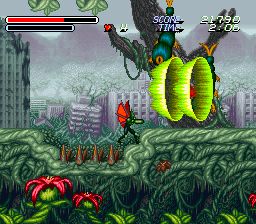 I’ve never been much of an import guy for the simple reason that it is frustrating to play a game without the slightest clue about what’s going on.  But there are legions of games where the language barrier is non-existent and these I enjoy.  Majuu Ou (or King of Demons) was a late Super Famicom release in Japan that could have made the trip overseas with little effort as there is only about a page of text.  It’s a damn shame too as it is an excellent game with beautiful graphics and thoroughly engaging gameplay.

Abel is on a journey to Hell to rescue his daughter after his best friend Bayer betrayed him.  It seems Bayer sacrificed Abel’s wife and child for power in order to resurrect the King of Demons.  A sacrifice from his wife gives him the power needed to reach the lower depths of hell to save their daughter.

There are many ways to describe King of Demons.  Castlevania with a gun, Altered Beast done right and they are all accurate to some degree.  Initially Abel is only armed with a pistol and looks a bit dorky in his t-shirt, jeans, and bandana.  After getting his ass handed to him by Bayer the pistol becomes more powerful and Abel more agile.  Ammo is not a concern and you don’t have to aim; anything in your path will get hit.  The platforming staple double jump is present as well as a roll to avoid damage.  Aside from the gun you can perform a downward kick attack that’s hard to land but fairly powerful.  You can also charge up your gun for a Force attack, a short range hadoken-esque burst.

These abilities are serviceable for the first few levels but after you defeat your first major boss the Altered Beast connection comes in.  Bosses drop a jewel whose color (red, blue, green) corresponds to a different demon form with significantly enhanced abilities.  The red jewel changes you into a harpy with a boomerang attack and a larger charged fireball.  Green is a sort of lizard hybrid with wings who shoots laser beams from his palms.  Blue is a dragon with the most powerful basic attack that suffers from short range.  The power comes at a price as he is also the largest, making it an easier target.

It’s extremely cool and has plenty of depth.  There are a wide variety of demon forms in the game to play around with; choosing the same form three times will upgrade it with vastly superior abilities. I’m not the biggest fan of the Green Centurion however once upgraded its thin laser is three times thicker and its Force attack more destructive.  If you try out each form at least once than you are gifted with an ultimate demon form that makes the game considerably easier.  The game is long enough that you can play around with each form at least once and its great incentive to at least replay it a few times.

Aside from their slight differences in terms of attack and damage received the form you’ve chosen will have a significant impact on the level of difficulty for each proceeding stage.  There is no one specific choice that excels per se however certain attacks can make a huge difference.  The harpy’s boomerangs make the demon train easier to handle since they cover a wide range and if they miss they’ll catch the floating demons on the way back just as an example.  Overall however the game is a bit on the easy side outside of the at times brutal boss battles.  Technically you can avoid the gems and stay human for a challenge but you’d have to be out of your god damn mind to try and complete the game with the pistol.

The world in which the game takes place in suitably darker in tone than most of the game’s released in North America.  Like something out of Shin Megami Tensei there are an equal mix of real world cities and demonic environs to explore and the designers have come up with some pretty imaginative demons to face.  This can be a pretty gory adventure at times as zombie’s heads explode, pulsating hearts bleed when struck, and in one disturbing instance, two Minotaur take turns beating a crucified woman in the stomach with giant bones.  By 1995 when this was released Nintendo of America had long since become lax about explicit content but I can see how even this may have been too much for them.

As a late release King of Demons is an exquisitely beautiful game and holds its own against the likes of Demon’s Crest and Donkey Kong Country.  The small character sprites are disappointing however they allow the developers to pour lavish amounts of detail into the backgrounds.  The backdrops are insanely detailed with many flourishes that add that master touch.  The city overrun with plants is probably my favorite in terms of design, with foreground objects and a really pretty distant locale.  While the fodder enemies aren’t so impressive the bosses are large and in charge, often screen filling.  Mode 7 and other transparency effects are kept to a minimum so the game relies strictly on its art which is more than up to the task.

It really is a shame that King of Demons was never released in America as it would have been an excellent addition to the system’s library.  Thanks to the work of Aeon Genesis it can be enjoyed in English but there is so little text that it doesn’t matter.