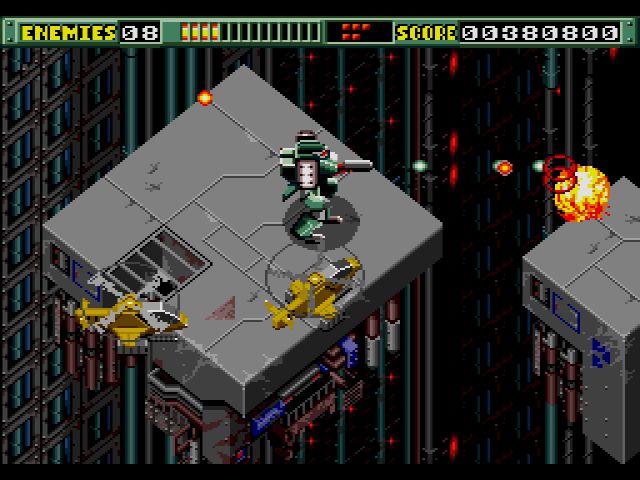 You have to give Wolfteam/Telenet credit, they certainly tried their hand at every genre during the 16-bit era.  While they weren’t all success stories (Earnest Evans, yikes!) most of their output was at least solid.  The Final Zone series certainly had a rough start, with an absolutely terrible first entry for Japanese PCs.  Its sequel for the Turbo CD turned out better but is also saddled with some of the worst voice acting committed to a disc.  Though titled simply Final Zone this is not the first in the series and in fact goes for a different tact gameplay wise, one that isn’t entirely successful.

Rather than a traditional top down shooter the view has shifted to an isometric perspective.  The NAP is incredibly for a game of this type and reduces your field of view but it isn’t as obtrusive as it seems.  Along with the shift in view comes a new gameplay focus.  Each mission tasks you with destroying a set number of targets within a confined area before moving on to the end level boss. Locating these targets is easier said than done however.  They spawn randomly and roam the environments.  Despite what might appear to be large zones to explore are actually smaller levels about four screens in length that loop around.  It’s similar in a way to Thunder Force 2 minus the borders.  It’s uneven as sometimes they’ll appear in groups and attack all once while other times you might have to wait minutes in between.  They aren’t the only opposition you’ll as there are smaller drones that will also chip away at your life bar.

Boss fights occur in closed off arenas, limiting your range of movement.  Whereas the rest of the game suffers from repetitious enemies most of these encounters are unique.  The first stage pits you against a military train in a fast paced scrolling segment.  Other levels see you face other NAPS suits that are even more mobile than your own.  There are a few disappointing encounters in the bunch with the Spider Web and final boss coming across as retreads.

While I can appreciate their attempt at making the game more unique compared to its staid predecessors the isometric angle brings with it a number of problems.  Like Landstalker and Arcus Odyssey before it the trying to turn and face the exact angle you want is a pain in the ass.  It worked for those games since they were slower paced action RPGs.  For a twitch action game however it’s heavily flawed and not as responsive as it should be.  If you happen to be moving while shooting you’ll strafe rather than turn around; you need to stop before turning, almost like a 2d representation of tank controls although not as bad.  The camera is also zoomed in pretty tightly and combined with your large suit makes the already confined levels seem even more claustrophobic.

The larger mech allows you to store a host a number of weapons, close to twenty in total.  It sounds like a lot but in reality the majority are simply variations of each other which is lame.  What is cool is that you can equip each as primary or as a secondary option which both have their benefits and drawbacks.  Primary fire is unlimited but weaker while options are more destructive but limited in ammo.  It might seem like a bit of overkill to have so many armaments at your disposal however as you take hits your weapons are destroyed until you are left essentially defenseless.

At seven levels this isn’t a long journey but it will take some time before you see the end.  Continues are limited depending on difficulty level, with five on easy, three for normal and a single one on hard.  With the myriad control issues you are guaranteed to suffer a few cheap deaths here and there and there are no lives.  They don’t even refill your life bar after a brutal boss battle either.  I’ll warn you now that the game’s conclusion is not satisfying at all.

The game’s presentation is a mixed bag.  The sprites are larger and sharper with far more detail befitting its grittier art style.  The animation is lacking however.  The frame rate is wildly inconsistent with enemies that seem to literally teleport around the map rather than move at a normal pace.  The jittery frame rate also affects your movement where sometimes you’ll move two times faster than you want with no enemies present, leading to cheap collisions.  The backgrounds pack a fair amount of detail considering their size and the game does have its moments.  The lack of animated cutscenes is to be expected going from CD to cartridge however the game completely does away with any story which is a shame as the prior games despite their faults could at least claim that much.  The music is pretty nice as once again Wolfteam standby Motoi Sakuraba scored the soundtrack.  I simply wish there were more unique pieces as a few tracks are recycled throughout.

While Final Zone is certainly a better game than the other games in the series that isn’t saying much.  For an early Genesis title it is decent but doesn’t hold a candle to the system’s finest.  Better action games were released shortly after this hit shelves rendering it obsolete.