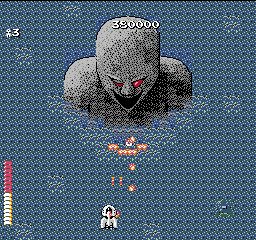 Star Soldier was one of the first big shooters for the NES after Gradius and Xevious and would go on to become a staple in Japan with yearly installments.  Starship Hector was the 1987 entry and is somewhat of a bastard child as it completely throws out everything established previously.  Which isn’t bad necessarily but I can see how it might not be everyone’s’ cup of tea despite being a better game than its prequels.

Known as Hector ’87 in Japan this has more in common with Xevious and Lifeforce than the prior games in the series.  Going completely against shooter tropes there is a life bar otherwise the game would be almost impossible.  Your ship is equipped with a Vulcan cannon for airborne targets and bombs for ground based foes.  And that’s it.

There are no additional power-ups and honestly I don’t like it.  What the hell is a shooter without cool weapons?  Surprisingly still a decent game in spite of the fact the odds are heavily stacked in the enemies’ favor.  The game wastes no time tossing the player to the wolves as even the first level (each level is referred to as History for some reason) is a manic hailstorm of enemy fire that doesn’t let up until the credits roll.  Or you hit the game over screen.  Without overpowered weapons to fall back on survival relies on your piloting skills.

It’s no exaggeration to say this is one of the most difficult shmups available for the NES as bullets fly freely and the enemies even try to suicide bomb you.  With the screen so heavily cluttered it’s actually better to avoid adding to the chaos, especially as most ships explode in a further spray of bullets.  In spite of your life bar it’s still possible to die in one shot through head on collisions with walls or other objects.  Boss battles are especially guilty of this and it forces you to play as though one shot equals death at all times.

Like Life Force and Stinger the levels alternate between horizontal and vertical shooting action though Hector doesn’t manage its balance as well.  The vertical levels are the most difficult as it is very hard to discern which targets can be only be destroyed using bombs or airborne fire.  Titles like Legendary Wings have done a better job distinguishing the two.  To Hector’s credit you can throw both at once but its’ still frustrating to deal with.  The horizontal stages are far simpler and bear a heavy resemblance to Stinger in their graphics.  Hell if you added some bells this would be outright plagiarism.  Much simpler in scope it’s easier to keep track of on screen elements though stray bullets are harder to avoid due to less screen real estate.

At a mere six stages this is a pretty brief engagement but in my estimation only the most dedicated shooter fans will see the end, especially as there are no checkpoints.  This would be the first in the series to introduce the two and five minute modes, perfect for those that like competing for points but due to the jarring gameplay it isn’t as compelling as the later Turbo Grafx titles.

Considering it was released in 1987 Starship Hector looks considerably better than similar titles in the genre released in the same timeframe.  To say nothing of its superiority over its sparse predecessors.  Since the game isn’t confined to space you’ll visit more varied terrain which seems heavily Incan influenced.  Some of the bosses are pretty impressive if you can actually make it that far but you’ll see them for only brief periods since you’re more than likely going to die in seconds.  I wish I could say the same for the music but it’s largely forgettable.

Despite the extreme difficulty Starship Hector is a decent title that could have turned out worse considering it breaks from most shooter conventions.  It’s definitely the best of the three titles in the Star Soldier series for NES but that isn’t saying much considering their age and the competition available.