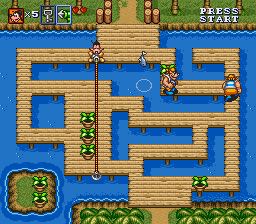 While licensed video games have been a staple of the industry almost from its inception sometimes you have to wonder what the hell goes through a publisher’s mind (aside from potentially easy money) when deciding to pick up a particular license.  How the hell do you create a compelling video game based around ET anyway?  Or how about Absolute creating a generic platformer out of Home Improvement, you know the show about a goofy handyman?  Some properties simply don’t lend themselves to conventional game mechanics, especially in the 80s and 90s.

If you would have asked me years ago Goof Troop would have fit in that category.  Unlike its Disney contemporaries the Goof Troop cartoon wasn’t based around high adventure but was more comedic in tone.  Ducktales has the decade’s long comic book history to draw from and Rescue Rangers was all about solving the latest mystery of the day.  Yet somehow Capcom were able to create a light Zelda inspired adventure for the younger set that actually works and were it not for its brevity would be pretty excellent.

As one of the first titles designed by Resident Evil’s Shinji Mikami you obviously won’t find any elements from that legendary series here.  Goof Troop has more in common with the Legend of Zelda and Pirate Ship Higemaru, one of Capcom’s first games.  As either Goofy or his son Max you’ll visit five locations on Spoonerville Island on the way to saving Pete and his son PJ.  It shares the same pirate theme as Higemaru and its heavy use of barrel throwing but places a heavier emphasis on puzzle solving, hence the Link (heh) to Zelda.

Each level is broken up into a series of rooms that usually have some form of puzzle that needs to be solved before moving on.  Goofy has no means to protect himself normally but can pick up and throw the many barrels littering the environment.  He can also put his hands up and try to catch objects throw from above.  Although you don’t have a life bar collecting enough fruit without getting hit will protect you from one hit.

The puzzles you’ll come across run the gamut of adventure game tropes, from block pushing to switch flipping.  You can hold a maximum of two items at once and will frequently need to drop items for later use.  Truthfully the item list is relatively small but each sees heavy use.  The grappling hook is the most prominent as it be used to cross gaps, grab items, and stun pirates and kill weaker enemies.  The plank will create a bridge and the bell will attract any pirates in the area.  Like Zelda smaller keys open doors while a big key is needed to face each level’s boss.

While the game is perfectly balanced in single player it excels in coop.  Here each player is restricted to carrying only one item, forcing constant communication to get your objectives completed.  You can pass items between players when needed.  Deciding who will carry what and coordinating the use of the bell to trick enemies into an ambush or even to inadvertently complete certain puzzles for you is awesome.  The teamwork aspect of multiplayer is the game’s best attribute but it also makes an already criminally short game even briefer.

If there’s one criticism to lobby at the game it’s that it is too easy.   While there are some clever puzzles here and there it’s nothing you haven’t seen before, meaning most veteran gamers can breeze through the game in an hour or so.  While the threat of death is persistent as you can only take one or two hits you’ll rack up extra lives through general play offsetting this.  The only real challenge comes from the game’s bosses; I just wish there were more of them or even just a longer game in general.  The game is clearly targeting younger gamers and it exceeds but it also plays it a bit too safe and suffers as a result.

Goof Troop turned out far better than anyone reasonably expected and is a solid title that only suffers from a dearth of content.  If the game were longer with a ramp up in difficulty it could have been special.