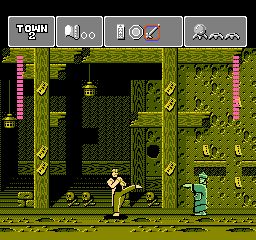 Here’s a title that always eluded me somehow back in the day.  The only review I can ever recall reading for Phantom Fighter was in Nintendo Power and their small write-up made the game seem a lot more awesome than their score would indicate.  Phantom Fighter’s hot pink box art might make it seem like any one of the generic Kung Fu games plaguing the NES library such as Kung Fu Heroes and Master Chu and the Drunkard Hu.  However it’s an interesting little title with some unique gameplay ideas for the time.  Of course being unique will only get you so far and it is in the execution that Phantom Fighter stumbles a bit.

As Kenchi the wandering Phantom Fighter the task has fallen on your shoulders to travel China and rid its towns of Kyonshi, a Chinese hopping vampire.  Along with your faithful sidekick/servant the townspeople will provide items and encouragement in between crying for help.  Loosely based on the movie Mr. Vampire the game maintains some of the film’s comedic tone through the occasional comments from your assistant but is otherwise all business.

The primary goal of all eight towns is to collect the three sacred orbs needed to break the seal protecting the head Kyonshi of each area.  Each town has a number of buildings to visit and you can get a basic feel for what lies inside from your assistant.  Training halls will teach you new fighting moves and temples will replenish your health once you’ve cleared the enemies inside.  If Kyonshi lurk inside you can defeat them and receive ancient scrolls (currency) or helpful items for your quest.  If danger lies ahead it means an orb is inside.

Inevitably you are going to have to fight the Kyonshi and they come in many sizes, shapes, and colors.  Due to their rigor mortis all Kyonshi hop rather than walk and move slowly.  Don’t let that lull you into a false sense of security.  Depending on the type they can cover larger distances in a single bound; some even prefer to swipe at you with their claws.  There’s a decent amount of variety in the types of Kyonshi and learning their patterns of movement is important to survival, especially since the only way to recover health is in temples or picking up one of the orbs.

It’s also key to survival in the beginning of the game since you only have access to a basic punch and kick at the start.  You’ll have to tough it out for at least the first half hour and don’t be surprised if you see the continue screen a few times.  Despite their slow movement the vampires pack a punch and those early battles are bit drawn out due to your character’s lack of skill.  But once you have enough scrolls to buy some new moves the tide turns.

There’s a sizable list of moves waiting to be purchased and they’ll immediately make an impact in combat.  You can divide the skills into three categories, movement, punches, and kicks.  Each town has a limited set of skills to learn with the price increasing as you go along but luckily the number of scrolls gained keeps up.  Honestly if while it is nice to have the option to experiment a bit there are 3 or four skills that are overpowered and literally game breaking.  The side kick can be learned in the second town and not only inflicts massive damage but will usually knock the enemies down.  Once you can crouch and walk it’s easy to get behind the Kyonshi and score easy hits.  And as soon as you can the Mirage Thrust (punch while crouching) the game becomes significantly easier since you can duck and punch all but the shortest Kyonshi in their nonexistent nuts until the fight is over.

Get used to the Kyonshi as they are the only you’ll face for the majority of the game.

That last bit highlights Phantom Fighter’s largest flaw; that it is repetitive.  That tactic would not be so effective if there were more enemy variety.  The only enemies you’ll face during the entire game are Kyonshi outside of two or three encounters with ghosts.  They tried to vary it up with the different colored vampires but it still doesn’t change the fact that they’re all dumb.  Once you crouch they are apparently too stupid to see you and will shuffle back and forth to find you.  If you’ve learned the three skills I’ve mentioned there’s no point killing random Kyonshi since you don’t need any other moves and the items aren’t all that helpful.  It also doesn’t help that later in the game you’ll have to face up to 4 or 5 Kyonshi in a row to earn your scrolls.  At that point you might as well simply visit the three houses that house each orb and complete each town in about 5 minutes and shorten the game.

The gameplay has its problems but graphically Phantom Fighter is pretty impressive.  Wandering around town is nothing special but once you enter a locale the sprites are massive.  The animation is top notch and grows in scale as you learn new techniques although you will grow tired of seeing the same hopping animation for the Kyonshi quickly.  The backdrops are intricately detailed and there are a large number of them so the game never grows dull in that regard.

Though it has its flaws Phantom Fighter still has its heart in the right place.  With a  few minor tweaks it could have been something special but instead will have to settle for slightly above average.